Kinder Morgan Pipeline Spills up to 42,000 Gallons of Gasoline Into California Drainage Canal 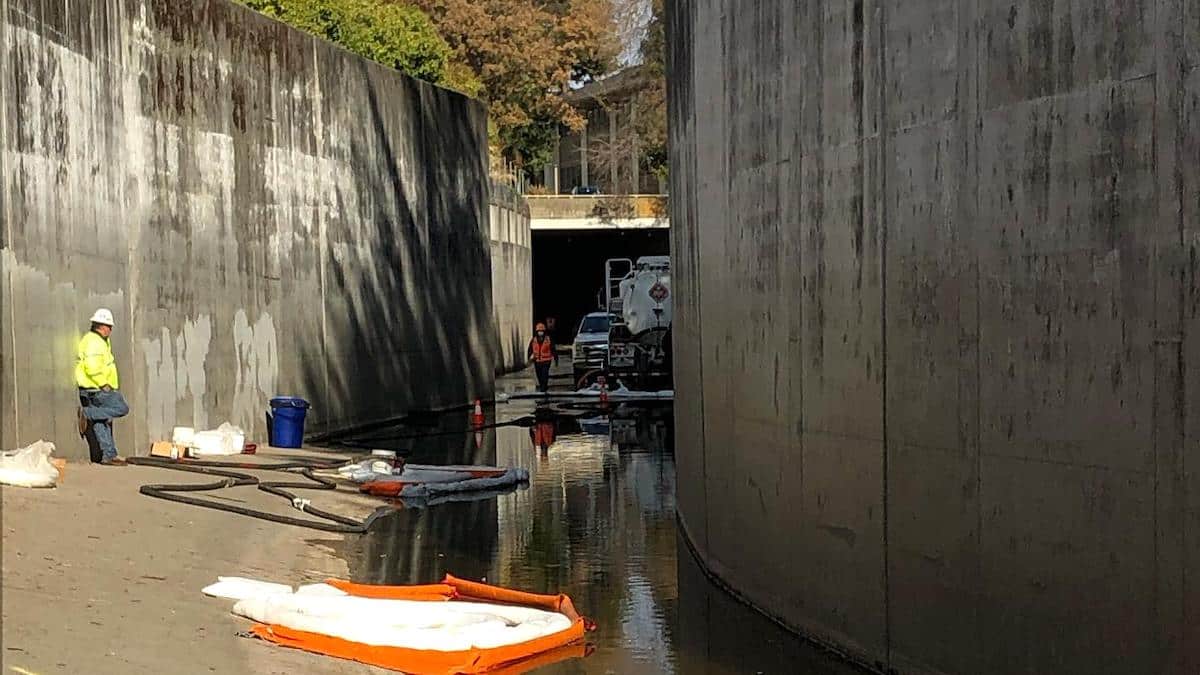 A pipeline leaked tens of thousands of gallons of gasoline into a waterway in Walnut Creek, California. California Office of Spill Prevention and Response / Facebook

A Kinder Morgan pipeline leaked tens of thousands of gallons of gasoline into a waterway in Walnut Creek, California, prompting concerns from residents worried about the company’s safety record.

Locals are mistrustful of the company after a 2004 explosion on the same line killed five construction workers and injured four others, the San Francisco Chronicle pointed out. In this case, area residents say they saw Kinder Morgan respond to the spill before they were informed of what was happening.

“They scared quite a few people on this street and no one was saying anything,” Matt Dooling told the San Francisco Chronicle. “This happened right where the 2004 explosion happened, so when they say that it’s not dangerous, we don’t really believe them.”

The story began Nov. 20 when company officials first noticed a pressure drop on part of the pipeline that runs between Concord and San Jose, The Mercury News reported. They shut down portions of the pipeline at the time, but then a worker reported the smell and appearance of gas in a drainage canal Dec. 2.

“We immediately shut down the pipeline and isolated the area,” Kinder Morgan spokeswoman Melissa Ruiz told The Mercury News.

Dooling told the San Francisco Chronicle that he observed Kinder Morgan workers examining the canal Dec. 2 while walking with his daughter, but that he and other neighbors were not given an explanation until days later.

Officials first thought the two incidents were not connected, but later determined that tree roots had wrapped around the pipeline, causing it to crack and gasoline to leak out. The gasoline had then travelled about a mile and a half downstream to the canal. It moved along a gravel bed beneath the canal’s concrete bottom. All told, an estimated 31,500 to 42,000 gallons of gasoline leaked out, CBS SF reported.

The incident has prompted an investigation and cleanup operation involving multiple agencies. There are no reports that wildlife has been harmed, but crews continue to observe local animals.

“If more of the fuel reached the canal, we would have a bigger problem with wildlife potentially being impacted,” Eric Laughlin, a spokesman for the California Department of Fish and Wildlife, told The Mercury News. “Since a lot of it is still underground, it’s not as catastrophic as it would be if it were in open water.”

The canal is also designed to control flooding and does not feed into public drinking water.

It is not yet known when the cleanup will be complete, but the pipeline was expected to resume operations Wednesday, Ruiz said.

Kinder Morgan is one of the nation’s largest energy companies and manages around 83,000 miles of gas pipeline. It was the owner of the controversial Trans Mountain pipeline and its planned expansion until the Canadian government purchased both in 2018.

After the 2004 explosion, it was found that Kinder Morgan had failed to mark a bend in its pipeline. This enabled it to be pierced while a water main was being installed, sending a fireball seven stories into the air, the San Francisco Chronicle reported. Kinder Morgan was found guilty of six felonies in 2007 and ordered to pay million. It also paid tens of millions of dollars in reparations to victims and other fines.