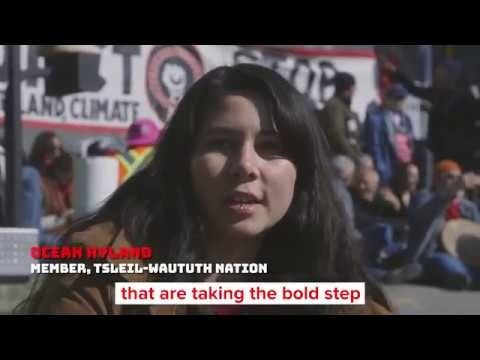 Despite a court-ordered injunction barring anyone from coming within 5 meters (approximately 16.4 feet) of two of its BC construction sites, opponents of the Kinder Morgan Trans Mountain pipeline expansion sent a clear message Saturday that they would not back down.

Twenty-eight demonstrators were arrested March 17 after blocking the front gate to Kinder Morgan’s tank farm in Burnaby, BC for four hours, according to a press release put out by Protect the Inlet, the group leading the protest.

According to the release, the protesters were a mixed group of indigenous people, families, retired teachers and other community members.

“We’re going to do whatever it takes, and by any means necessary, and we’ll show up day after day until we win this fight,” Treaty-6-Mathias Colomb-Cree-Nation member Clayton Thomas-Muller said in the release.

Saturday’s action was an intentional show of civil disobedience.

“Everyone was very aware of the situation, of the possibility of arrest. And everyone was given the chance at any time during the day to leave that zone and not be arrested,” Amina Moustaqim-Barrette, protestor and 350.org communications coordinator, told the Vancouver Sun.

According to the Protect the Inlet website, Saturday’s action will kick off a two-week mobilization from March 18 to March 24. The activists need to prevent Kinder Morgan from completing key clear-cutting work by March 26, when the return of migratory birds will cause delays.

According to 350 Seattle, the Trans Mountain pipeline expansion project aims to triple the amount of Alberta tar sands oil carried from the Canadian Rockies to Burnaby, BC and Anacortes, WA from 300,000 to 890,000 barrels per day. It would also increase oil tanker activity in the Salish Sea and Strait of Juan de Fuca by 700 percent, threatening vulnerable orca populations and other marine animals.

The Trudeau government approved the Trans Mountain expansion in November 2016, but the social action group the Council of Canadians says it is inconsistent with Canada’s commitments to reduce greenhouse gas emissions under the Paris agreement. It is also opposed by over 61 indigenous groups; of the nine cases challenging the project in Canadian courts, seven were brought by First Nations.

Saturday’s action comes exactly one week after indigenous leaders from the U.S. and Canada inaugurated a traditional Coast Salish “Kwekwecnewtxw” or “a place to watch from” in the pipeline’s projected path. While construction started on the Watch House, 10,000 demonstrators marched in solidarity.

“I’m sensitive to the concern of those who created this Watch House, that it is of considerable significance to them,” Affleck said, further ruling that the pipeline could remove it only if it demonstrated an emergency need, and that it would have to replace it afterwards.

Saturday’s protest wasn’t the only direct action against the pipeline expansion this weekend. 30 “kayaktivists” from a group called Mosquito Fleet surrounded a Kinder Morgan oil barge in Seattle’s Elliott Bay Sunday to protest the increased tanker traffic the project is slated to bring to the Salish Sea, King5 News reported.

Mosquito Fleet’s Zara Greene told King5 that the pipeline expansion would threaten communities on both sides of the U.S.-Canadian border. “Kinder Morgan is a threat to us all,” she said.

There is a Kinder Morgan oil barge coming in right now! We say #StopKinderMorgan!No more oil Barges in Seattle! https://t.co/ZYpxP2Jy11