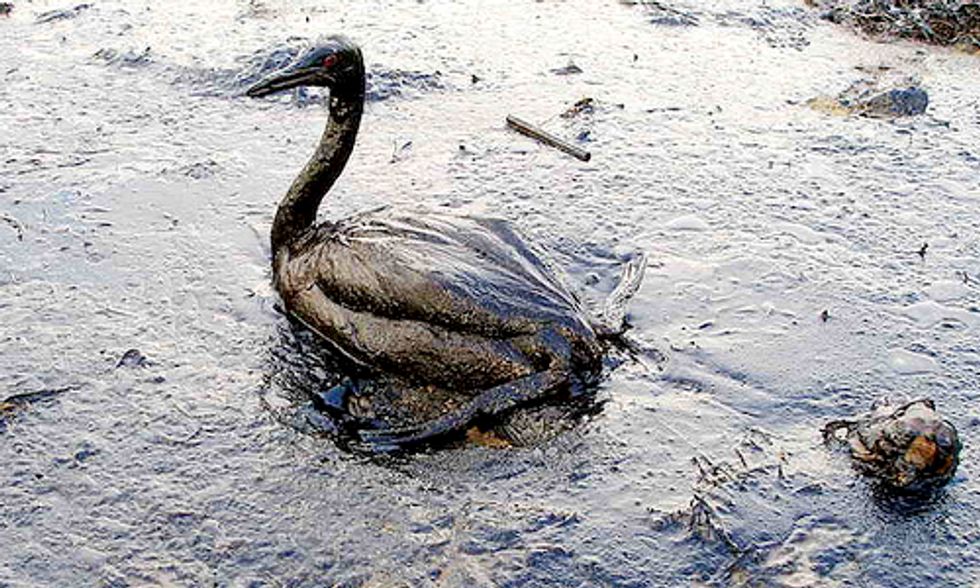 Whether it's a Congresswoman claiming human-caused global warming is unproven, an energy company trying to apologize for an explosion with pizza or a news network telling a respected journalist not to utter the phrase ‘climate change,' you probably think you've heard it all.

Nope. Not even close.

Kinder Morgan's slogan is "A Different Kind of Energy Company," but its latest argument for expanding an oil pipeline is just ridiculous. The firm wants to triple its pipeline capacity from Alberta to Burnaby, so it is arguing that oil spills can actually have positive impacts.

“Pipeline spills can have both positive and negative effects on local and regional economies, both in the short- and long-term,” the company said in a submission to Canada's National Energy Board, the Edmonton Journal reported.

In analyzing various scenarios and the environmental impact on bodies of water like the Fraser River, Kinder Morgan's 15,000-page submission states that the company believes it is a low risk for an oil spill. Still, some predictably can't wrap their head around the "positive" statement.

“We know Kinder Morgan is using every trick in the book to push this pipeline through our community, but this takes the cake—proposing that a spill would actually be good for the local economy,” said Kennedy Stewart, a member of Parliament for the Burnaby—Douglas electoral district.

“This assertion shows the utter disregard this company has for British Columbians.”

A Canadian representative from the Texas-based company told the publication that's not the case. Essentially, the company was following instructions provided by the government.

“No spill is acceptable to us,” Michael Davies of Kinder Morgan Canada said in an email to the Journal. “While we are required by the National Energy Board to explore both the positive and negative socio-economic effects of a spill, it in no way means we accept the inevitability of a spill, nor justify one.”

Greenpeace has protested Kinder Morgan activity in Canada in the past year, including a day-long demonstration at an oil storage facility in Burnaby.