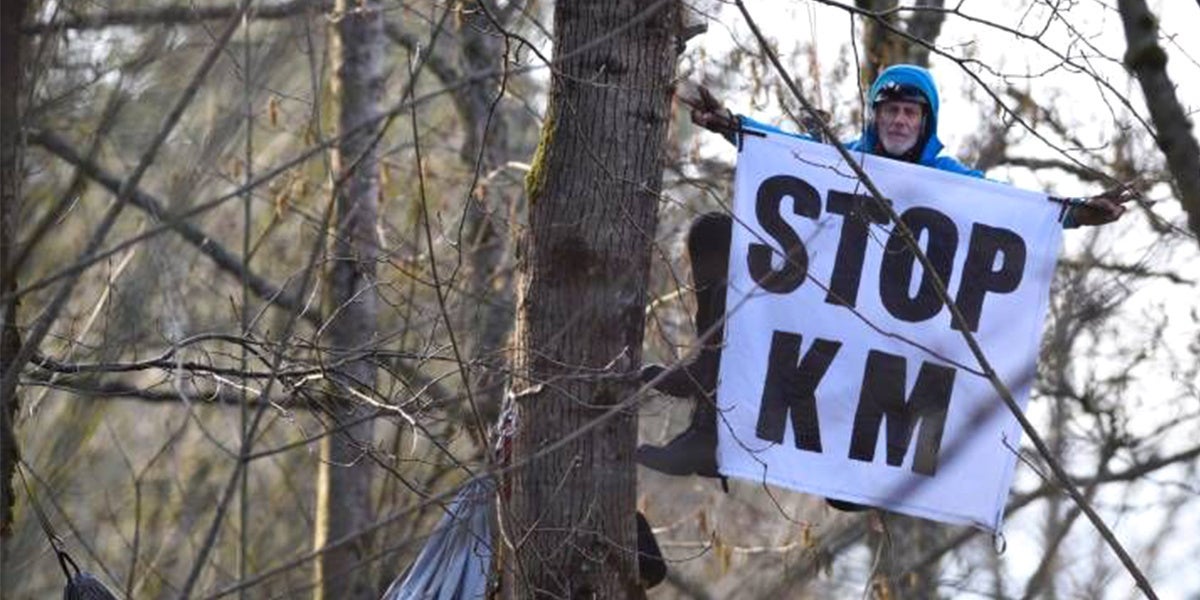 Just because you get older, it doesn’t mean you cannot stop taking action for what you believe in. And Monday was a case in point. Two seventy-year-olds, still putting their bodies on the line for environmental justice and indigenous rights.

Early Monday morning, the first seventy-year-old, a grandfather of two, and former nominee for Canada’s Juno musical award, slipped into Kinder Morgan’s compound at one of its sites for the controversial Trans Mountain pipeline and scaled a tree and then erected a mid-air platform with a hammock up in the air.

Terry Christenson had taken food and water with him and said he had no intention of coming down. His non-violent direct action was in protest of Kinder Morgan’s tree clearing through Burnaby Mountain for the company’s highly contentious pipeline to the BC coast.

It was part of a week of direct action designed to slow construction and clearing that has to be undertaken by the company before March 26, when migratory birds start flying north for the summer.

Terry Christenson outlined why he was taking action: “This pipeline does not have consent of the Indigenous Nations it would pass through. It would endanger the livelihoods and economies of all those that depend on an oil-free coast and I for one won’t stand by and let it happen. I’m taking this action to protect my grandchildren’s future. I care about this land, this coast and I won’t let it be destroyed, all so a Texas oil company can increase its profit share.

“We are all in this fight together,” Christenson added. “We have better options to produce energy and move people around than building another dirty pipeline that the world’s scientific community has said we need to move away from. It’s time that the prime minister got that message and I’ll be doing my best to hang out here until he does.”

He was not the only one arrested. Fifteen more people were arrested by blocking the gates to Kinder Morgan’s compound. This brings the total to about fifty people arrested in the past few days, with opposition against the pipeline growing daily. Yesterday, one of the first to be arrested at the gates was another seventy-year-old, Rex Weyler, who co-founded Greenpeace International in 1979 and is one of the founders of the Hollyhock retreat center in BC.

“Forty-six years ago, Greenpeace got its start right here in Vancouver protecting this coastline, and the world, from the sorts of ecological disasters and social disruption that Kinder Morgan’s pipeline threatens,” he said. “Like then, we stand now for protection of the natural bounty that keeps our communities alive and prosperous.

“We stand here on the land and by the waters of the Tsleil Waututh people, who have shown us generosity and taught us responsibility, in solidarity and prepared to go to jail, to preserve the ecological integrity of this coast for ourselves and future generations.”

Also present were Barbara and Bob Stowe, daughter and son of Greenpeace founders Dorothy and Irving Stowe. “Today, we will stand with Coast Salish Peoples against it. If our parents were alive today, they’d be standing right here with us,” said Barbara.

“If someone comes on to your property and starts drilling without approval, what are you doing to do? We’re going to stop it.”