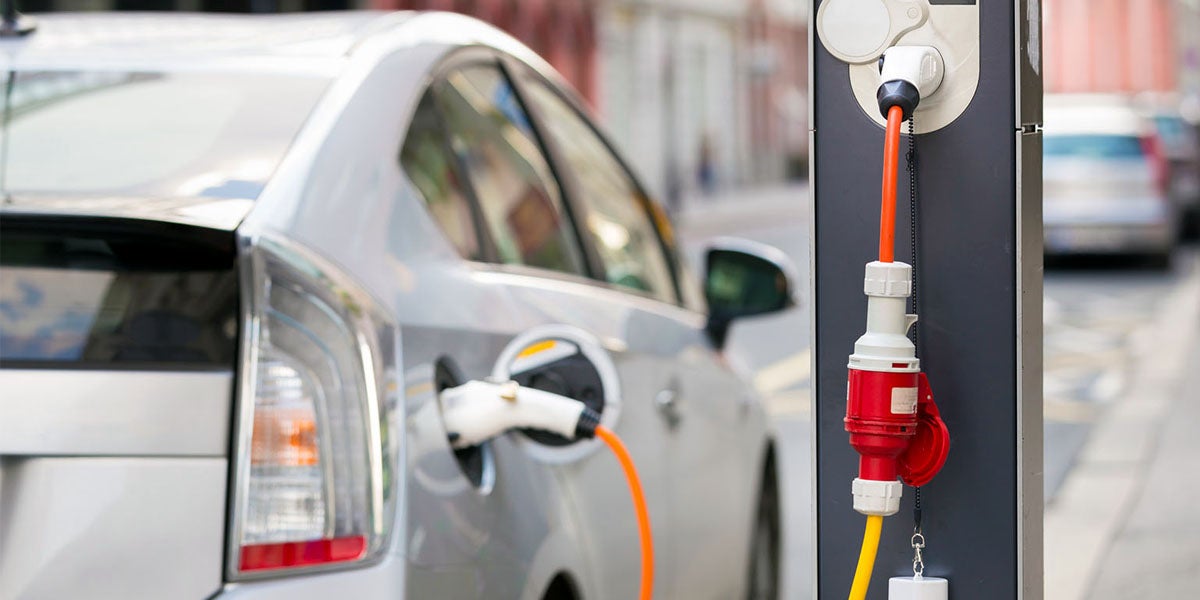 As federal support for electric vehicles (EVs) is expected to wither under the Trump administration, state-level policies will play the biggest political role in how quickly battery powered motors replace the internal combustion engine.

Yet, at this critical moment when state governments should be supporting zero-emission vehicles, many states are cutting their incentives, while others are penalizing EV drivers outright.

In a recent article for the New York Times, Hiroko Tabuchi explores a number of efforts underway in state capitals across the country that are making the transition to electric cars a steeper uphill climb.

1. The canceling of tax credits that support EV sales and leases.

These legislative attacks on EVs bear the fingerprints of Big Oil, which sees the electrification of the transportation sector as the biggest single threat to the oil industry. Groups funded by the likes of ExxonMobil and the Koch brothers are supporting the measures and in some cases, even writing the bills.

Over the past decade, nearly half of all of the states and the District of Columbia have had some kind of financial incentive for EV sales on the books—typically in the form of an income tax credit or a straight-up rebate. But this support is fading, as some states cancel the incentives and others let them expire.

Today, only 16 states (plus the District of Columbia) still offer tax credits or rebates and at least two states are voting in the current legislative session on whether or not to extend or repeal the benefits.

In Utah, a bill that would have extended the state’s EV tax credit (of up to $1,500) through 2021 was just voted down, failing by a single vote. Meanwhile, in Colorado, which had offered the country’s most generous EV incentive, legislators will soon vote on a bill that would cancel the $6,000 tax credit for purchasers of EVs.

“The measure in Colorado has been backed publicly by Americans for Prosperity, an advocacy group founded by the conservative billionaire brothers David H. and Charles G. Koch, whose wealth is founded on their petrochemicals empire.”

The rollback of sales incentives has come at the same time as many states are introducing new fees that directly penalize plug-in owners for their choice to drive zero emission vehicles that charge off the local electric grid.

This year, policymakers in nine states have introduced legislation that would charge a higher rate for EV registrations than for conventional internal combustion vehicles. (Another state, Illinois, is debating a bill that would raise the EV registration rate, which is currently lower, to match gas-powered vehicles).

Kansas and Indiana are both debating a $150 annual fee. Montana started out with a bill featuring a $300 annual fee, but that was negotiated down to $95 per year, which passed their house and has moved into the state senate. New Hampshire, South Carolina, Minnesota, Arizona and even California have some sort of EV fee winding through the legislature.

Proponents of higher EVs fees say that they are necessary to ensure that plug-in cars pay their fair share for the roads. Typically and universally within the U.S., highway funds are raised from revenue from gasoline taxes. Because EV drivers don’t buy gas, they aren’t chipping in for those highway funds.

However, the Sierra Club’s Electric Vehicles Initiative director, Gina Coplon-Newfield, told DeSmog that this argument fails the tests of basic math, saying, “When you look at the financial numbers, they don’t add up at all.”

First of all, Coplon-Newfield noted, “conventional vehicles have become far more efficient” and aren’t consuming as much gasoline and therefore aren’t generating as much revenue for the highway funds. Second, “gas tax charges have not been in sync with inflation.”

Coplon-Newfield gives the example of North Carolina, where the state is hoping to raise millions for their highway fund. If you raised the gas tax by one cent per gallon, the state would raise an extra $7.5 million. Contrast that with the total revenue raised from EV registration fees in 2014: $440,000. Even if the state is registering three times as many EVs today, it’s still millions short of the goal.

There are other reasons that EVs should be given a break on registration fees—they actually cause less road damage given their light weight and improve air quality and benefit public health because they don’t have tailpipes.

For a look at what happens when a state both kills incentives and starts charging EV drivers extra fees, you only have to look to Georgia.

Just three years ago, Georgia was an unlikely national leader in electric vehicle sales, boosted by one of the nation’s most generous state-level EV tax incentives that offered drivers a tax credit of up to $5,000 when buying a plug-in vehicle. By early 2014, Georgia trailed only California in EV registrations. Then, in January 2015, a new measure slipped into the state’s $1 billion transportation bill which killed the credit and added another $200 annual fee for EV drivers.

Overall EV sales dropped by 90 percent and sales of the Nissan LEAF are off nearly 95 percent, according to Don Francis, the coordinator of Clean Cities-Georgia and executive director of the Partnership for Clean Transportation. 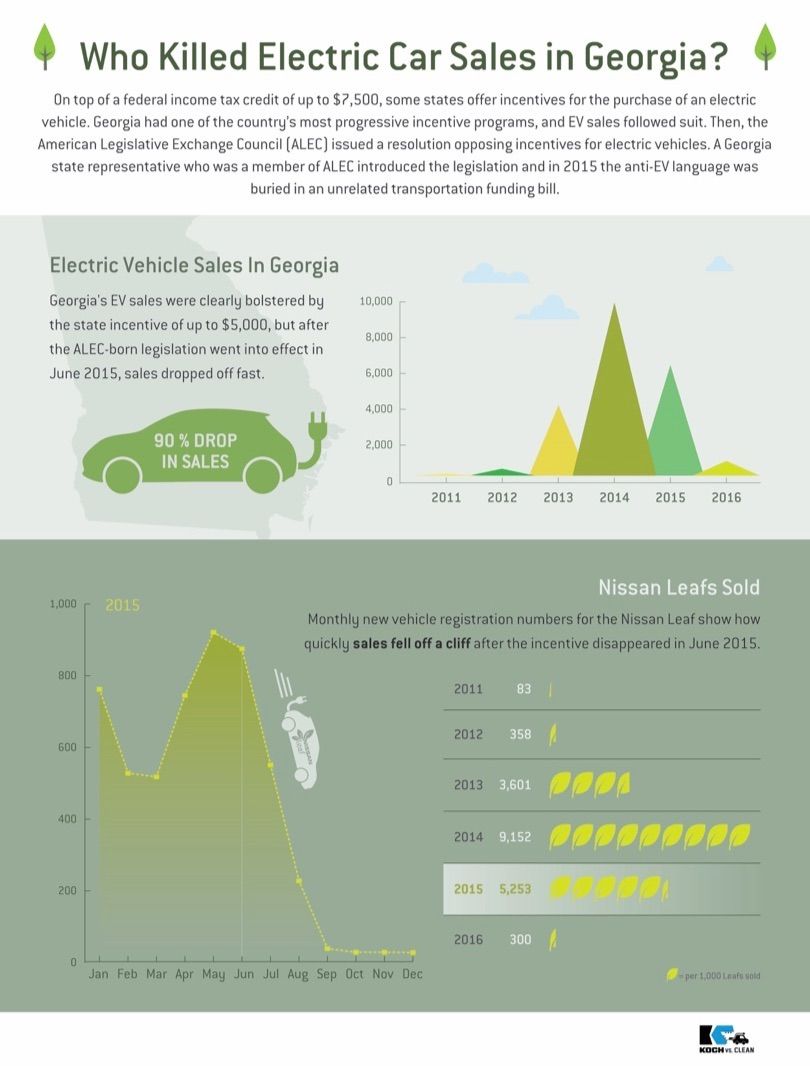 Here’s how Atlanta Magazine described the history of the legislation:

“In January 2015, state Representative Chuck Martin, an Alpharetta Republican, introduced a bill to kill the state credit partly on the argument that it gave electric vehicles an unfair advantage over other low-emission cars such as the Chevrolet Volt. Martin’s measure got lumped into the $1 billion transportation bill, which raised the state’s gas tax to pay for road improvements. As if that weren’t enough, lawmakers slapped electric vehicle owners with an additional $200 annual fee on the logic that it wasn’t fair to make drivers of gas-powered vehicles bear the entire cost of road maintenance. When the new laws went into effect on July 1, the emerging electric vehicle market was immediately eviscerated. Statewide registrations plummeted from 1,338 in June to 115 in October.”

But there’s more to the story. Martin’s bill looks similar to model bills that have been pushed by the American Legislative Exchange Council (ALEC), a Koch-funded entity that pushes fossil fuel–friendly agendas through state legislatures.

As the Center for Media and Democracy has noted, ALEC recently began pushing the Koch’s anti-EV agenda:

“At the American Legislative Exchange Council (ALEC) meeting in Scottsdale, Arizona in December 2015, the Energy, Environment and Agriculture Task Force heard a presentation on ‘State and Federal Subsidies for Electric Vehicles,’ then voted on a resolution to discourage states from providing subsidies, the ‘Resolution Regarding Subsidies for Electric Vehicles.’ The Kochs have long funded ALEC. Koch Industries has had a seat on ALEC’s ‘Private Enterprise’ board for years, while Koch network entities like Freedom Partners, Americans for Prosperity and Koch-funded ‘think tanks’ have seats on a number of task forces where they get a vote on bills.”

Meanwhile, also in 2015, Georgia started charging EV drivers extra registration fees. The extra $200 per year to register the vehicle probably doesn’t have the impact of losing the $5,000 tax credit. But it sure doesn’t help.

As evidenced in the registration numbers pictured in the chart above, Georgia is no longer a national leader in electric car sales. In Georgia and nationwide, the transition to electric cars seems inevitable. It just might take a decade or two longer if left to market forces alone. In terms of public health and the climate, those years shouldn’t be wasted.

As Coplon-Newfield put it, “Now is the time to be incentivizing, not penalizing, electric vehicles.”