Kids as Young as Two Addicted to Smoking Cigarettes in Indonesia 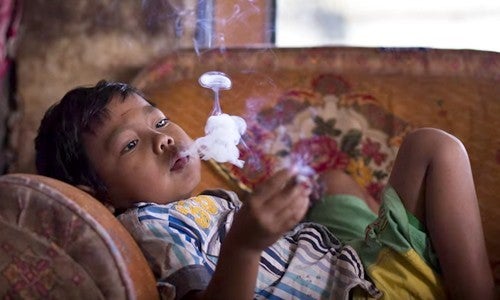 Thanks to public awareness campaigns about the dangerous health impacts of smoking cigarettes and the resulting heavy regulation of the tobacco industry, smoking rates in the U.S. are at their lowest level since records began in 1965. Still, “cigarette smoking is the leading cause of preventable disease and death in the U.S.,” says the Center for Disease Control and Prevention, “accounting for more than 480,000 deaths every year, or one of every five deaths.”

However, overall tobacco use in the U.S. is on the decline. The same cannot be said worldwide. Take Indonesia, for instance, where 60 percent of men smoke and some take up the habit as early as two years of age. The problem gained a lot of media attention in the U.S. five years ago, when a video of a two year old puffing on a cigarette as his parents looked on went viral. He was smoking up to 40 cigarettes a day, but has since gone to rehab and no longer smokes. Unfortunately, that wasn’t just an isolated incident.

Michelle Siu, a Canadian documentary photographer and freelance photo journalist, began a photo series to highlight the impacts of Indonesia’s unregulated tobacco industry (worth $100 billion) on the country’s children. She photographed children ages four to 18 who have become addicted to cigarettes.