'Kick Big Polluters Out' of COP21 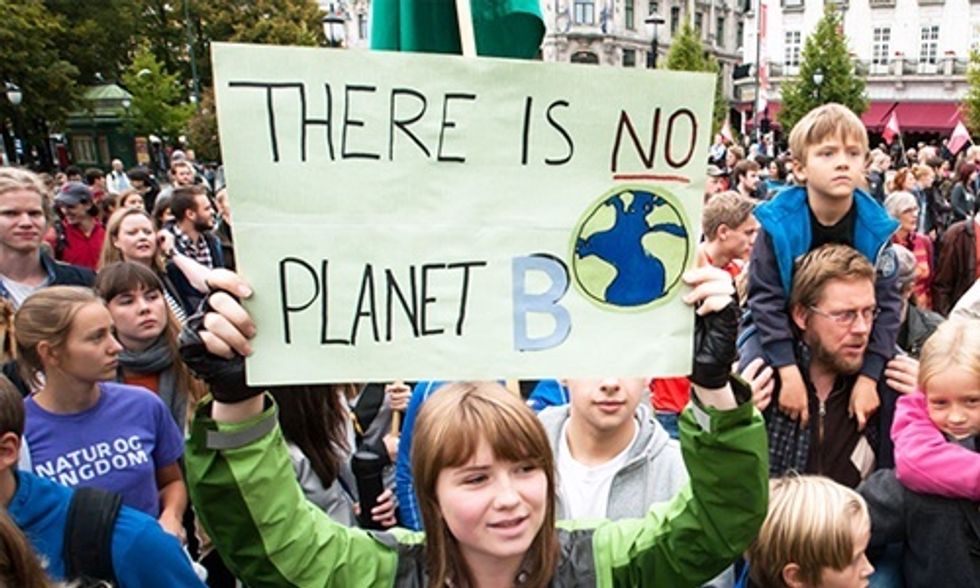 On the heels of new findings that corporate influence is undermining climate policy progress globally and a U.S.congressional call for an investigation into ExxonMobil, civil society is mounting a historic campaign to jettison polluters from climate policymaking.

Kick Big Polluters Out is being launched from Bonn during the final week of negotiations of the United Nations Framework Convention on Climate Change. Photo credit: Kickbigpollutersout.org

The campaign and new global platform, called Kick Big Polluters Out, is being launched from Bonn during the final week of negotiations of the United Nations Framework Convention on Climate Change (UNFCCC) before the highly anticipated meetings in Paris. The launch comes just days after global actions from Kenya to Colombia, Uganda to Sri Lanka, as advocates urged delegations to stand firm against industry interference, which has increased recently in the face of accelerating global action.

“Around the globe people are calling for action now. We don’t have time to waste; governments must act now,” said Jesse Bragg of Corporate Accountability International. “There are too many lives at risk today to leave tomorrow up to the climate offenders that are driving the problem.”

The movement was bolstered Friday with the release of a report from InfluenceMap that exposes Big Oil’s true intentions in climate policy. The report, the first of its kind to compare Big Oil’s PR to the often contradictory lobbying and advocacy done on its behalf by its many front groups, confirmed what many have known for some time: Big Oil has no intentions to walk the talk on climate change.

From direct sponsorship and cooptation of UNFCCC talks to external advisory commissions and initiatives, fossil fuel industry interference in policymaking is an obstacle at every level.  On Friday, the Oil and Gas Climate Initiative—an alliance between some of the world’s largest oil and gas producers—released a  pro-oil report advocating for industry friendly “market-based” solutions.  And, just weeks ago Shell and BHP Billiton announced a partnership with McKinsey Consulting to “advise” governments on climate policy. Both efforts have already been met with skepticism from environmental groups and the media alike.

Inside the UNFCCC, big polluters like the fossil fuel industry and energy utilities have successfully institutionalized their influence of the process. In May, it was revealed that the next Conference of the Parties (COP 21) would be yet another “Corporate COP” with the announcement of a host of corporate sponsors, including Engie, Électricité de France (EDF) and Suez Environnement. Suez Environnement, infamous for its dealings in water privatization, is partially owned by Engie, which profits from fracking operations around the world, putting it at direct odds with the advancement of the treaty. EDF and Engie’s current coal operations account for the equivalent of nearly half of France’s entire emissions.

Currently, industry involvement in the policymaking process is not only allowed, it’s encouraged, regardless of a corporation’s environmental track record. The Lima-Paris Action Agenda, a joint project of the incoming and outgoing COP presidents, the Office of the Secretary-General of the United Nations and the UNFCCC Secretariat, encourages direct engagement with non-state actors—primarily identified as sub-national governments and corporations—as stakeholders in the policymaking process. To date, the Lima-Paris Action Agenda involves more than 1,100 corporations including major fossil fuel corporations, transportation corporations and energy utilities. Such an initiative not only allows some of the world’s biggest polluters to greenwash their image, it gives them access and leverage in the treaty process.

These tactics—cooptation, appropriation and PR posturing—are the same used by Big Tobacco to position itself on the side of health and stave off tobacco control action. The Kick Big Polluters Out campaign is rooted in the movement to rein in the tobacco industry during the development of the World Health Organization’s Framework Convention on Tobacco Control, which came into force in 2005, contains a legally binding provision to mitigate the conflicts of interest the tobacco industry poses in the development and enforcement of public health and tobacco control policy.

Today’s official global platform launch in the run-up to Paris builds on the more than 350,000 people who have already called on their governments to take action. On Thursday, groups will hold an event in Bonn to discuss in detail the impact corporate interference is having on the outcomes of national and international climate policy.