Keystone XL Vote Planned for Friday in the House 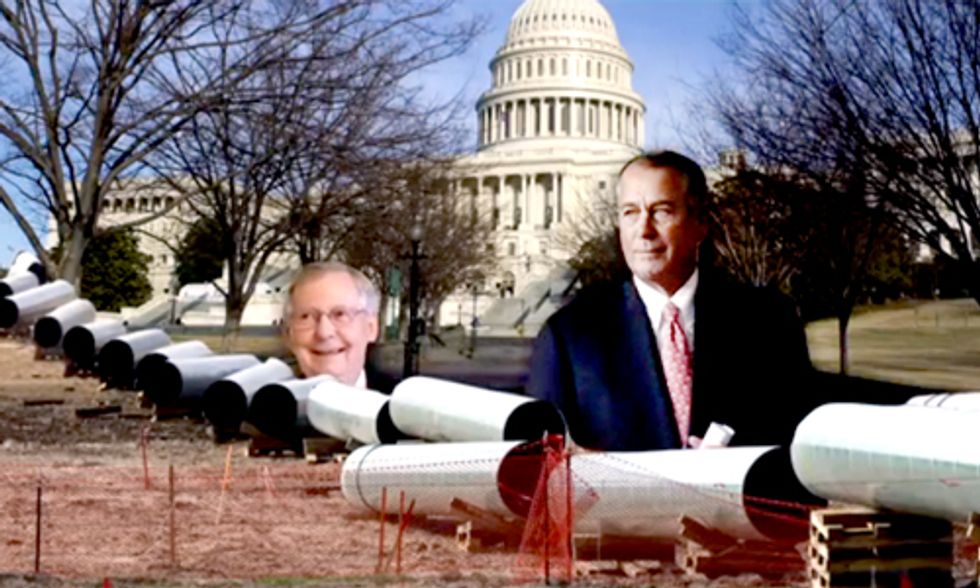 With Congress back in session, Republican leadership is putting at the top of its agenda an item that probably isn't at the top of most Americans' agenda: approving the Keystone XL pipeline.

Majority leader Kevin McCarthy said that the House of Representatives will vote on Keystone XL pipeline Friday, according to the Wall Street Journal. The House has voted ten previous times to approve the pipeline but each time, it failed to clear the Democratic-controlled Senate. Now, with Republicans in charge of the Senate and a larger Republican majority in the House, its passage is guaranteed. The last House vote was 252-16, and it's sure to garner an even larger margin this time.

The Senate is scheduled to begin consideration of the pipeline bill tomorrow with hearings in the Energy and Natural Resource Committee, headed by Lisa Murkowski of Alaska, a supporter of the project. Senate Democrats are pushing for an open process that would allow them to offer amendments, and incoming Senate Majority leader Mitch McConnell has said that will happen. That means a full vote on the Senate floor could be weeks away.

"Just about the only people who think the first thing Congress should do is force approval of Keystone XL are those working for oil and gas billionaires—which explains exactly why Congressional Republicans want to do it," said Sierra Club’s legislative director Melinda Pierce. "For those in Congress who don’t share those pro-polluter goals, this first vote will be a chance to stand together and send the message to the public that we won’t go backwards. After all, Americans didn’t vote for dirty air, dirty water or dirty energy, even if Congress is committed to doing just that."

On Sunday, Democratic senators Chuck Schumer of New York and Debbie Stabenow of Michigan sent a letter to their Democratic colleagues urging a package of amendments that they said "can be tied together by a common theme—that we are working hard to make the average American family better off while Republicans are helping narrow special interests."

The amendments include banning the export of oil shipped through the Keystone pipeline, guaranteeing that the pipeline would bring down U.S. oil prices, requiring use of domestically produced iron, steel and parts in the pipeline's construction and mandating that for each job created by the pipeline, one or more are created through clean energy projects. They would also prohibit foreign companies from being able to use eminent domain on U.S. soil. Keystone XL is a project of Canada-based TransCanada, intended to ship Alberts tar sands oil to ports on the Gulf of Mexico for refining and export.

"Many Republicans have raised serious objections to the use of eminent domain by local American governments, and unless they believe the authority is less troubling when exercised by a foreign company they should vote for this amendment," they wrote.

Schumer said on Face the Nation that while the amendments might make the bill better, he still thinks that President Obama should veto it and that Republicans don't have the 67 votes to override his veto.

“These amendments will make it better but certainly not good enough at this point in time—and I think there will be enough Democratic votes to sustain the president’s veto,” said Schumer.

McCarthy, on the other hand, said he believes the President will sign off on approving Keystone XL, despite Obama's repeated suggestions that he would not do so prior to issues such as the pending eminent domain court case in Nebraska being settled.

But the President still isn't making it clear what he will do. Yesterday the President's press secretary Josh Earnest told reporters, "I'm not prepared at this point to issue a veto threat related to that specific piece of legislation."

Pipeline believers are continuing to push the idea that it's a panacea for American competitiveness. Mark R. Maddox of rightwing policy group the American Action Forum wrote in The Hill today that the pipeline is essential for American competitiveness and energy independence, referring to opponents as "misguided" and "ruthless" and saying they "are degrading U.S. competitiveness, increasing the likelihood of future oil price shocks through reliance on politically unstable oil producing countries and undermining 40 years of strategic work to achieve energy security."

But talk show host Ed Schultz, who was a believer in the pipeline, spent a year investigating the issue and came around to thinking it's of no benefit. This week he excoriated the drumbeat among congressional Republicans that the bill is about "jobs and the economy" despite the admission of TransCanada's own CEO that it would create at most 50 permanent jobs and the refusal of Republicans to consider a real jobs bill. In a segment last night, he summed up the arguments against the pipeline, ranging from the false job claims to the impact on the environment.

"The misinformation continues to roll out there," said Schultz. "Republicans won't give up on these bogus talking points on this project."