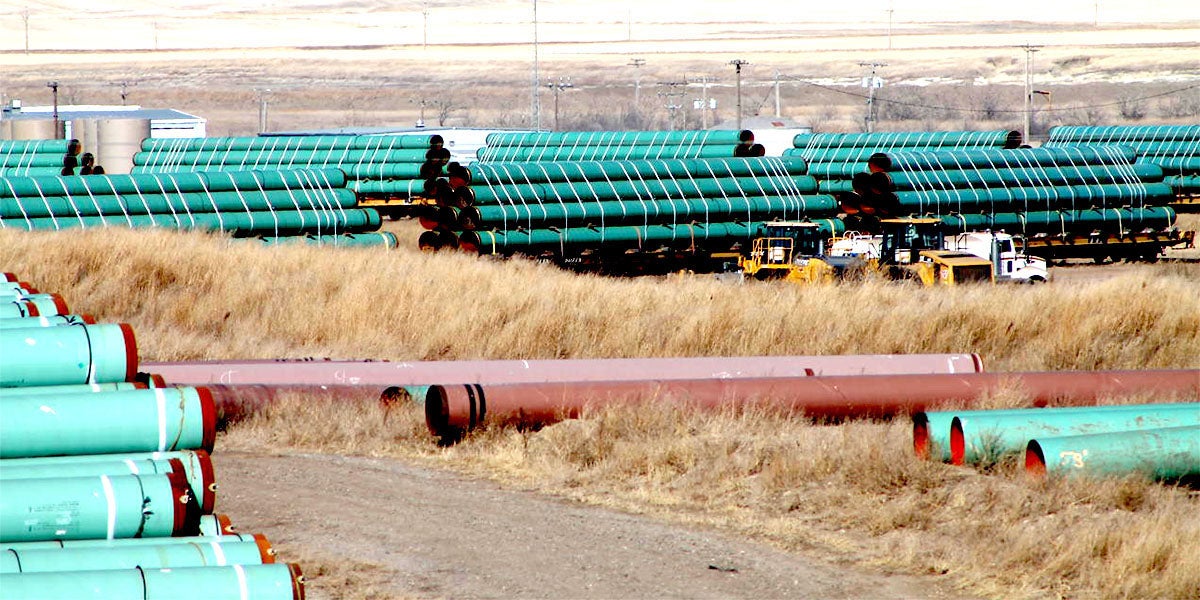 When he turned the proposed Keystone XL tar sands pipeline from dead and gone into a reawakened zombie, President Trump claimed that his doing so would mean new construction jobs, steel manufacturing jobs and money for the U.S.

Before he was elected, he used the pipeline to show how he was going to enrich America, promising that we’d get 25 percent of TransCanada’s profits. All in all, the basic message continues to be: This is a great deal for America. But what, actually, is the “deal?”

The short answer is: What deal?

The real deal here is a bad one. Just like the last time around, Keystone XL is not in our national interest. It would lock in decades of increased climate pollution driven by expanded tar sands production in Alberta. It would threaten our waterways and drinking water sources with the toxic legacy of a spill that can’t be fully cleaned up. And it would serve Gulf Coast refineries who are exporting growing volumes of both refined products and crude oil to international markets. In other words, this is a pipeline that creates major environmental risks all to carry tar sands oil that America doesn’t need and wouldn’t use.

And what TransCanada has offered in “round three” doesn’t improve on anything they’ve offered before, despite President Trump’s bluster. Here’s the rundown:

The Bakken on-ramp was added to the Keystone XL proposal in 2012 after outcry from U.S. oil producers forced TransCanada to add a “feeder” pipeline that could bring up to 100,000 barrels per day (bpd) of U.S. oil into the Keystone XL pipeline system in Montana. The Bakken Market Link addition allowed Keystone XL’s advocates to build support for the project from the U.S. oil industry. Now, it looks like they’re doing what they can to make that gift to U.S. producers disappear.

In 2012, TransCanada wrote in its application:

“The related Bakken Market Link Project will include the construction of ‘on-ramp’ facilities in Fallon County, Montana to allow Bakken crude oil to access the pipeline system for delivery to Steele City and then to the Gulf Coast.”

Note the use of the word “will” in that sentence. This on-ramp pipeline was part of the plan, as in, they were going to build it and Bakken producers were the planned beneficiaries from the added pipeline capacity. But in 2017, their application says:

“Subject to commercial demand, the related Bakken Market Link Project would include the construction of ‘on-ramp’ facilities in Fallon County, Montana to allow Bakken crude oil to access the pipeline system for delivery to Steele City and then to the Gulf Coast.”

But the market case for pipelines in North Dakota and Montana has deteriorated since Keystone XL was proposed in 2008—the region now has more pipeline capacity than production and more is on its way. According to the North Dakota Pipeline Authority, more than one million bpd of new pipeline capacity has been built since Keystone XL was first proposed, with more expected. Meanwhile, low oil prices have blunted once projected increases in Bakken oil production.

TransCanada’s injection of uncertainty into their new Keystone XL application allows them to avoid a commitment they were previously willing to make. And it’s likely they’ll do so—as they may have a difficult time finding U.S. producers interested in signing long-term shipping contracts on Keystone XL without an easy way of getting their oil into the pipeline. In 2014, the key proponent of the Bakken on-ramp, Harold Hamm, said of Keystone XL, “It’s not critical any longer… They just waited too long. The industry is very innovative and it finds other ways of doing it and other routes.” If U.S. producers already admitted Keystone XL wasn’t useful in 2014, you can bet it’s even less useful to them now.

In the meantime, their new application is mum on President Trump’s repeated demand that new pipelines be built from U.S. steel, his promise that the U.S. is going to get a big share of profits or his promise of tens of thousands of new construction jobs.

Then there’s the strangely weak case TransCanada has submitted for why Keystone XL is in America’s national interest. Last time around, TransCanada provided significant detail about the ways in which the pipeline fulfilled the State Department’s criteria for making National Interest Determinations.

This time around, they’ve boiled their case down from 29 pages to seven bullet points. In sum, these points basically say that Keystone XL gives the U.S. access to more Canadian oil and allows Canada to get its oil to U.S. refineries more cheaply. What they don’t mention is that these refineries—and the Gulf Coast region in general—are exporting more and more refined products and crude oil as U.S. demand weakens.

The same job and financial benefits that were highlighted the last time around are there and then there’s the sweeping statement that approving Keystone XL will send a signal that large infrastructure projects can happen in America. These bullets obfuscate a few critical factors:

1. Keystone XL is, in part, about increasing the profits of Canadian tar sands producers (TransCanada talked a lot about this in 2012, but has since deleted that section).

2. Oil demand in the U.S. is slowing, meaning the long-term access to new oil reserves promised by TransCanada is a red herring—a majority of the oil processed by the refineries potentially served by Keystone XL is currently exported and that trend is growing (TransCanada is also mum on this topic in 2017, even though they acknowledged this reality in 2012).

As recently as his speech before Congress on Feb. 28 and his speech to the Conservative Political Action Conference on Feb. 24, President Trump has continued to claim that the Keystone XL pipeline, if approved, will be built from U.S. steel. This promise is empty for many reasons, the biggest being that TransCanada has already purchased most of the steel pipe it would use to build Keystone XL.

What’s more, only 50 percent of that steel was produced in the U.S., meaning his promise would require TransCanada to re-purchase hundreds of miles of new pipe. This would dramatically increase the cost of the project, which in 2014 stood at $8 billion (and is likely higher today, given five years of inflation since TransCanada last figured its costs).

Then there’s the jobs claim. President Trump can’t seem to keep his numbers straight on this one, but we’ll give him a pass on that fact this time around. When he signed the memo bringing Keystone XL back from the dead, he claimed 28,000 jobs. At the Conservative Political Action Conference he claimed 42,000. They’re both big numbers that obscure the underlying facts. In terms of full time employment, the numbers are actually:

These are well established numbers and have been for years. To be generous, you could claim a higher number—the State Department found 10,400 seasonal jobs—but each of those jobs would last four to eight months and then end. While there’s no question that there are benefits to these short-term positions, if President Trump’s job creation promises amount to short-term contracts spread across multiple states over two or more years, the benefits to local workers may be minimal indeed.

The last time I posted on this subject, I concluded with this thought: everything that was wrong with Keystone XL when it was proposed in the past is still wrong today. It’s an environmental disaster waiting to happen, a climate-wrecking project with no place in today’s energy mix and it’s not in America’s national interest. There are easier, less contentious and less expensive ways to create jobs—jobs that will outlast the inevitable decline of our dependence on fossil fuels and the boom and bust cycle of the environmentally destructive oil industry.

That sounds about right. A “better deal” in terms of what President Trump has laid out would kill Keystone XL. And Americans are starting to catch on to the fact that the pipeline, no matter how you slice it, just isn’t a project in our country’s interest: Polls now show that a majority of Americans—up to 51 vs. 38 percent in some polls—don’t think the pipeline should be built. The raw deal TransCanada has offered up yet again isn’t a salve for any of the challenges facing America’s future energy needs, the need for stable employment in rural areas or the very real environmental impacts caused by global climate change.

Joshua Axelrod is a policy analyst for the Natural Resources Defense Council.