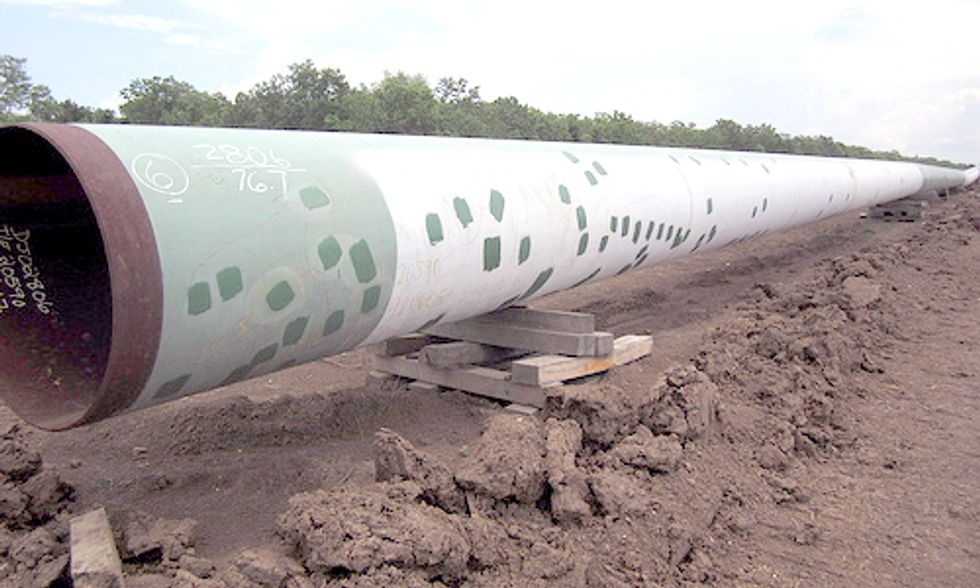 Keystone XL's southern half is one step closer to opening for business. TransCanada announced that "on Saturday, Dec. 7, 2013, the company began to inject oil into the Gulf Coast Project pipeline as it moves closer to the start of commercial service."

The line fill comes weeks after an investigation revealing potentially dangerous anomalies such as dents, faulty welding and exterior damage that could lead to pipeline ruptures, tears and spills. Photo credit: Public Citizen

The Sierra Club's legal challenge to stop the pipeline was recently denied by the U.S. Court of Appeals for the Tenth Circuit, so the southern half, battled over for years between the industry and environmentalists, will soon become a reality.

According to a statement provided to DeSmogBlog by TransCanada, "Over the coming weeks, TransCanada will inject about three million of [sic] barrels of oil into the system, beginning in Cushing, Oklahoma and moving down to the company’s facilities in the Houston refining area."

In mid-January, up to 700,000 barrels per day of Alberta's tar sands diluted bitumen (dilbit) could begin flowing through the 485-mile southern half of TransCanada's pipeline, known as the Gulf Coast Project. Running from Cushing, OK, to Port Arthur, TX, the southern half of the pipeline was approved by both a U.S. Army Corps of Engineers Nationwide Permit 12 and an Executive Order from President Obama in March 2012.

Bloomberg, The Canadian Press and The Oklahoman each reported that the Gulf Coast Project pipeline is now being injected with oil. Line fill is the last key step before a pipeline can begin operations.

"There are many moving parts to this process—completion of construction, testing, regulatory approvals, line fill and then the transition to operations," TransCanada spokesman Shawn Howard told DeSmogBlog. "Line fill has to take place first, then once final testing and certifications are completed, the line can then go into commercial service."

Pinholes in the applied coating can lead to exposing underlying pipe damage to leakage and spills. Photo credit: Public Citizen

Residents living along the length of the southern half will have no clue about the rest of the start-up process, as TransCanada says it won't provide any more information until the line is already running. "For commercial and contractual reasons, the next update we will provide will be after the line has gone into commercial service," the company announced.

When DeSmogBlog asked whether the company is currently injecting conventional oil or diluted bitumen sourced from the Canadian tar sands, TransCanada's Howard replied:

Many people like to try and categorize the blend, etc., however we are injecting oil into the pipeline. As you’ve likely seen me quoted before, oil is oil and this pipeline is designed to handle both light and heavy blends of oil, in accordance with all U.S. regulatory standards.

I am not able to provide you the specific blend or breakdown as we are not permitted (by our customers) from disclosing that information to the media. There are very strict confidentiality clauses in the commercial contracts we enter into with our customers, and that precludes us from providing that. The reason is that if we are providing information about a specific blend, when it is in our system, etc.—that has the potential to identify who our customers may be or allow others to take financial positions in the market and profit from that information when others do not have access to the same information. This has much farther reaching impacts for the financial markets (and ultimately all of us).

"[Public Citizen] and its citizen sources uncovered over 125 anomalies in that half of the line alone," DeSmogBlog reported on Nov. 12. "These findings moved Public Citizen to conclude the southern half of the pipeline shouldn't begin service until the anomalies are taken care of, and ponders if the issues can ever be resolved sufficiently."

In mid-January, up to 700,000 barrels per day of Alberta's tar sands could begin flowing through the 485-mile southern half of TransCanada's pipeline. Photo credit: Public Citizen

Public Citizen's report also pointed out that the original TransCanada Keystone tar sands pipeline has had a dozen spills already, a fact that makes a lot of pipeline critics anxious about KXL.

“The government should investigate, and shouldn’t let crude flow until that is done,” Tom Smith, Director of Public Citizen’s Texas office said in a press statement accompanying the report. "Given the stakes—the potential for a catastrophic spill of hazardous crude along a pipeline that traverses hundreds of streams and rivers and comes within a few miles of some towns and cities—it would be irresponsible to allow the pipeline to start operating."

"TransCanada’s history with pipeline problems speaks for itself and I fear we could be looking at another pipeline whose integrity may be in question."

Despite this precedent of spills, Keystone XL's southern half is about to become a reality, with the fate of the border-crossing northern half of Keystone XL still resting in the hands of President Obama and Secretary of State John Kerry.