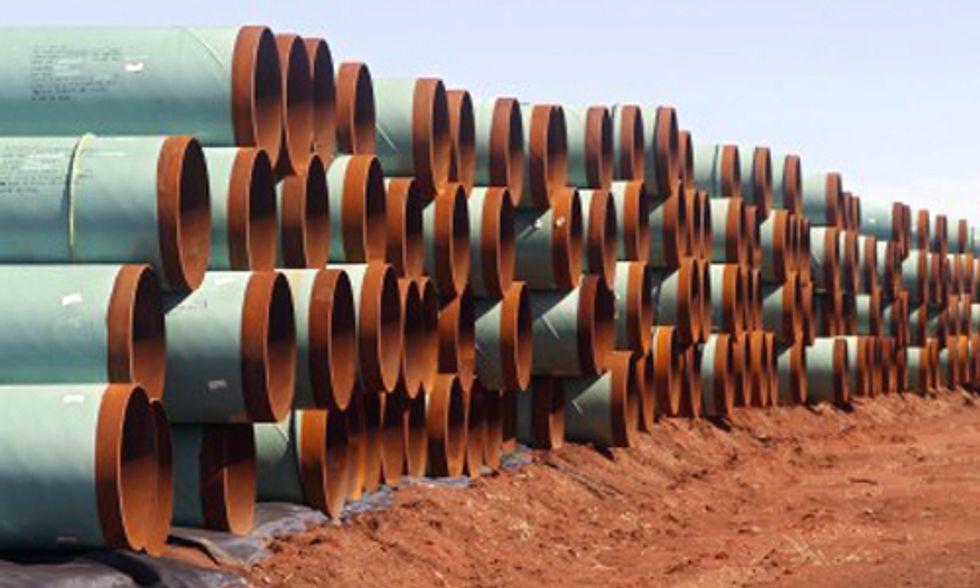 The London-based Carbon Disclosure Project (CDP), which serves as a vehicle for businesses to report their greenhouse gas emissions, has issued its first-ever Climate Performance Leadership Index, revealing its "A List" of corporate citizens who are doing the most to respond to climate change.

“It’s fascinating to learn that TransCanada’s relentless push to foul our land, water and climate has earned them the title of ‘world leader’ on climate, and that they actually have a vice-president dedicated to ‘community and sustainability,’" said Bold Nebraska activist Jane Kleeb.

Our experience working with more than 4,500 companies shows the multitude of benefits for companies that report their environmental impacts, unveiling risks and previously unseen opportunities," writes CDP CEO Paul Simpson in the report's introduction. "We are standing at a juncture in history. With the prospect of a global climate deal coming from the United Nations process, governments, cities, the private sector and civil society have a great opportunity to take bold actions and build momentum in the run up to the Paris 2015 meeting."

One of the bold actions taken by CDP is to name TransCanada—the company behind the Keystone XL pipeline—a "global climate performance leader." While TransCanada has investments in solar, wind and hydro power, it's best known for the unfavorable attention its attracted over the past six years for its proposal to build the Keystone XL pipeline to ship tar sands oil from Alberta to the Gulf of Mexico. With delays in the Keystone XL, due to environmental and community opposition, TransCanada recently shifted its attention to building the even larger Energy East pipeline across continental Canada to ports in Quebec and New Brunswick.

Yet the report says, “TransCanada is building a competitive advantage over competitors by focusing on investing in low-carbon infrastructure that has and may continue to be a core element of our continued capital program.”

Needless to say, Keystone XL opponents don't look at TransCanada as a paragon of "low-carbon infrastructure." Bold Nebraska, which has worked to prevent the pipeline from crossing that state, expressed disbelief in a statement titled, TransCanada Rewarded for Reckless Development With Bizarre Climate Award.

"In a press release that reads like satire, TransCanada announced yesterday that they’ve been 'recognized as world leader for corporate action on climate change,' apparently as a reward for fighting tooth and nail to build the Keystone XL tar sands pipeline and recklessly expand development of the dirtiest, most carbon-heavy fuel source on the planet with no regard for the impact on the climate or the land and water along risky pipeline routes," Bold Nebraska's statement said.

“It’s fascinating to learn that TransCanada’s relentless push to foul our land, water and climate has earned them the title of ‘world leader’ on climate, and that they actually have a vice-president dedicated to ‘community and sustainability,’" said Bold Nebraska activist Jane Kleeb. "I’m very curious to know where that person was when TransCanada was threatening landowners with seizure of their land through eminent domain the first day they rode into town or when they were asking landowners to pray with a fake preacher before offering them a fraction of what their land was worth. I wonder where they were when inspectors found hundreds of dangerous defects in Keystone’s southern leg. Were they being ‘world leaders’ on climate and the environment then?”

“The only thing TransCanada is a leader in is exploiting the world’s dirtiest oil,” added Luísa Abbott Galvão of Friends of the Earth.

The Sierra Club was also not impressed.

“Tar sands are the dirtiest, most carbon intensive oil on earth, releasing up to 22 percent more carbon pollution than conventional oil," said Kate Colarulli of Sierra Club's Beyond Oil campaign. "TransCanada, as a company that seeks to expand market access for this climate-polluting fuel, is a climate laggard. The State Department, the U.S. EPA, climate scientists and even Wall Street and industry analysts agree that TransCanada’s Keystone XL tar sands pipeline will create massive amounts of carbon pollution and TransCanada’s new proposed pipeline, Energy East, is a climate disaster. Rejecting TransCanada’s tar sands pipelines are some of the most important decisions we can make to protect our kids from a future filled with wildfires, droughts, floods and super storms caused by climate change.”