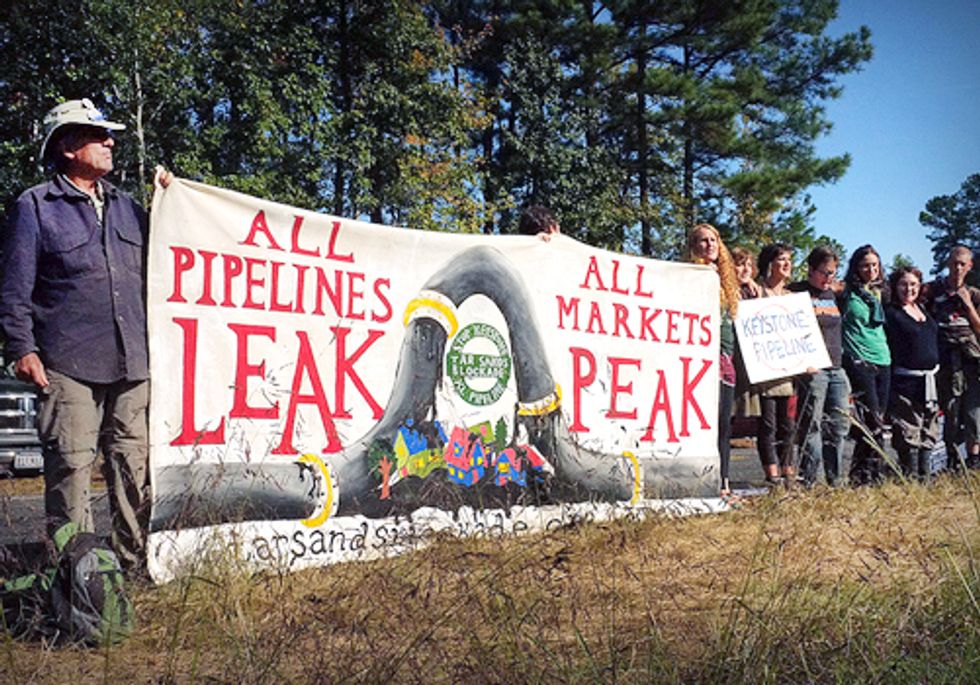 More than 50 blockaders on Monday tried to enter the site where activists have been holding a historic standoff to stop the Keystone XL pipeline, to expand and support the ongoing Tar Sands Blockade tree village in east Texas.

Several managed to break through police lines to attempt to re-supply activists who have been occupying trees in the pathway of the Keystone XL pipeline since Sept. 24. The rest of the blockaders rallied nearby, blocked by police and TransCanada's hired security, who had formed a human barrier around the pipeline easement.

Two blockaders locked themselves to construction equipment. By the end of the day ten blockaders were arrested. Six of the blockaders have been released on $1,500 bail and charged with trespassing. The two blockaders who locked down are expected to see a judge today.

One 70-year-old Cherokee woman was tackled by local security hired by TransCanada.

The activists were gathered at the location in Winnsboro, Texas, after spending the weekend at a direct-action camp hosted by Tar Sands Blockade. Activists traveled from across the country and were trained in climbing, media relations, organizing and body blockade techniques.

"Coming out here had been one of the more inspiring things that I have done in years now," says Toby Potter, an Earth First!er.

Potter helped lead workshops over the weekend for camp participants in lockdowns and body blockades. "It gives me a lot of hope, seeing all this resistance from the area ... and from around the country, and knowing that there's [sic] other fights against tar sands at the same time."

Potter helped camp participants erect a 30-foot wooden tripod used by activists who sit at the top of it during a blockade action. Many of the weekend's campers participated in Monday's blockade in Winnsboro to defend the tree village.

Most of the defendants have been arrested in previous Tar Sands Blockade actions. Ron Seifert, the blockade's media spokesman, was also named, although he has not yet been arrested in connection with the ongoing protest. Actor Daryl Hannah, who was arrested while defending Area Landowner Eleanor Fairchild's home, is not named in the SLAPP suit. Fairchild, however, is named in the suit.

Another activist, going by the name Kevin Redding due to security concerns, recently escaped arrest at a secondary tree-sit the Blockade launched last week at West End Nature Preserve outside Mt. Vernon, Texas, where TransCanada had announced plans to cut trees.

"I've lived in Texas my whole life, and when I heard about TransCanada putting the pipeline through, I didn't like the idea of any part of Texas having a tar sands pipeline going through it," Redding told Truthout. "I've been here for a long time, and I don't plan on going anywhere."

Redding said local police tried to intimidate him, as he sat in a tree, with threats that he would be charged with terrorism. When company representatives said they would under-bore through the preserve, rather than cut trees in the ecologically sensitive area, the activist left the site, unobserved.

Monday's action comes on the heels of an ongoing police crackdown not only on the tree-sitters, but also on journalists trying to tell their story. Two New York Times reporters were detained Oct. 10 while covering the tree-sit. They were released after identifying themselves as media.

Two independent live streamers, Elizabeth Arce and Lorenzo Serna, embedded on a timber wall, were arrested while covering the blockade in Winnsboro. Another videographer (full disclosure, my partner) was arrested while filming a lockdown action at a pipe yard in Livingston, Texas.

Serna was detained while livestreaming during Monday's action.

"Right now, in the blockade, the press can't go onto the wall. They can't talk to those people, so there has to be someone willing to take that risk on," Serna says.

Arce and Serna remained on the wall for nearly a week until they were forced to come down. Trespassing charges against the two livestreamers have been dropped. Currently members of the media cannot approach within 60 feet of the pipeline easement at the site of the tree-sit.

"I think we've done a good job building a reputation for respecting people's desires to be filmed or not to be filmed, and building a culture of consent when filming," Arce says. "We really care about the people, and are not afraid to connect to it in an emotional way and care about the story."

According to TransCanada, the live streamers are not real journalists, but activists claiming to be journalists in order to demonstrate.

The New York Times reporter, Dan Frosch, did not mention the fact that he was detained in his coverage of the ongoing tree-sit.