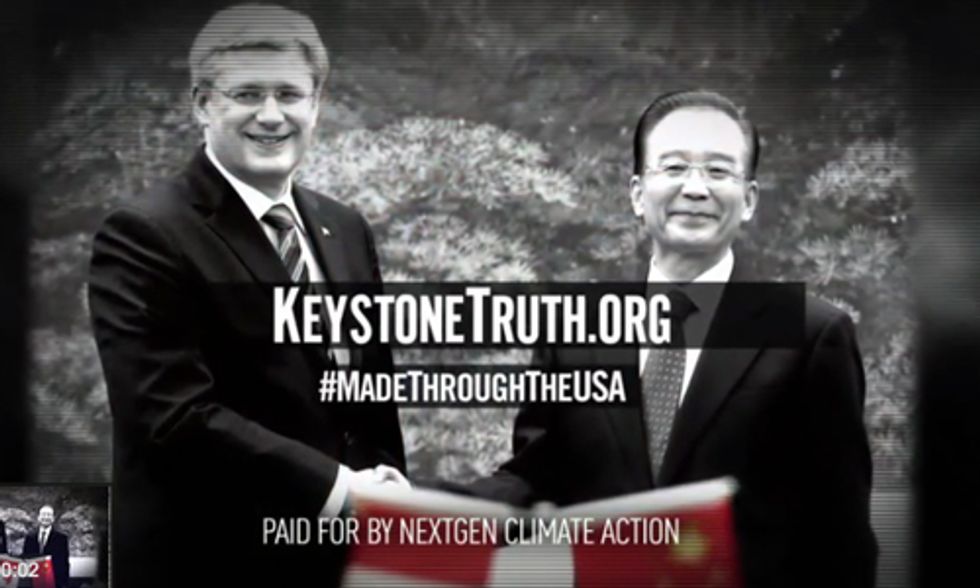 For years, TransCanada has been selling the Keystone XL pipeline to Americans with all of the enthusiasm of a used car salesman—and using all of the same tricks. However, one myth is more egregious than all the rest: this pipeline will enhance America's energy independence.

Apparently, Big Oil lobbyists and politicians take Americans for a bunch of suckers.

Here's the truth: Keystone XL won't make America energy independent. It will threaten our land and livelihoods to pump Canadian tar sands' heavy crude through America and out to foreign countries, like China.

So who will benefit from Keystone XL? Companies backed by the Chinese government have recently become some of the biggest players in Canadian tar sands development, investing nearly $30 billion over the past few years. China now holds 100 percent of Nexen, a tar sands and shale gas company, and also has major stakes in McKay River, Dover, Long Lake and other Canadian tar sands projects. And the Keystone XL pipeline would give them easier access to Canada's energy resources, providing more power for China's economy and more carbon pollution for the world.

And what do the American people get out of the deal? Higher gas prices in the Midwest and only 35 permanent jobs. Not to mention the risks to our farms, towns and drinking water.

There has been too little focus on the real winners of the Keystone XL pipeline: foreign countries like China. That's why we engaged our online community to run a national television ad, “Suckers," during President Obama's State of the Union address.

We need to ask elected officials supporting Keystone XL whether they're willing to put their constituents and our environment at risk so that foreign oil tycoons get a better return on their tar sands investments. Keystone XL backers will keep trying to sell us a sucker's deal; it's up to us to say no.