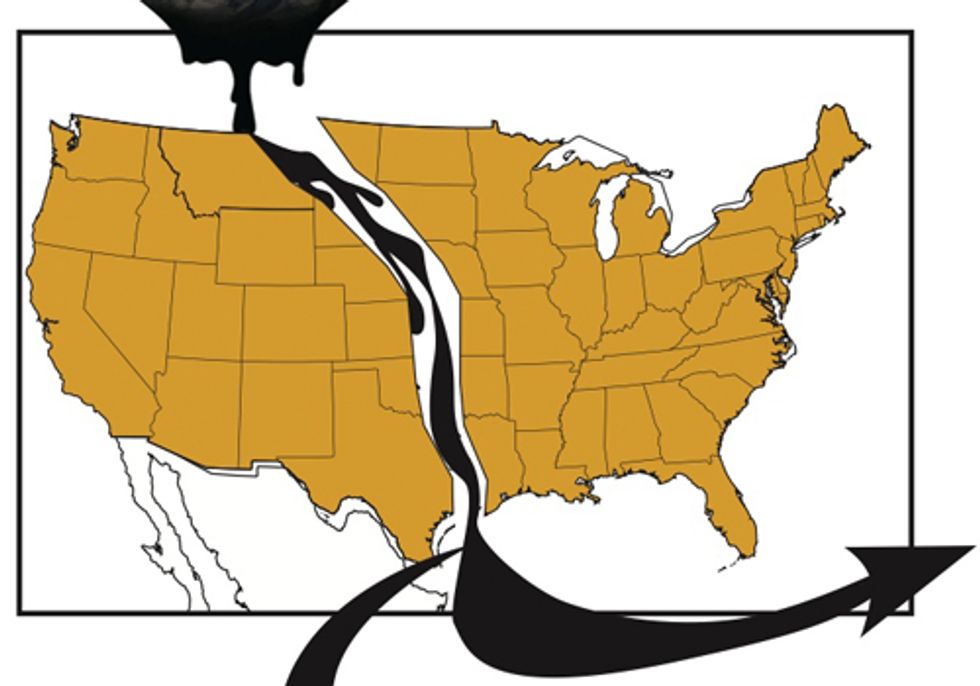 [Editor's note: The U.S. State Department could release as early as today a long-awaited draft environmental assessment of the Keystone XL pipeline. Stay tuned to EcoWatch for the latest updates.]

It has been a familiar cry at such shindigs for the past year or so, with the industry increasingly confident to come out in public with the controversial message that crude exports, which are currently only allowed under special license, are necessary to keep the current oil boom going.

It has also become common knowledge—since we published our report on Keystone XL (KXL) exports in September 2011—that the Gulf Coast refineries set to process KXL oil export a large proportion of the petroleum products they produce. Therefore the pipeline will effectively enable Canadian tar sands exports beyond the U.S. via these Gulf Coast refineries.

But Ed Morse, former Deputy Assistant Secretary of State for Energy Policy under Jimmy Carter and currently Global Head of Commodities Research at Citigroup, has raised the temperature on the KXL exports debate significantly this week with statements he made in a speech at the Platts conference.

According to Platts’ “The Barrel Blog” Morse declared that, “Canadian crudes will be exported from the U.S. Gulf Coast before the end of 2014.” He apparently went on to suggest that a Canada-South Korea free trade agreement could result in Canadian crudes being exported via the Gulf Coast through a soon-to-be-widened Panama Canal.

Morse’s timing may be a little bit out as the Panama Canal widening project was recently reported to be behind schedule, with the latest estimate for opening to the large tankers that crude exporters favor set at June 2015.

However, the prospect of Canadian tar sands crude exports from the Gulf Coast is very real. The U.S. crude oil export ban would arguably not affect Canadian crudes if the Canadian crude is not blended with any U.S. crudes. The Bureau of Industry and Security’s Export Administration Regulations for crude oil state that the BIS will approve license applications for:

“Exports of foreign origin crude oil where, based on written documentation satisfactory to BIS, the exporter can demonstrate that the oil is not of U.S. origin and has not been commingled with oil of U.S. origin.”

U.S. crude exports, which Morse and the industry more generally are now pushing hard for will be trickier, but the pressure is now on.

Morse said that, “Washington needs to come to grips with what to do with this surplus (…) the current restrictions will be the focus of a major debate.”

The surplus he’s referring to is currently speculative but relates to the abundance of light sweet oil primarily coming out of the fracked oil fields of North Dakota and Texas.

U.S. refining capacity, particularly on the Gulf Coast, is configured to process large quantities of heavy oil, a result of speculation that Canadian tar sands oil would abundantly flow to the Gulf Coast by now. The refineries have a limited capacity to process this light sweet oil. Therefore producers are taking a hit on price and starting to worry about where they will sell the increasing quantities of this oil that they expect to produce should the oil boom continue at its current pace over the next decade.

The call to lift the US crude export ban has been going on within industry circles and likely at lobby events in Washington for some time. It recently burst more overtly into the public realm with an op-ed in the Financial Times by the head of the IEA, Maria van der Hoeven.

That Keystone XL will become an export pipeline is getting clearer every day. The refineries in the Gulf Coast refining region known as PADD 3 exported 37 percent of their production in 2012, up from under 30 percent in 2011. (Figures calculated from EIA data here)

The State Department must make a National Interest Determination in deciding whether to approve the Keystone XL pipeline. What is now abundantly clear is that the pipeline is only in the interest of tar sands oil producers, who desperately need to access new markets beyond America, to raise the price they fetch for their dirty product and support the currently threatened growth of the tar sands industry.