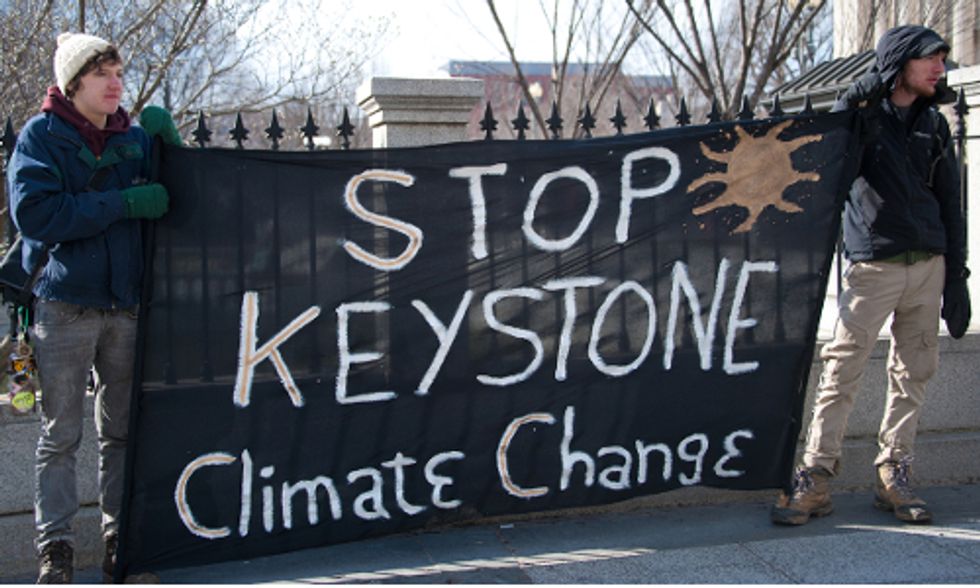 It looks like the Keystone XL pipeline will be making headlines again when Congress reconvenes next week—and three Democratic congressmen are getting a head start in laying down the gauntlet.

When Senate approval of the pipeline was defeated by one vote in November, incoming Senate majority leader Mitch McConnell vowed to make approving the pipeline his first order of business when the new Senate with its Republican majority opened its session. And new chair of the Senate Energy and Natural Resources Committee Lisa Murkowski followed through, announced that Keystone XL will be her committee's first item of business when it meets next week.

On the other side of Congress, the House has voted in the past to approve the pipeline and appears poised to do so again—so quickly, in fact, that three Democrats sent a letter to Speaker John Boehner this week, urging that the House follow the full process of vetting a bill. Representatives Peter DeFazio of Oregon, Frank Pallone of New Jersey and Raul Grijalva of Arizona, ranking members of the three committees that have jurisdiction over the pipeline—Transportation and Infrastructure, Energy and Commerce, and Natural Resources—asked Boehner not to bypass the committee process to bring an immediate floor vote.

“It is our understanding that you may schedule the House of Representatives to vote on a bill to approve TransCanada’s Keystone XL pipeline during the first two weeks of the 114th Congress," they wrote. "Given the magnitude of this issue, we urge you not to bypass the committee process and regular order for consideration of this controversial legislation. This past November, 61 new members of Congress were elected by the American people to represent their interests in the House.  These new members, and in fact all members of the House, should have the opportunity to consider, debate and propose their own ideas on this legislation through committee hearings and markups, before it is scheduled for House floor consideration. While past congresses have debated legislation to approve the pipeline, this new Congress has not had the opportunity to be a part of the process."

The three congressmen said they believe that new information has emerged since the previous pipeline hearings in the House, pointing to the dramatic changes in U.S. crude oil production and the steep drop in global oil prices and the uncertainty about the future of production of the Canadian tar sands oil the pipeline is intended to carry.

"Members of Congress should have an opportunity to learn more about these changed circumstances as they weigh the costs and benefits of TransCanada’s proposed Keystone XL pipeline," they said.

They pointed out that there is a case pending in the Nebraska Supreme Court that could impact where the pipeline can be built.

They wrote, "In February 2014, the Nebraska District Court declared that the Nebraska Governor’s Keystone XL pipeline siting decision violated the Nebraska Constitution and, as such, the proposed route was null and void. The Nebraska Supreme Court is considering this issue on appeal and is expected to issue its decision in the coming weeks. We hope that we can all agree that Members of Congress deserve to know the route of the proposed Keystone XL pipeline prior to casting a vote on whether to approve it."

They also referred to an op-ed that House majority leader Kevin McCarthy wrote in the Washington Post five months ago, promising a commitment to the committee process and regular order in the new Congress and to working across the aisle, saying "a sense of mutual respect is necessary for constructive dialogue.” They called on him to follow through on the promise.

"New and returning Members of Congress should have the right to debate the short- and long-term effects of approving a project that could reverse the carbon pollution reductions and environmental and safety improvements that we have worked so hard to achieve in the United States," they wrote. "We urge you to use this opportunity to recommit to the value of thoughtful deliberation."

President Obama has made statements suggesting he would most likely veto legislation approving the Keystone XL pipeline.