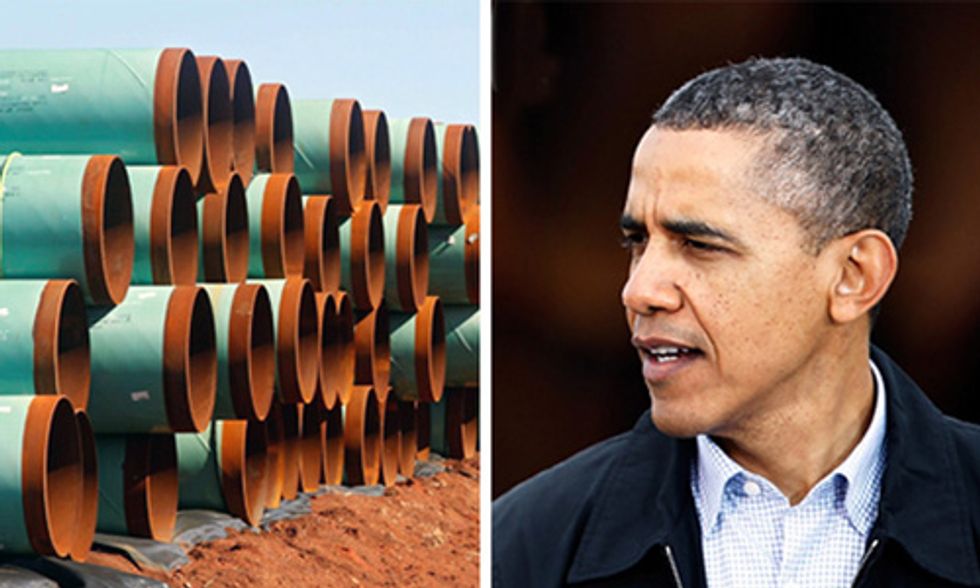 Congress plans to send the Keystone XL pipeline bill to President Obama's desk today. The president is "poised to reject" the GOP-backed legislation "with a swift veto," according to The Hill.

“I would anticipate, as we’ve been saying for years, that the president will veto that legislation, and he will, so I would not anticipate a lot of drama or fanfare around it,” White House spokesman Josh Earnest told The Hill.

Republicans say a veto will not be the end. "The allure of appeasing environmental extremists may be too powerful for the president to ignore," said Senate Majority Leader Mitch McConnell (R-KY) and Speaker John Boehner (R-OH) in an op-ed published this morning in USA Today. "But the president is sadly mistaken if he thinks vetoing this bill will end this fight. Far from it."

The Obama administration argues the bill "circumvents the ongoing process at the State Department," which the president has said he "wants to be allowed to play out," according to The Hill.  The pipeline has been under federal review for six years, going through roughly five environmental impact statements.

The GOP is already making plans to override the veto. "Right now, 63 senators back the pipeline, but 67 would be needed to override Obama," said The Hill. "In the House the path to a veto-proof majority—or two-thirds—is harder." If they don't have the votes to override it, Republicans want to "try to attach approval for the project to a broader energy package or an appropriations bill," which is harder for the president to veto, The Hill reported.

The letter lays out three key points as to why the president must veto the bill:

The coalition also cited a major study in Nature last month, which confirmed that "a serious effort to control global warming must keep the ‘dirtiest oil in the world’ safely underground." The pipeline opponents argue therefore that "Keystone XL must be evaluated not just as a pipeline but as part of the tar sands industry's plans for rapid and reckless expansion."