Keystone XL: A Choice Between Big Oil or a Sustainable Planet 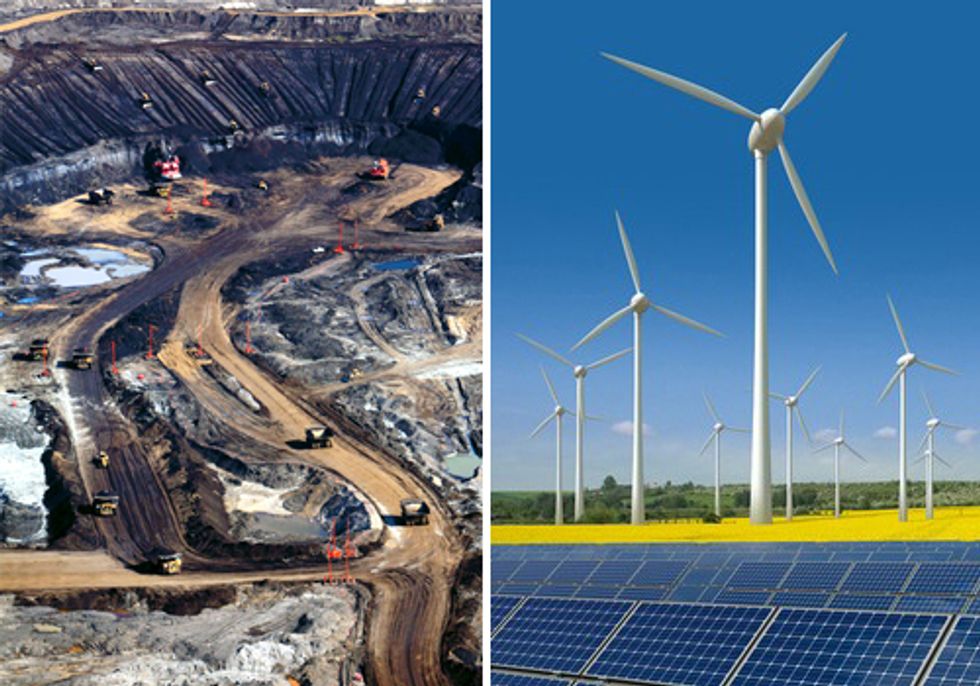 Last week Time Magazine declared that Keystone XL had become the Stonewall and the Selma of the climate movement—and today we got a reminder of just how tough those fights were, and how tough this one will be.

On a Friday afternoon, with Secretary of State John Kerry half a world away and D.C. focused on the budget fight, the State Department released a new environmental impact statement for the pipeline. Like the last such report, it found that approving a 800,000 barrel-a-day fuse to one of the planet’s biggest carbon bombs was “unlikely to have a substantial impact” on the tar sands or the climate.

That, in a word, is nonsense—some of our most important climate scientists in the U.S. have written the State Department to explain exactly how dangerous Keystone is. Just yesterday Europe’s top climate diplomat pointed out that it would send a truly terrible signal to the rest of the world.

President Obama will be making a decision in a few short months. I won’t lie: today’s report makes the odds look even tougher—and the power of the fossil fuel lobby hasn’t waned one bit.

But I’m reminded that the last time the State Department issued an environmental impact statement about the pipeline, we were just beginning this fight. That day in 2011, 50 people were arrested at the White House during the very first wave of protests against the pipeline.

This time around we’re tens of thousands of people stronger, and once again, I think we are just beginning to fight.

In these next months we need to send a signal to the White House that we’re not standing down. There are two things I think we should begin working on immediately.

First—since it’s clear that the polite but firm warnings of our top climate scientists aren’t being heard—anytime that the President or Secretary of State Kerry appears in public, it’s crucial that we let them know that we won’t accept this pipeline or the damage it will do to our climate. We need a team of rapid responders coast-to-coast who can turn around with 24 hours notice and raise a ruckus at these events when we find out about them.

If you can be on call to respond quickly when they visit near you, let us know by adding your name here: act.350.org/signup/kxl-rapid-response/.

I should also say that with our global network, both President Obama and Secretary Kerry can expect to hear from folks when they head abroad as well.

Second, we need to raise the heat this spring and summer. Significantly. To get a jump on the season, 350.org and our allies will be hosting a massive day of action and training at venues across the country in May. It will be the first muster for the grassroots army we hope will fan out across the nation this summer, and a unified statement of our intention to fight this pipeline.

If you’re keen to get involved, click here to add your name as well and we’ll get in touch about how to make it happen: act.350.org/signup/may-day-of-action/.

Even as we stick it to the pipeline, we’re going on offense as well, with a student-led divestment campaign that grows by the day (and increasingly moves off campus to city governments and faith communities too), and a Global Power Shift gathering this June in Turkey to gather young leaders across the globe.

I don’t know how this will all go down—only that it won’t go down easily. After watching Arctic sea ice practically disappear last summer, and superstorm Sandy hit New York, I can also tell you that this is a key moment for our planet, and your role in it will be remembered for a long, long time—as will the President’s.

Here’s how Time put it yesterday:

“There are many climate problems a President can’t solve, but Keystone XL isn’t one of them. It’s a choice between Big Oil and a more sustainable planet.” As with those historic moments at Stonewall or Selma, “The right answer isn’t always somewhere in the middle.”

P.S. We're also going to be hosting strategy sessions across the country on March 10 to cover these things and more. If you'd like to host a gathering to plan on all these things together, click to sign up here: act.350.org/event/2013-strategy-sessions/create/.