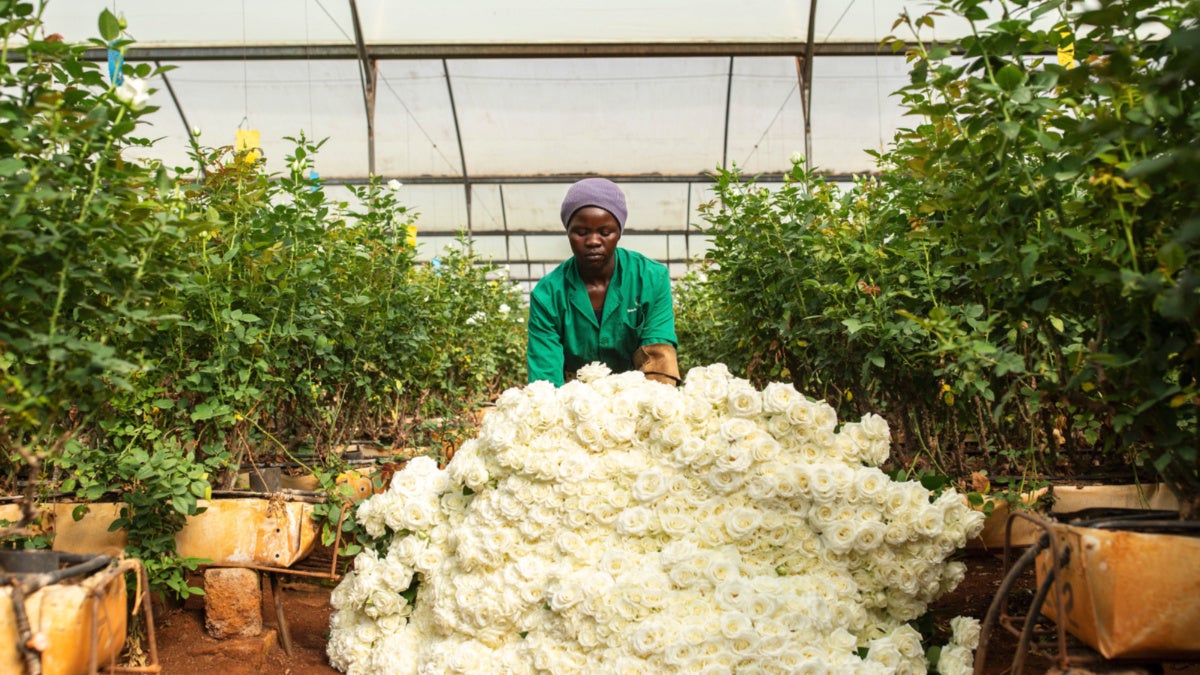 A worker at a flower farm in Kiambu County, Kenya, piles up roses to be dumped on March 24, 2020. Patrick Meinhardt / AFP / Getty Images

Gerison Ndwiga, a small rural farmer in Kenya, felt the economic sting of COVID-19 just days after the government announced a curfew and travel restrictions in late March.

For Ndwiga, who grows vine ripe tomatoes and exotic French beans 75 miles north of the nation’s capital, the pain was double: He couldn’t transport his tomatoes to Nairobi and traders stopped exporting his beans to Europe.

Within days, he made a tough choice: he left more than 16,000 pounds of ripe beans in the ground unpicked – a loss he estimated at more than US,000. “I didn’t pick anything because there were no flights in and out of Nairobi,” Ndwiga said, noting that most Kenyans have no interest in buying his long skinny beans known as haricot verts.

COVID-19 is eating away at most sectors of the world’s economy. But in Kenya, which has enjoyed a booming trade relationship with Europe in recent years, the global lockdown has hit small and large commercial farmers especially hard. Europeans are noticing this as favorite roses and passion fruits are hard to find in stores. Meanwhile, Kenyan producers are pivoting at jet speed to develop new markets closer to home, creating new revenue streams and new outlets for small farmers like Ndwiga trying to sell their crops.

“After decades of high dependency on exports, the opportunities for tapping local and regional markets are becoming clearer, especially as African economies and income levels grow,” said Jane Ambuko, associate professor and Head of Horticulture at the University of Nairobi. “Exports aren’t going away, but growing domestic markets opens new frontiers for trade while supporting our local populations, many of whom are small farmers.”

Kenya’s horticulture industry is a much-heralded success story. Fresh produce and flower exports that totaled million in 1991 sprouted 20-fold to .37 billion by 2019, much of it from roses, avocados and French beans. Every day, dozens of airplanes filled with cut flowers, fresh fruits and vegetables take off from Nairobi, most of them heading to Europe. Three million Kenyans were directly involved in growing and processing those crops.

When Europe closed its borders and economy in March, the flights – and exporters’ lifeline – snapped shut.

“The last two months have been really tough,” said Frank Obure, general manager packhouses at AAA Growers Ltd., Kenya’s third largest exporter which provides premium roses, fruits and vegetables all across Europe. Obure has wrestled with worker layoffs, cancelled deliveries, rotting crops, safety protocols and devastating rains. “I’ve never been through an experience like this before.”

How bad has it been? Before the pandemic, AAA Growers was exporting 1.4 million flowers every week. When Holland’s vast flower markets were shuttered, shipments dropped to virtually zero. Millions of roses that should have been adorning homes across Europe on Easter Sunday were wilting instead at two flower farms near Mount Kenya.

Fruit and vegetable exports have also been hurt, although not as badly since some fresh produce can be redirected to local markets – at substantially marked down prices.

All told, with produce exports down by 70 to 75 percent, Kenya’s horticulture industry is losing about EU million a day, according to Industry trade group COLEACP. But that figure does not account for thousands of small growers like Ndwiga who have been largely cut off from export markets and Nairobi’s informal urban markets due to travel bans.

Due to paperwork limitations, Ndwiga, who owns 10 acres, says he can only get into Nairobi once every two weeks to sell his tomatoes in informal markets. “I’m selling many of my tomatoes locally at village prices because they’re getting overripe.” he said, noting that prices are half what he’d fetch in Nairobi.

Ndwiga’s predicament is common, say local industry experts. “For bigger companies whose trucks are registered, they don’t have problems moving produce into Nairobi, but the small farmers who don’t have the necessary paperwork, they’re the ones who are suffering the most,” said Emmanuel Oriedo, a food and farming system consultant who works with small farmers.

To be sure, the situation has improved the past few weeks, particularly as flight restrictions to Europe are loosening a bit and more passenger planes are being converted to carry cargo. But major obstacles remain, including in-country transport bottlenecks and prohibitively high air freight costs. Shipping costs to Europe are averaging .80 to per kilogram, more than double previous rates.

TwigaFoods, which sells all of its fresh produce within Kenya, responded to COVID-19 with a new e-commerce push. In late April, it launched a partnership with e-commerce company Jumia to deliver bundles of fruits and vegetables directly to people’s homes. The effort is aimed at affluent Nairobi customers who want to avoid buying at more expensive supermarkets.

“We’d been thinking about the idea and we were starting to see more home deliveries (due to COVID-19),” said TwigaFoods CEO Peter Njongo. “For now, it’s something we’ll do in Kenya. We’ll see how it works.”