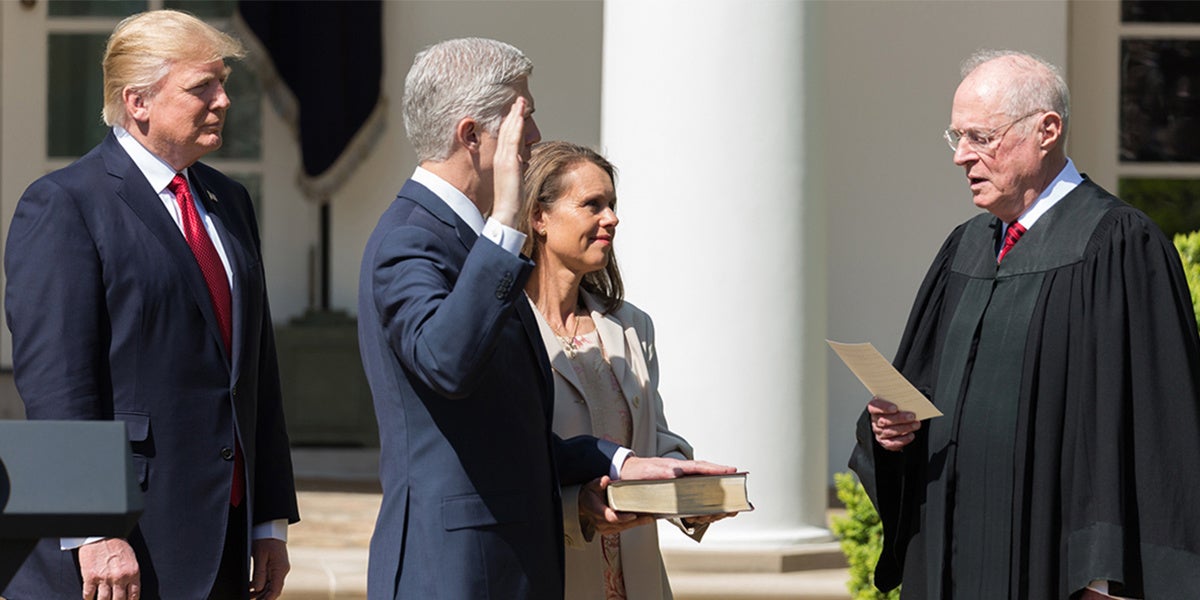 Whoever President Donald Trump nominates to replace the 81-year-old Reagan-appointee, who The New York Times called “an equal opportunity disappointer,” according to Grist, is likely to be more conservative and could determine the fate of U.S. climate policy, the Endangered Species Act and Environmental Protection Agency (EPA) head Scott Pruitt‘s attempts to roll back Obama-era clean water regulations, legal experts told The Atlantic.

“He’s been on the court just over 30 years, and he’s been in the majority in every single environmental case but one. You don’t win without Kennedy,” Harvard law professor Richard Lazarus, who has argued 14 Supreme Court cases, told The Atlantic.

“I think more than the other more conservative justices, Kennedy seemed open to embracing the idea that tough national laws were necessary to address some types of problems,” he said.

In one key case, Kennedy broke a tie and gave the EPA authority to fight climate change. In Massachusetts v. EPA, he sided with the majority in a 5-4 ruling that the EPA could regulate greenhouse gases under the Clean Air Act, even though the act does not name them specifically, if its scientists determined they posed a public health risk, according to Time.

The decision provided the legal groundwork for many of former President Barack Obama’s climate policies, but now experts are concerned a conservative court could reverse that ruling and leave the federal government without the legal means to limit greenhouse gas emissions.

“We’re not going to get another Kennedy who’s going to play that moderating role,” Stanford University environmental law professor Deborah Sivas told Time. “Since it’s a matter of statutory interpretation instead of bedrock constitutional principles I could see folks try to set up a new challenge.”

Lazarus told The Atlantic that he did not think Massachusetts v. EPA was in danger, but he was concerned a conservative court would rule against plaintiffs seeking to challenge the federal government over a lack of climate action. In Juliana v. United States, for example, 21 young people are suing the government for creating an energy system that depends on climate-altering fossil fuels.

Kennedy’s retirement also poses an immediate threat to the future of the Endangered Species Act. In October, the court will hear Weyerhaeuser Company v. United States, in which plaintiffs argue it is unconstitutional for the federal government to force private landowners to protect the habitat of endangered species on their property.

“That is a hotly contentious issue in the Supreme Court, and it’s a case that one would expect going in would have a good chance of coming out 5-4,” Lazarus told The Atlantic. “So replacing Kennedy with anybody else makes a big difference.”

Finally, his replacement might mean Pruitt will ultimately be successful in his bid to suspend Obama’s Waters of the United States (WOTUS), which determined which waters could be protected under the Clean Water Act.

WOTUS was largely based on Kennedy’s ruling in 2006, in which the Supreme Court set out to determine if wetlands qualified for protections under the Clean Water Act that protects rivers, streams and the nebulously defined “waters of the United States.” The four liberal judges ruled in favor of existing protections, while four of the conservatives ruled to strip them entirely. Kennedy wrote his own opinion saying wetlands could be protected if they shared a “significant nexus” with streams and rivers.

That was a smart legal move when Kennedy would have been the deciding vote on any challenges. But if the case brought by states and environmental groups challenging Pruitt’s suspension of Obama’s WOTUS rule does come before the Supreme Court, Kennedy will no longer be among the judges deciding it.