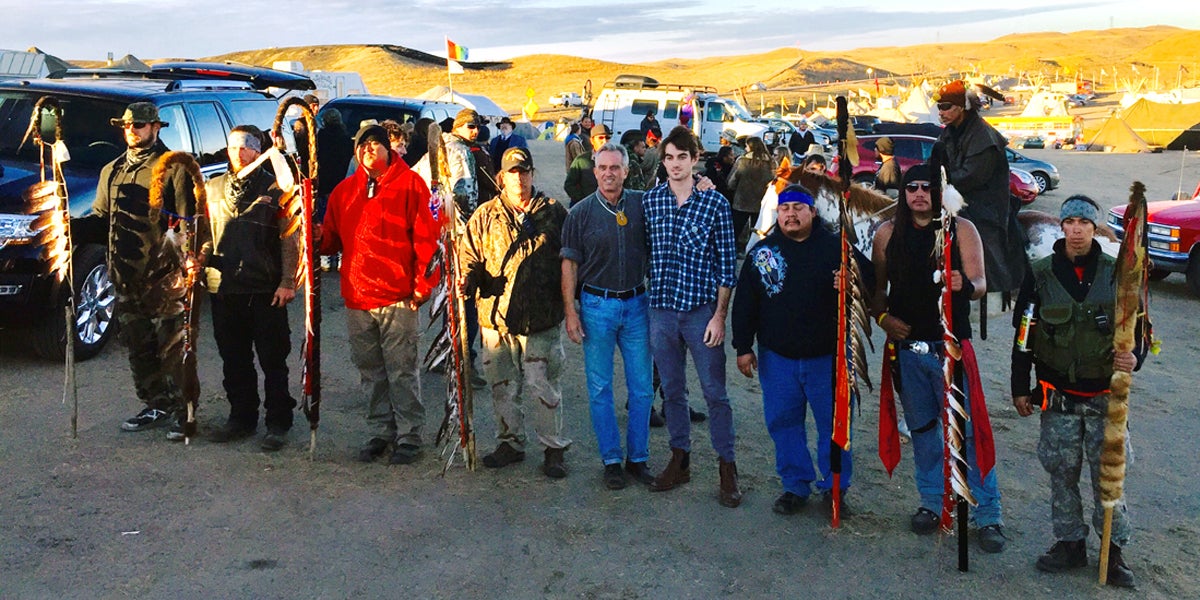 In 1966, my father held Senate hearings to investigate violent attacks by growers against pickers in the produce fields surrounding Delano, California. A young United Farmworkers organizer, Cesar Chavez, was orchestrating peaceful protests by Filipino and Chicano farmworkers against meager pay and brutal working conditions. My father only reluctantly attended the hearings. While he was sympathetic with the farmworkers’ plight, he already had a full plate of issues ranging from the Vietnam War, rioting cities to starvation in the Delta and education on Indian reservations. He didn’t think he had bandwidth for another cause.

“Why do I need to fly all the way to California,” he complained to his aid, Peter Edelman, on the airplane out. But then something made him mad; A Kern county sheriff explained to the committee that he had imprisoned the peaceful protestors “for their own protection” to safeguard them from violent growers and their hired thugs.

The prospect of law enforcement officials deploying the states police power on behalf of lawbreaking corporations against law abiding citizens whose only crime was their poverty and powerlessness made him steam. My father despised bullies and believed in rule of law. He gaveled the morning session to a close. “May I suggest that during the luncheon period of time that the sheriff and the district attorney read the Constitution of the United States?” That afternoon, he joined the farmworkers on their picket line. Chavez became his closest political and moral ally.

On Sunday, the U.S. Army Corps issued a declaration to the Standing Rock Sioux Tribe that might have been penned by the Kern county sheriff. The Corps Colonel John Henderson told Standing Rock Chairman Dave Archambault II that the agency was evicting the Dakota Access Pipeline (DAPL) protesters from their camp for their own protection.

The tribes and their supporters will be moved to a “free speech” zone a great distance from the pipeline. Henderson’s threats would be troubling if addressed to any group of American citizens, but coming from the U.S. Army Corps to the Sioux Nation, it is positively chilling. One wonders whether Colonel Henderson is even peripherally aware of the Corp’s central role in the Indian genocide, the most shameful stain on America’s national experience, our high ideals and character. 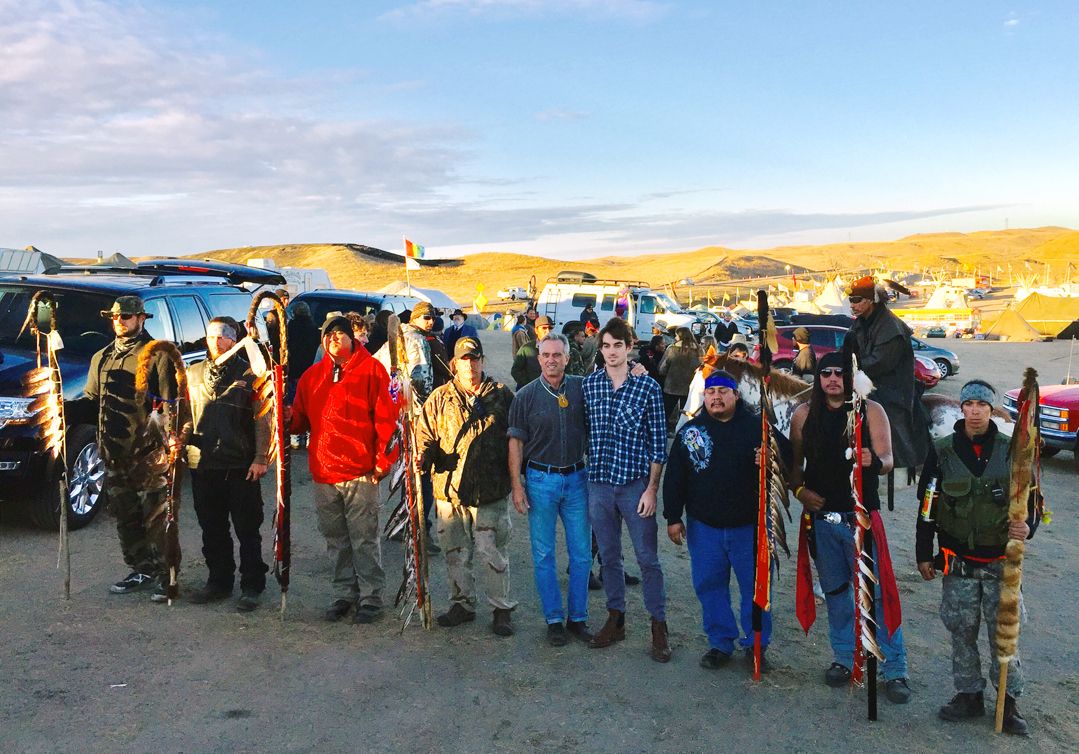 Standing with my son Conor Kennedy and the water protectors.

Anthropologist Nancy Scheper-Hughes has observed that Genocide is a continuum that runs for years, decades or centuries. It begins with marginalization and dehumanization of an identifiable minority, the theft of their lands and property, their slaughter and decimation, and the gradual squeezing of remnant populations. The central organizing principle of the continuum is a narrative that turns “others into non-persons or monsters,” that normalizes atrocities and rationalizes the “every day practice of violence.”

Colonel Henderson’s letter manages to be both, patronizing and menacing. In that sense, it captures perfectly the tone and content of a hundred letters received by Indians from U.S. Corp colonels and generals over four centuries, all of them repeating genocide’s persistent refrain: “For your own good, move off the land, or else.”

Similar letters to the Sioux preceded the evictions that reliably followed their various treaties with the American government in 1825, 1837, 1851 and 1868. Those missives were the milestones that officially declared, justified or ratified the long parade of treaty violations by the U.S. government, enforced by the Army Corps, each of them shrinking the Sioux’s rightful treaty lands.

It’s worth remembering that the lands and waterways now coveted by Dakota Access, a subsidiary of Energy Transfer Partners, are the same lands our government and the U.S. Army Corps deeded the Sioux in the treaties of 1825 and 1851. Those treaties and the Fort Laramie treaty of 1868 each promised the tribe that these deeded lands would remain the Sioux’s “so long as the grass is green, the eagles fly and the rivers flow,” or phrases of similar construction.

Eight years after we signed that last treaty, the Sioux received their most devastating removal letter from the Army Corps; Trespassing prospectors had discovered gold in the Black Hills, the sacred lands and critical hunting grounds where the Sioux wintered away from the frigid, barren plains that are uninhabitable during the cold months. Obviously white people would now need them back! In direct violation of the treaty, Colonel George Custer rode into the Black Hills to evict the justifiably angry Sioux to make way for the illegal mines. When the Sioux rose up to enforce the treaty, resisting Custer’s military attack, Colonel Henderson’s predecessors slaughtered their women and children at Wounded Knee.

Now, once again, illegal white mineral interests need the Sioux’s land, and, once again, the Army Corps is insisting the Sioux move.

Colonel Henderson’s threats are meant to protect DAPL’s promoters, Energy Transfer Partners, an outlaw oil company. Construction of the 1,200 mile Dakota Access Pipeline project clearly violates the National Environmental Policy Act, which requires a full environmental impact review for any project that “might have significant environmental impacts” on an area larger than one-half acre. There is no question that the 1,200 mile pipeline meets both criteria.

The pipeline will create more carbon pollution than 27 coal burning power plants, and cross and disrupt 209 waterways, including Lake Oahe, the Sioux’s only water source. The Sioux recognize this as the final eviction—without Lake Oahe, their remnant reservation is uninhabitable. The Corp considers a catastrophic water poisoning pipeline failure, so likely, that following protests by Bismarck residents, Henderson agreed to move the pipeline away from its more direct route across the Bismarck water supply and into Indian country.

Henderson’s menacing letter on behalf of yet another law-breaking mineral interest has mobilized 300 American tribes who have assembled to protest the illegal construction, the largest gathering of tribes in a century. Indian Country regards DAPL as an existential threat; for the tribes the outlaw enterprise, forced upon them at gunpoint, represents the extension of their 500 year genocide into a new millennium. But Chief Archambault has consistently stated the Indians are not fighting only for Indian rights but for American democracy and for humanity’s survival.

Energy Transfer’s lawbreaking comes at a critical juncture in human history as governments struggle to choose between oil company profits on the one hand, us people and the planet on the other. The juxtaposition of forces at Standing Rock is Orwellian; on one side are the Sioux and their supporters.

The Sioux have been highly disciplined about maintaining the respectful and non-violent character of their demonstration. Tribal committees train and screen protesters and restrict access to the protest sites to those who can be trusted to maintain prayerful and peaceful protest in the face of ferocious police violence. These demonstrations mainly consist of quiet prayer ceremonies.

Deployed against them is an out of control police force and DAPL’s army of private security guards. The unhinged fury of their attacks is reminiscent of the police violence against southern civil rights demonstrators in the 1960’s. To make way for an outlaw company, highly militarized police and private security forces have unleashed the awesome military might of state police power against law abiding American citizens. The police and corporate security brigades appear to be testing a suite of high-tech and often savage, crowd control equipment now in the possession of our militarized police forces.

On a recent trip to Standing Rock, I saw truck mounted facial recognition equipment tagging protestors from surrounding hilltops. I experienced the jarring barrage of acoustic cannons. The state and private security forces deployed water cannons against protesters in sub-freezing weather endangering their lives, tear gas bombs, pepper spray, flash bang grenades which might cost one protester her arm, and plastic bullets which felled a Sioux elder the day I left. Largely out of sight of the national press, the police employ terror tactics and behave like savage animals. 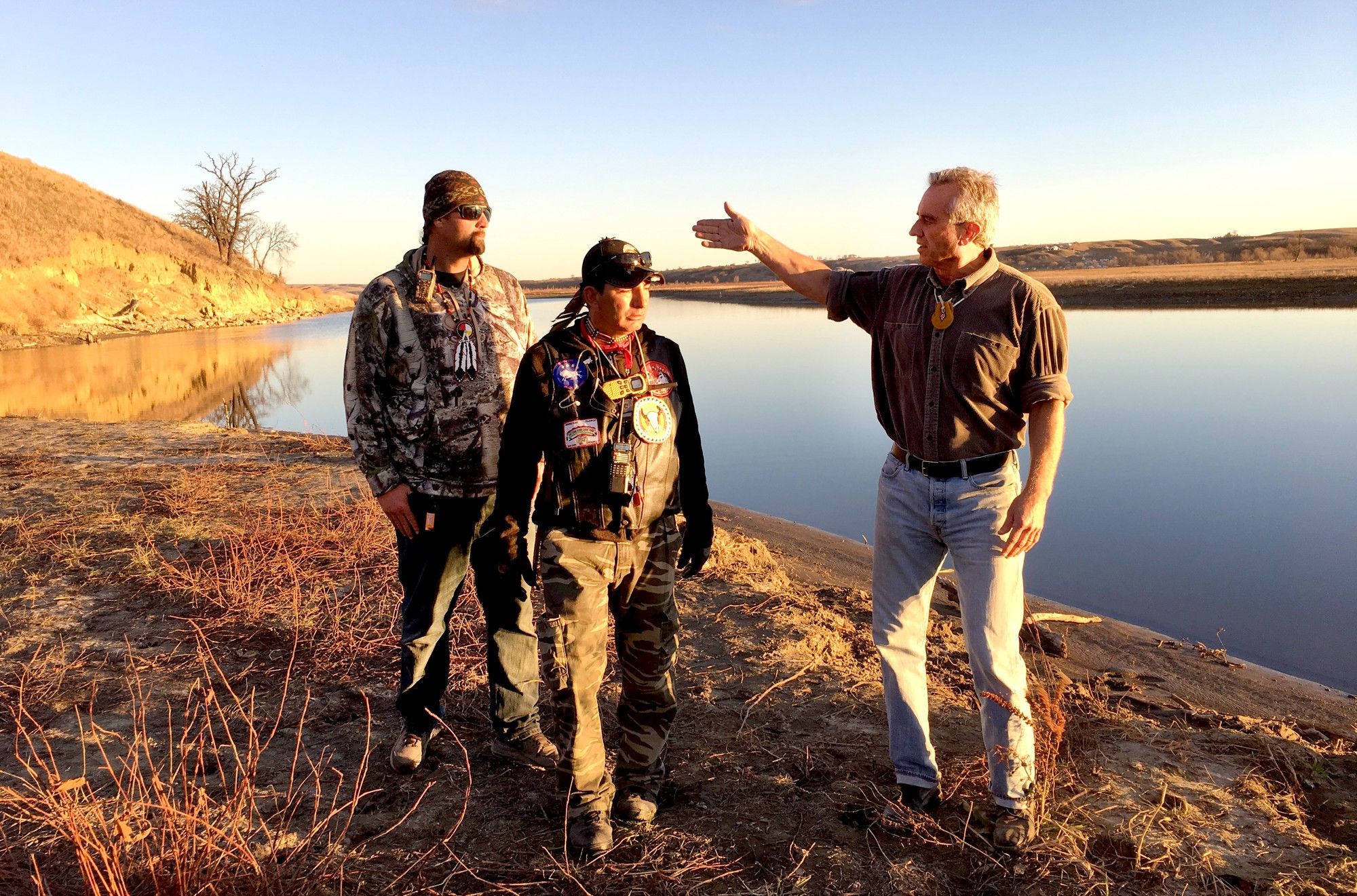 The Obama administration has the power to end this conflict, overnight, simply by declaring that the pipeline company comply with existing federal law and complete an environmental impact statement before DAPL is allowed to proceed.

The company dreads this outcome; an EIS would require Energy Transfer Partners to disclose the true cost and benefits of its project. The American people would see, through all the smoke and mirrors, that this project is a 1,200-mile boondoggle designed to allow billionaire investors like Donald Trump to make themselves richer by impoverishing other Americans.

The company’s claims to be a job creator will wither in the daylight. Like the Keystone XL pipeline, DAPL is unlikely to produce even 100 long term jobs while jeopardizing the water supply for 18 million people and the breadbasket of American food production.

Despite its contrary denials to the public and regulators, DAPL has admitted privately that its oil will be shipped to Asia where it will lower manufacturing costs for America’s foreign competitors and aggravate climate chaos. If Obama were to order an Environmental Impact Statement, our incoming president, Donald Trump, would be powerless to reverse that determination. The question now is: Will Obama act?

In the meantime, Americans who care about freedom and justice are flocking to Standing Rock to support the Sioux, just as justice loving Americans of an earlier generation went to Selma, to Jackson and to Delano.

“I’ll see you at Standing Rock” has become the battle cry for Americans who still share an idealistic vision for our country.