This Ocean Farmer Grows Food That Cleans up Pollution 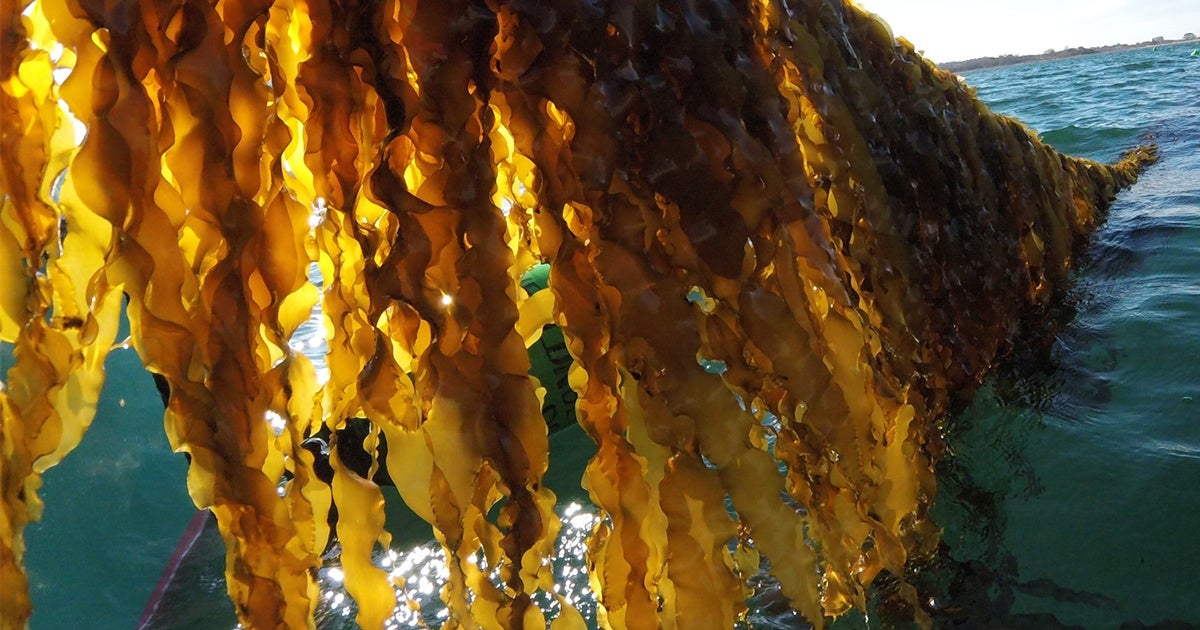 Catherine Puckett needs to be close to the ocean. “I just can’t be away from it,” she said. “It means everything to me.” She has to see it and smell it and hear the bells that ring from buoys offshore when a heavy sea rolls in from the east. When she is waist-deep in water, ankle-deep in mud, salt marsh on one side and water on the other, there’s only one way she can describe it. “It’s magical,” she said. She even wades in during the coldest days of winter, often breaking through ice to get there. “I think to myself: ‘why doesn’t everybody do this?'” she said.

Puckett, 36, known locally as “Oyster Wench,” a single mother with two young children, lives on Block Island, about a dozen miles off the Rhode Island coast. She represents a new generation of ocean farmers, one whose singular connection to the water is coupled with a passion for the environment. She grows shellfish and kelp on her farm, located in the waters of the Great Salt Pond, using sustainable fishing methods that both preserve the ocean’s ecosystems and fight climate change.

“What we are trying to do is grow food from the ocean that doesn’t hurt the environment or the climate and, in fact, is working toward restoring both,” she said. 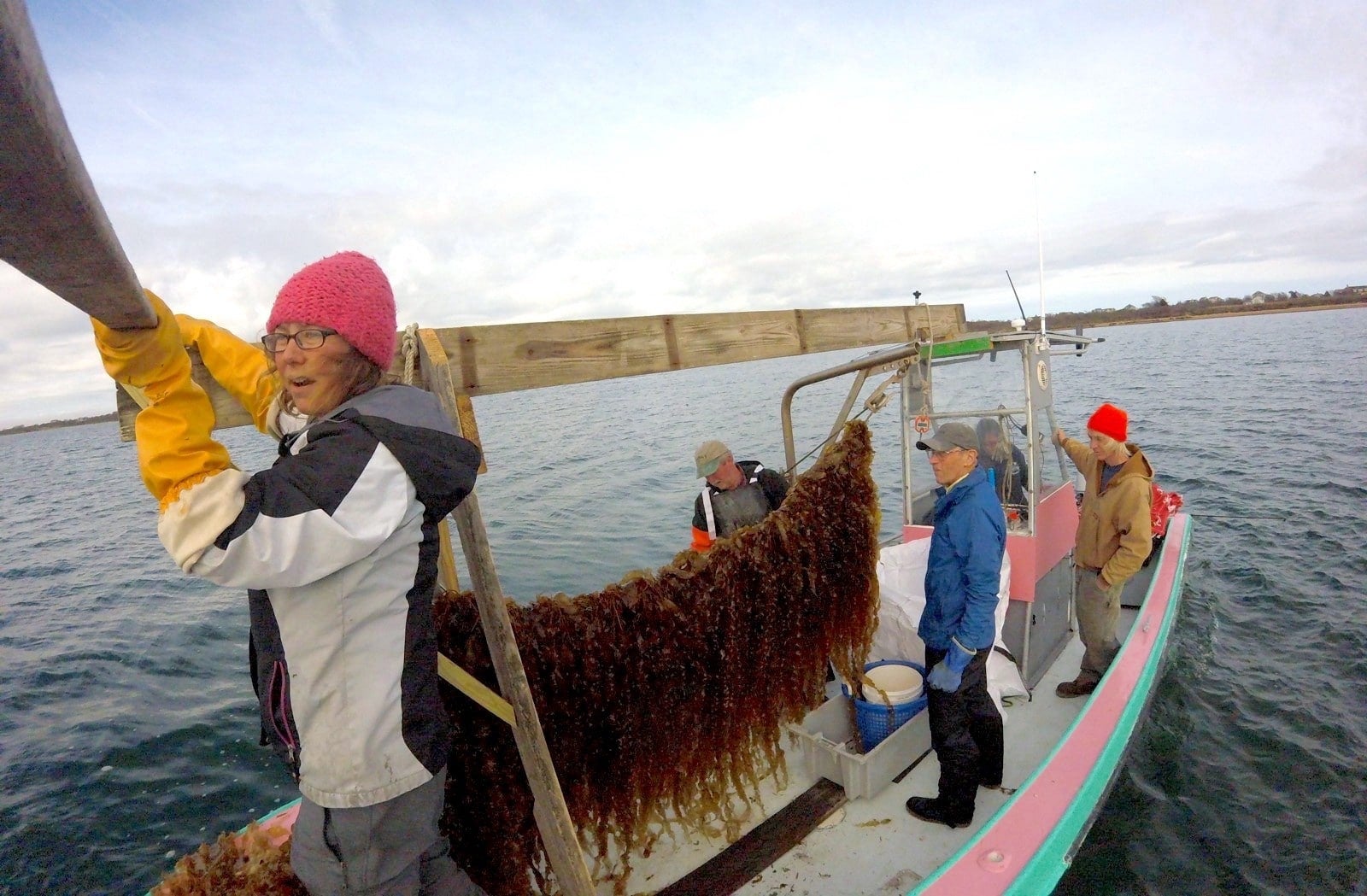 She is one of a growing number of ocean farmers engaged in 3D farming, cultivating her crops vertically in straight up-and-down water columns, using no fertilizers, freshwater or feed. Puckett’s clams are buried and covered with nets to protect them from predators, while her oysters grow in bags. Her kelp develops on lines.

The operation helps cut down on pollution in numerous ways. The shellfish help filter pollutants from the water. They also offer a source of protein to diners, who might otherwise eat beef, which is made from cows who burp and fart methane, a potent heat-trapping gas. For those who can’t give up their beef, ocean farming can help. Research shows that when cows eat a little seaweed, they produce less methane.

Seaweed also soaks up carbon and nitrogen, two pollutants lingering in the water. Carbon released by cars, trucks, factories and power plants is entering the ocean, turning waters more acidic. Nitrogen fertilizer used on farms is making its way into rivers and then to the ocean, creating dead zones. Seaweed cleans up both. If ocean farmers devoted a little less than 5 percent of U.S. waters to growing seaweed, they could clean up an estimated 135 million tons of carbon and 10 million tons of nitrogen, according to a report from the World Bank. 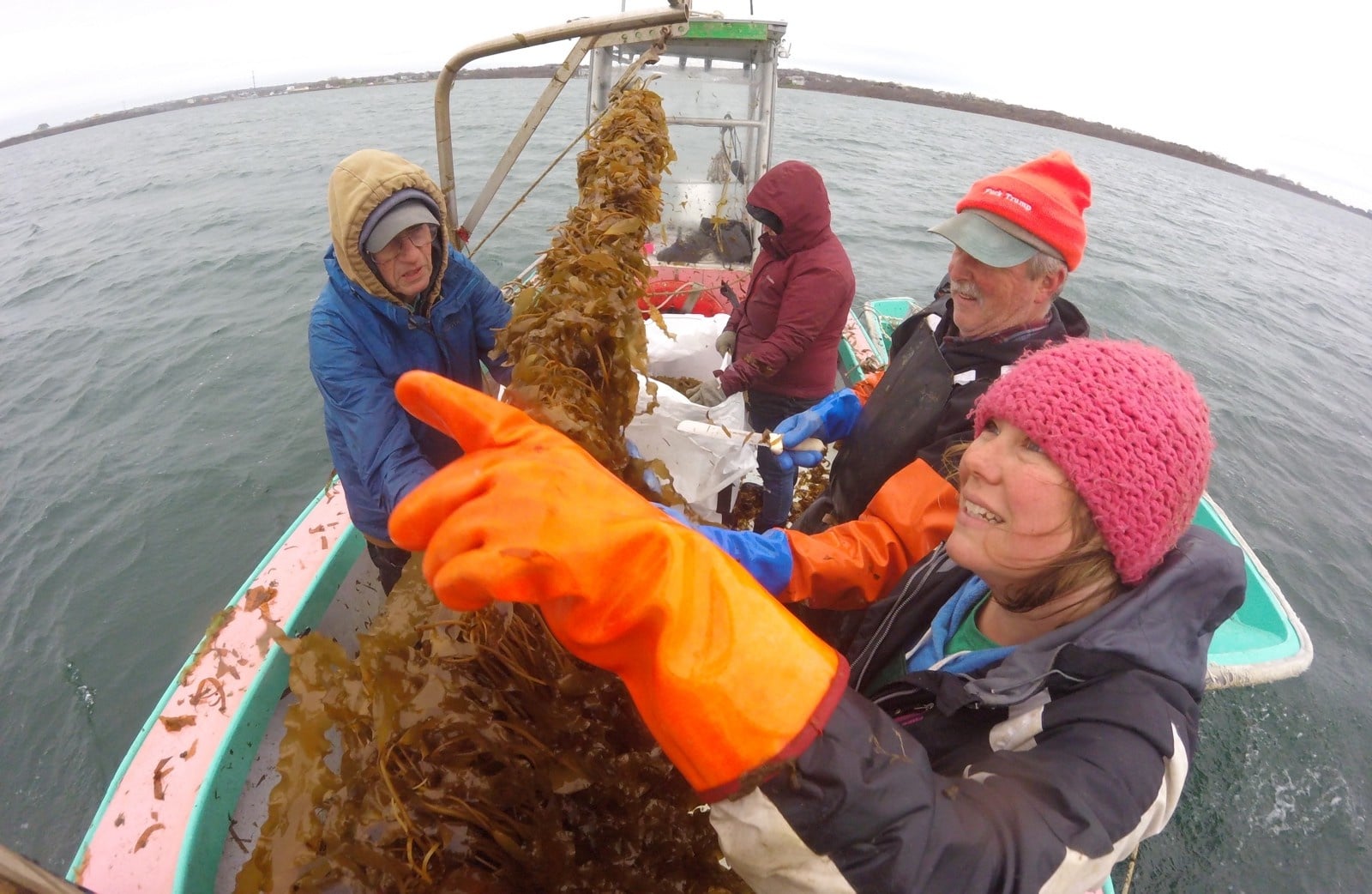 Puckett sells most of what she produces to a Maine food processor, and the remainder to land farmers who use it to fertilize their vegetables. “The kelp is sequestering carbon and nitrogen, so by selling it to the farmers as fertilizer, we are closing the loop,” she said. “We are making the circle complete.” She also keeps some for herself. She uses it in salads, as a substitute for spinach, and as a pizza topping. She also dries it, then bakes chips. “Those never make it out of the kitchen,” she said.

Puckett developed her operation with the help of GreenWave, a nonprofit helping aspiring growers get into vertical farming. Bren Smith, a former commercial fisherman, founded the organization after seeing the global fishing industry was decimating wild fish. He developed his vertical farming system off the shores of the Long Island Sound in Connecticut. It’s now being used by growers in New York, southern New England, California, Alaska and the Pacific Northwest.

“We have requests to start farms in every coastal state in North America and from 20 countries,” said Smith, author of a new book, Eat Like a Fish. “People come from all walks of life. They are shell fishers, like Catherine, who are looking to diversify, former fishermen who want to transition, land-based farmers who want to leave the land, and indigenous people who want to revive their traditions and be on the forefront of climate farming.”

He believes his model could ease overfishing, which threatens the extinction of many fish species. “We have to reimagine the seafood dinner plate and move wild fish to the edges, and put shellfish and seaweed to the center,” Smith said. “Because what we grow has zero inputs, our food will be the most affordable food on the planet.” 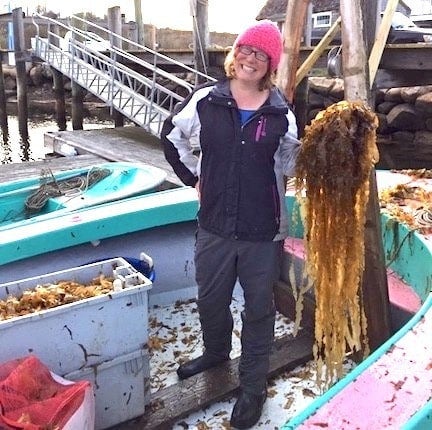 Catherine Puckett holds a bunch of kelp on her boat.

Puckett shares this vision. After spending childhood summers on Block Island, she later decided to stay and fish. She started by working for the Block Island Shellfish Farm, then bought it five years ago. She’s the only woman on the island running an ocean farm, and her bright teal and pink boat — still unnamed — is a standout.

“My kids wanted me to paint it rainbow and sparkle, but I said how about pink?” she said, laughing. “I wanted to make a statement that it was a ‘girl’ boat. There are a couple of guys here who help me with the kelp harvest who tease me — that they have to go out on a girl boat — but they are OK with that. Actually, the men here have known me for a long time, and have seen me go through my growing pains, and have helped me so much.”

Puckett started with quahog clams, and then added scallops and oysters. She had long wanted to grow seaweed, but didn’t know where to start. Another oyster farmer told her about GreenWave’s Farmer-in-Training program, which taught her how to use the 3D model, then gave her free kelp seed for her first harvest. She now farms a one-acre shellfish site, and — in deeper waters — a two-acre kelp site, both leased from the state. Her kelp “grew like crazy,” she said. “It was mind-blowing.” 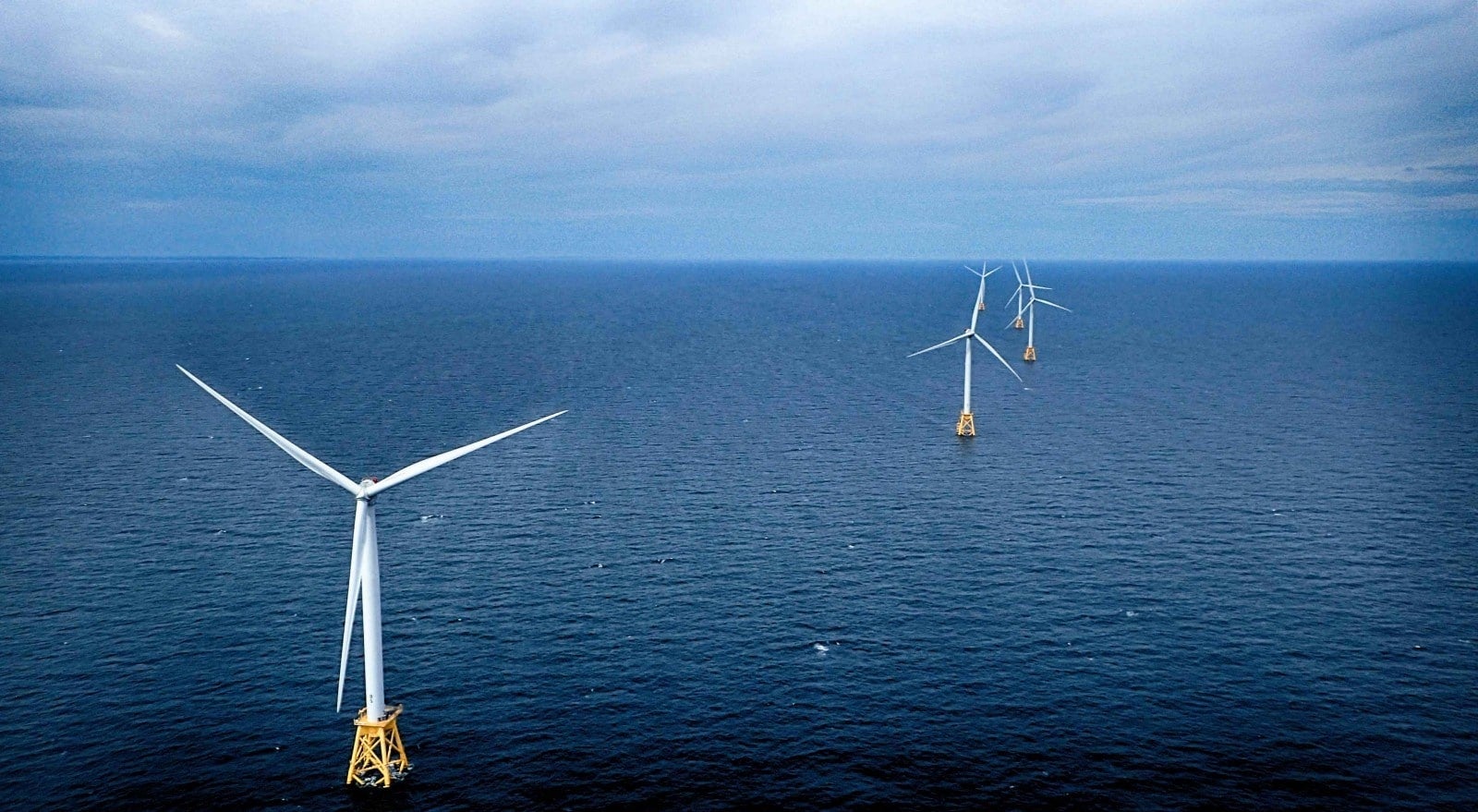 Puckett is happy that her work is curbing pollution, and she is proud that Block Island is the site of America’s first offshore wind farm, which began operating in 2016 and has boosted tourism to the island, according to a recent study. Puckett eyes the turbines as future anchors to grow her seaweed. Smith thinks it’s a great idea. “Why just harvest wind, when we can do food and fertilizer in the same space?” he said.

Smith wants to replicate Puckett’s success elsewhere. “Imagine the impact if we scaled this model globally. The possibilities are limitless,” he said. He envisions 50 small scale farms, each with a seafood hub and hatchery on shore, and a ring of entrepreneurs to develop markets for the products.

“We want to have 100,000 Catherine Pucketts worldwide,” he said. “Amazingly, the people coming to this industry are not grizzled fishermen like me — we have plenty of those — the majority are women. This means women could be the architects of the blue economy. That is a very exciting prospect.”