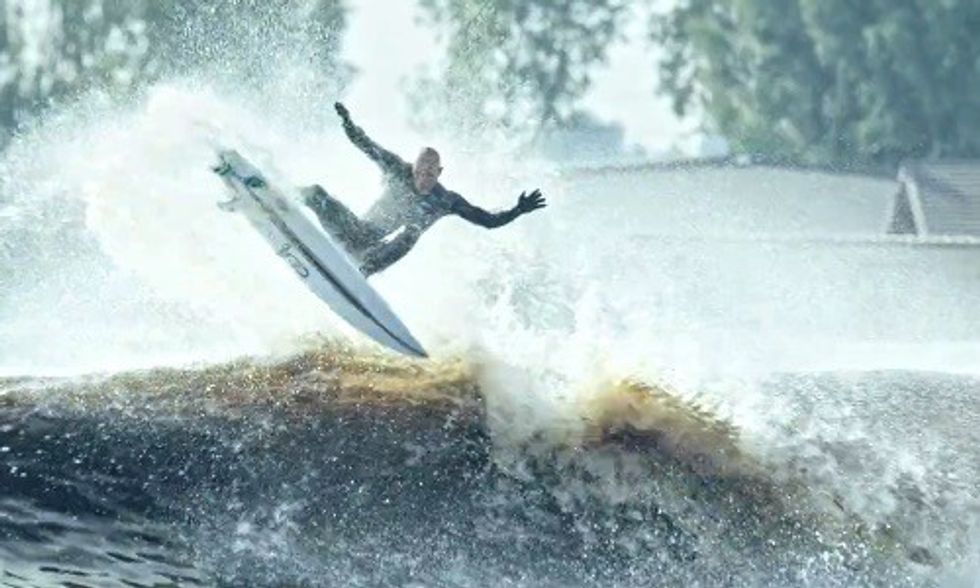 Remember when surfing legend Kelly Slater and his team of engineers at the Kelly Slater Wave Company unveiled their awesome man-made wave last month? Well, as it turns out, this "freak of technology" is powered entirely by solar.

Under this program, PG&E customers can purchase half or all of their electric power from solar farms in Northern and Central California. The program was created through Senate Bill No. 43—Electricity: Green Tariff Shared Renewables Program—to expand consumer access to renewable energy resources.

Slater's Lenmoore, California-based wave machine—touted as the “longest, rideable open-barrel man-made wave in the world”—is one of the first to take advantage of the initiative.

“We are committed to encouraging sustainable development at any site using our technology," Noah Grimmett, the general manager of Kelly Slater Wave Company, said in an statement. "As part of this commitment, we are pleased that our first site in Central California is 100 percent powered by solar energy through PG&E’s Solar Choice,"

"This program allows Kelly Slater Wave Company to not only be a pioneer in wave technology, but also in supporting sustainable power initiatives as we act environmentally through an alternative to installing solar panels and fulfill our vision of building the best man-made wave,” Grimmett added.

This isn't the first time Slater has turned his eco-passion into good causes. His love of the ocean translated into his sustainable clothing line, Outerknown, that includes a line of 100 percent recyclable clothing made from reclaimed fishing nets.

The 11-time world surfing champion's man-made wave was a passion project 10 years in the making. He wrote on Instagram:

Now that the world title has been decided and events for the year have finished, I'm excited to show you what I've been sitting on for the past couple of weeks. For nearly ten years, my team and I have been working on creating the first truly world-class, high-performance, human-made waves. This is something I dreamt about as a kid. Through rigorous science and technology, we've been able to design and build what some said was impossible, and many very understandably never thought would actually happen. I'm proud to say we took our time to get it right, and the first fully-working prototype of the wave now exists (a huge personal thank you to everyone in our lab and on our team for seeing this through!). I'll be sharing more details in the coming weeks and months but I can't wait any longer to share a film of my experience surfing the wave for the first time, almost two weeks ago. It was an insane day. I'm still a little in disbelief, and trying to process how much fun this wave is, but it certainly feels like this is going to change a lot of perceptions about human-made waves. There's a direct link in my bio to kswaveco.com to view the short film. Can't wait to see other people surf it soon and show what is possible on this thing. #KSWaveCo #FreakOfTechnology #LooksLikeSuperbank but #NotCrowded!

Check out the artificial wave in action in the video below: