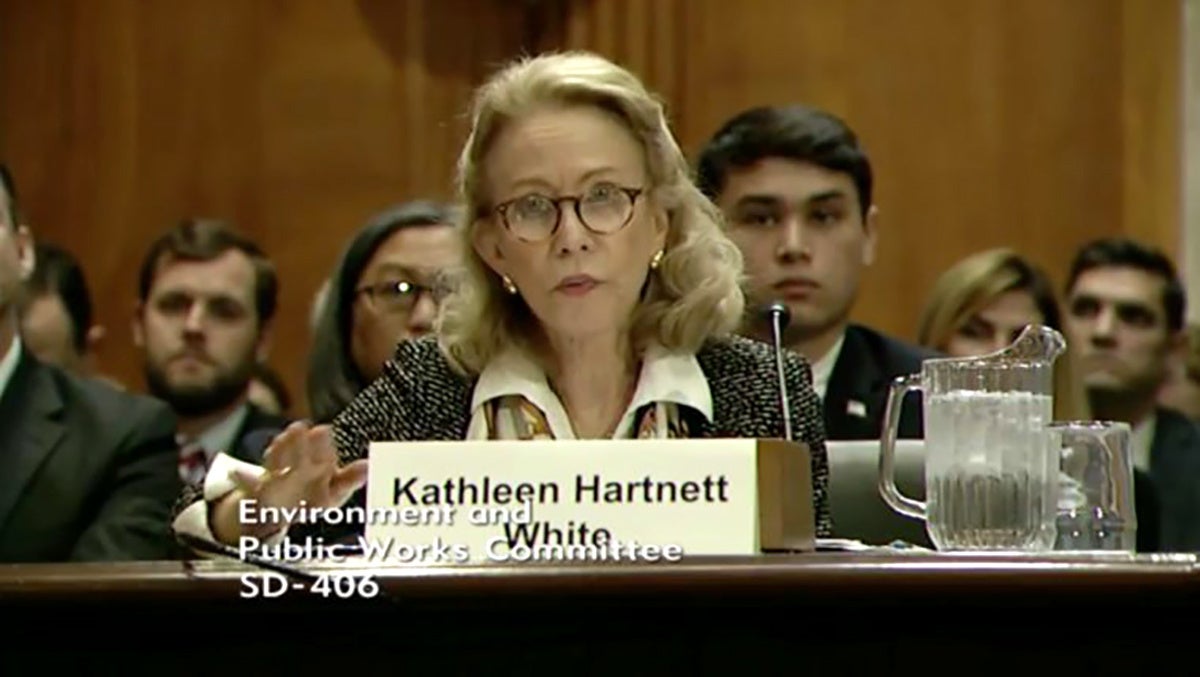 Kathleen Hartnett White, President Trump’s pick to chair the White House’s Council on Environmental Quality (CEQ), testified at her Senate confirmation hearing on Wednesday and, like many Trump nominees to date, showed herself to be an unqualified, polluter-friendly ideologue who rejects mainstream climate science.

“Your positions are so far out of the mainstream, they are not just outliers, they are outrageous,” Massachusetts Sen. Ed Markey exclaimed at one point in clear exasperation. “You have a fringe voice that denies science, economics and reality.”

What Markey failed to note, however, is that White has personally experienced climate change-related extreme weather events in her home state of Texas, and scientists say they are only going to get worse.

Unqualified from the Start

White, who Trump previously considered for U.S. Environmental Protection Agency (EPA) administrator, is a cattle rancher and dog breeder who chaired the Texas Commission on Environmental Quality (TCEQ)—the Lone Star State’s version of the EPA—from 2001 to 2007 and was a member of the Environmental Flows Study Commission, the Texas Water Development Board and the Texas Wildlife Association board.

Her qualifications for those positions? None.

White earned her bachelor’s and master’s degree in Humanities and Religion at Stanford, attended Princeton’s comparative religion doctoral program, and completed a year of law school at Texas Tech. It’s not quite the background one would expect for someone serving on environmentally related boards, let alone running the TCEQ. But in Texas, as in Florida and Wisconsin, ideology trumps science credentials, and White holds a politically correct pro-fossil fuels viewpoint.

That bias serves her well in her current job with the Texas Public Policy Foundation, a libertarian think tank funded by what Texans for Public Justice characterized as a “Who’s Who of Texas polluters, giant utilities and big insurance companies.” Among TPPF’s benefactors are Chevron, Devon Energy and ExxonMobil; Koch Industries and its family foundations; and Luminant, the largest electric utility in Texas. White, who joined TPPF in January 2008, runs the nonprofit’s energy and environment program and co-heads its Fueling Freedom Project, whose mission is to “push back against the EPA’s onerous regulatory agenda that threatens America’s economy, prosperity and well-being.”

Recent media coverage of White’s nomination for the CEQ post has shined a light on her lack of scientific understanding—and her paranoia about the rationale for addressing climate change. She falsely claims that climate science is “highly uncertain,” characterizes it as the “dark side of a kind of paganism, the secular elite’s religion,” and argues that the “climate crusade,” if unchecked, would essentially destroy democracy. That’s right. White believes the United Nations and climate scientists are bent on establishing a “one-world state ruled by planetary managers.” Further, she routinely trumpets the benefits of carbon emissions, insisting that carbon dioxide “has none of the characteristics of a pollutant that could harm human health.” Carbon is a good thing, she said, because “the increased atmospheric concentration of man-made CO2 has enhanced plant growth and thus the world’s food supply.” Never mind that farmers and ranchers in her own state have been whipsawed in recent years by devastating heat waves, drought and floods, all linked to climate change.

At her confirmation hearing on Wednesday, White cited reducing ground-level ozone in Houston and Galveston when she chaired the TCEQ as her greatest accomplishment. But according to a recent editorial in the Dallas Morning News, she pushed for weaker ozone standards while she was at the helm of the agency.

“Her record is abominable,” the Oct. 17 editorial stated. “White consistently sided with business interests at the expense of public health as chair of the Texas Commission on Environmental Quality. She lobbied for lax ozone standards and, at a time when all but the most ardent fossil fuel apologists understood that coal isn’t the nation’s future, White signed a permit for a lignite-fired power plant, ignoring evidence that emissions from the lignite plant could thwart North Texas’ efforts to meet air quality standards.”

Predictably, White also disparages renewable energy. “In spite of the billions of dollars in subsidies, retail prices for renewables are still far higher than prices for fossil fuels,” she wrote in her 2014 tract, Fossil Fuels: The Moral Case. “At any cost, renewable energy from wind, solar, and biomass remains diffuse, unreliable, and parasitic….” In fact, fossil fuels have received significantly more in federal tax breaks and subsidies for a much longer time than renewables; new wind power is now cheaper than coal, nuclear and natural gas; and the Department of Energy projects that renewable technologies available today have the potential to meet 80 percent of U.S. electricity demand by 2050.

Most of Trump’s nominees for other key science-based positions—notably EPA Administrator Scott Pruitt—agree with White’s twisted take on climate science and renewables. What sets her apart, besides her penchant for calling advocates for combating climate change “pagans,” “Marxists” and “communists,” is her up-close-and-personal experience with climate change-related extreme weather events.

White and her husband, Beau Brite White, live in Bastrop County, an outlying Austin bedroom community, and own a vast cattle ranch of 118,567 acres—more than 185 square miles—in Presidio County, which sits on the state’s southwest border with Mexico.

Bastrop and Presidio counties are both struggling with drought due to low precipitation and high temperatures and, like the rest of Texas, suffered from an especially extreme drought in 2011. Part of a prolonged period of drought stretching from 2010 to 2015, the one in 2011 was the hottest and driest on record, and climate change likely played a significant role. A 2012 study published in the Bulletin of the American Meteorological Society found that the high temperatures that contribute to droughts such the one that struck Texas in 2011 are 20 times more probable now than they were 40 to 50 years ago due to human-caused climate change.

The Fourth National Climate Assessment report, released on Nov. 3, agreed. “The absence of moisture during the 2011 Texas/Oklahoma drought and heat wave was found to be an event whose likelihood was enhanced by the La Niña state of the ocean,” the report, authored by scientists at 13 federal agencies, concluded, “but the human interference in the climate system still doubled the chances of reaching such high temperatures [emphasis added].”

The 2011 heat wave was particularly intense in Presidio County. According to Texas State Climatologist John Nielsen-Gammon, a meteorology professor at Texas A&M University, the county “achieved the triple-triple: at least 100 days reaching at least 100 degrees.”

Bastrop County, meanwhile, has become a tinderbox. Wildfires are happening there with greater frequency and intensity for a variety of reasons, including rising temperatures and worsening drought as well as population growth and development. In 2011, the county experienced the worst wildfire in Texas history, which destroyed more than 1,600 homes and caused $325 million in damage. Two years ago, in October 2015, the Hidden Pines Fire torched 7 square miles in the county and burned down 64 buildings.

White may refuse to acknowledge what is happening in her own back yard, but most of her neighbors realize that human-caused climate change is indeed a problem, according to polling data released last March by the Yale Program on Climate Communication. The survey, conducted in 2016 in every county nationwide, found that a majority of residents in Bastrop and Presidio counties—67 percent and 78 percent respectively—understand that global warming is happening, while more than half of the respondents in both counties (52 percent in Bastrop and 62 percent in Presidio) know it is mainly caused by human activity.

Majorities in both counties also want something done about it. More than 70 percent want carbon dioxide regulated as a pollutant and at least 65 percent in both counties want states to require utilities to produce 20 percent of their electricity from renewables.

Given their responses, White’s neighbors in Bastrop and Presidio counties make it clear that if they were polled on whether she should become the next chair of a little-known but powerful White House office that oversees federal environmental and energy policies, a majority would likely say no—and with good reason: Unlike White, for them, seeing is believing.

Elliott Negin is a senior writer at the Union of Concerned Scientists. Research assistance was provided by Chanelle Kacy-Dunlap.