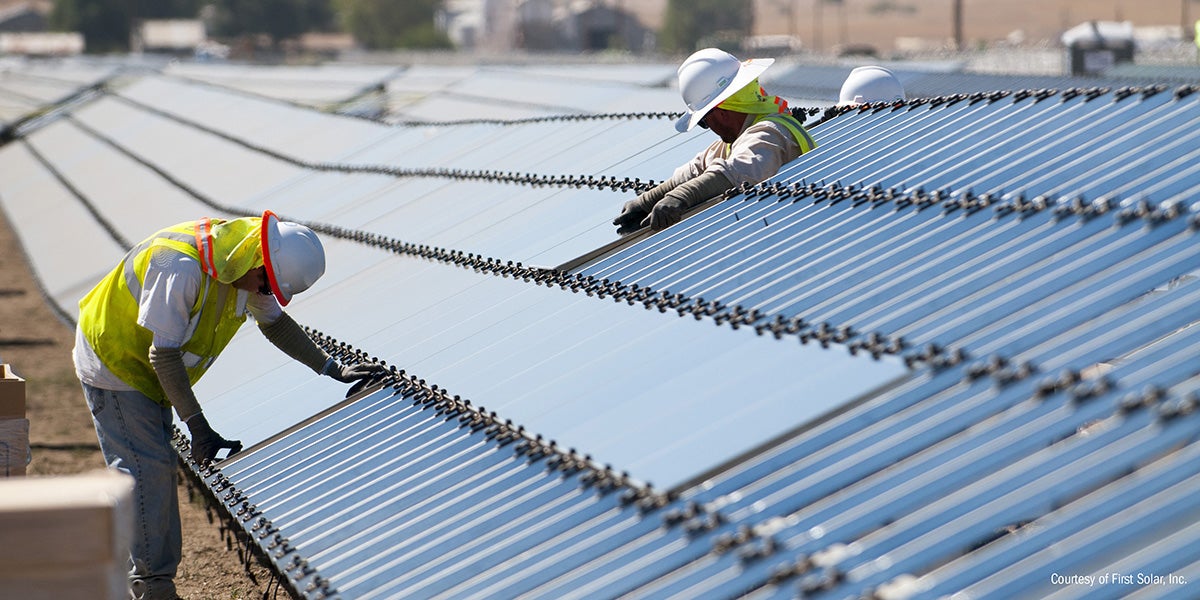 In the final hours of Ohio’s lame-duck session, lawmakers passed House Bill 554 late Thursday night, which will freeze clean energy mandates for another two years if Gov. John Kasich signs the bill. More than 25,000 jobs could be at risk.

The state’s original Renewable Portfolio Standard (RPS), SB 221, was passed in 2008. It set a target for the state to get 25 percent of its electricity from “advanced energy sources” by 2025, with a requirement that at least half (12.5 percent or more) would be generated from “renewable energy resources,” including one-half of one percent from solar and 50 percent of the energy to be generated within the state.

A two-year freeze was enacted when Gov. Kasich signed SB 310 on June 13, 2014. HB 554 now seeks to extend that freeze, making renewable energy targets voluntary for utilities. Ohio is the only state in the nation that has frozen its RPS. To date, 38 states have adopted RPS targets.

“Ohio’s renewable energy and energy efficiency standards have been frozen for the past two years, costing the state its place as a national leader in the clean energy economy by hampering energy innovation, investment, and jobs,” said Dick Munson, Midwest clean energy director for Environmental Defense Fund. “Before the freeze, these standards saved families money and brought huge investments into the state, supporting more than 25,000 jobs, saving Ohioans over $1 billion on their electricity bills, and slashing the Buckeye State’s air pollution.”

A 2015 survey by
Environmental Entrepreneurs (E2), a national, nonpartisan group of business owners and investors, showed that job growth in the clean energy sector in Ohio slowed to just 1.5 percent following implementation of the freeze in 2014. Moreover, those firms that did grow had to find business out of state.

“Investments in renewable energy in Ohio have dried up,” stated the E2 report. “Solar development has ground to a halt, with new solar resources dropping below 100 kW per month when industry averages for the six months prior stood at 1 MW or more per month.”

One example is
First Solar. The company employs 1,200 people in Ohio and spends $100 million a month on its production and research labs in the Toledo area, according to testimony by its director of regulatory affairs Colin Meehan. The Cleveland Plain Dealer reported that the company would “take a hard look at staying in Ohio” if HB 554 were enacted. 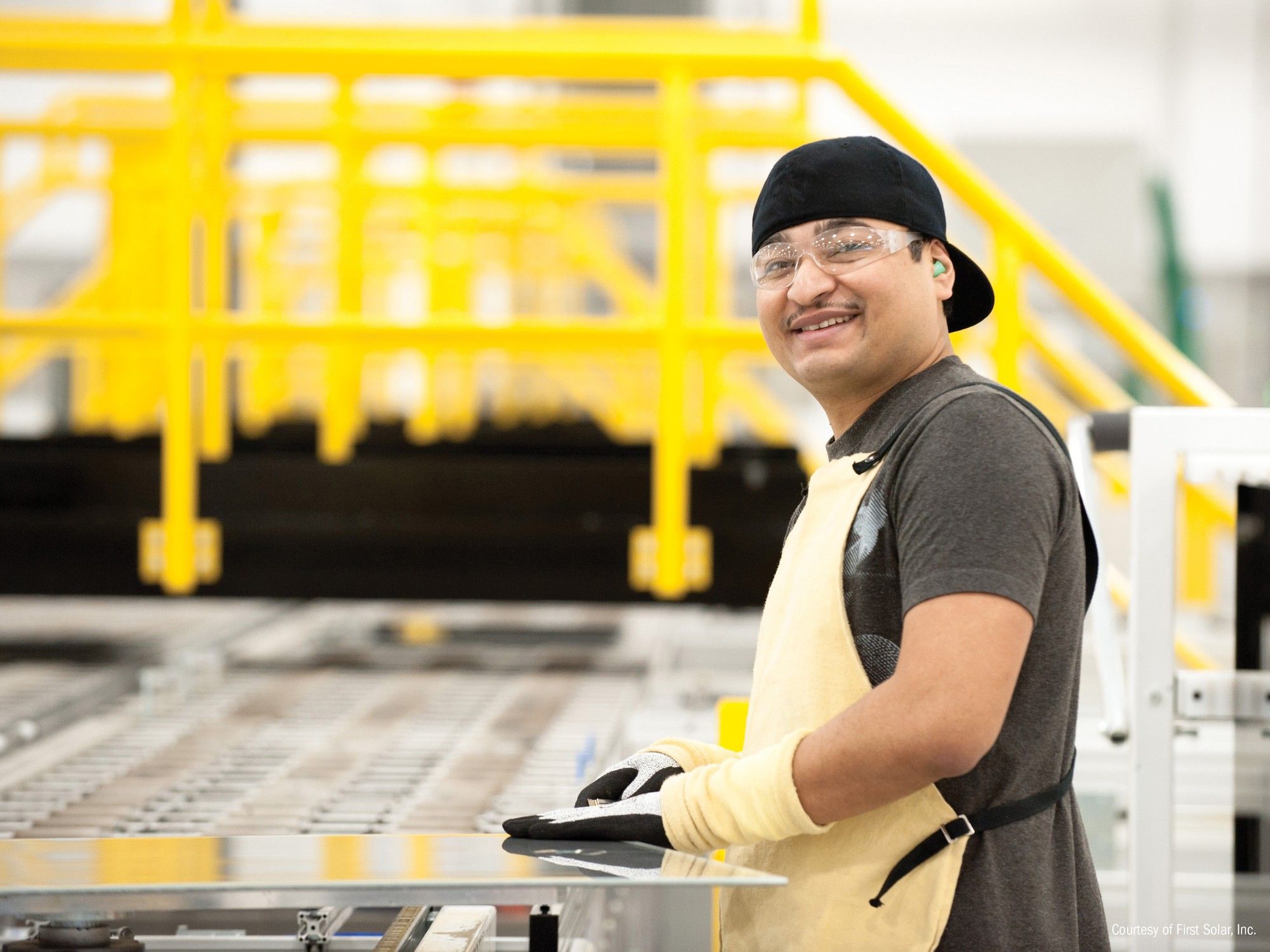 “The Ohio House of Representatives did a great disservice to the people of Ohio,”
said Trish Demeter at the Ohio Environmental Council. “This rushed and sloppy legislation will have untold impacts on electric bills, result in dirtier air, and stifle economic innovation and job growth.”

“Newly published emails confirm the influence of utility and industry lobbyists on 2015’s controversial Energy Mandates Study Committee report, which recommended an extension of the freeze on Ohio’s clean energy standards,” said Dave Anderson, policy and communications manager for the
Energy and Policy Institute. The emails were obtained from state legislators by the Energy and Policy Institute via a public information request, and were not available publicly before now.

“In one August 18, 2015 email addressed to several Republican state policymakers and 10 industry lobbyists, Ohio Senator Bill Seitz suggested that ‘we should be meeting as a small group to figure out what that report is going to say.’ The following month, the Energy Mandates Study Committee that Seitz referenced in his email issued a contentious report that recommended extending the freeze on Ohio’s clean energy standards indefinitely.

“Seitz’s email went to lobbyists for American Electric Power, Dayton Power & Light, Duke Energy, and FirstEnergy, as well to Samuel Randazzo, a lobbyist for the Industrial Energy Users of Ohio and anti-wind attorney.” 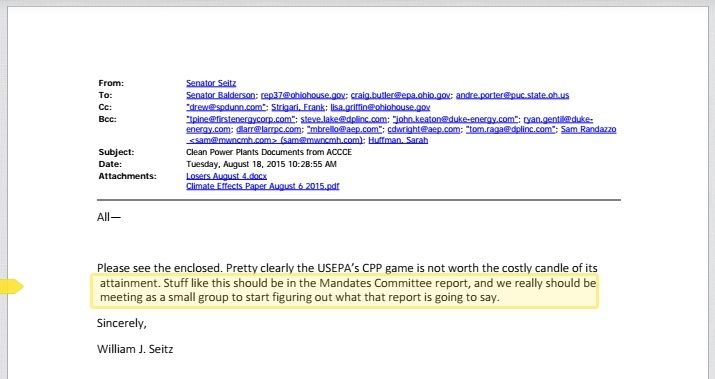 Seitz is a member of the American Legislative Exchange Council (ALEC), the Koch brothers-backed group that supplies corporate-friendly model bills to state legislators. In 2012, ALEC joined with the Heartland Institute, a think tank described by DeSmogBlog as “at the forefront of denying the scientific evidence for man-made climate change,” to write model legislation aimed at repealing renewable energy standards across the country.

Prior to the 2014 freeze on Ohio’s renewable energy portfolio standard, emails show a trail of energy industry lobbyists working with Seitz.

The question now is whether Gov. Kasich will sign or veto HB 554.

Changes to HB 554 are accepted 55-34. It now goes to Gov. Kasich for approval #OhioHouseSession pic.twitter.com/qwP3P1TP8D

In response to a reporter’s question on Nov. 30, Kasich said, “I just would hope the legislature will not have a headline that Ohio went backward on the environment.” But he did not say that he would veto the bill.

During the governor’s aborted presidential campaign, he took an “all sources” approach to energy supply and said that he would approve the Keystone XL pipeline. He also touted his job creation in Ohio without mentioning that many of those came from the clean energy sector. The Environmental Entrepreneurs report numbers Ohio clean energy jobs at 89,000 from 7,200 businesses.

If he does veto HB 554, it’s questionable whether the legislators could override it. Most, but not all, Republicans voted for the bill.

“Today, Ohio lawmakers decided to significantly stall the state’s clean energy efforts, putting politics over economic growth. The governor should continue the leadership he has demonstrated and reject this harmful legislation, so Ohio can get back to work building its clean energy economy, opening the door to well-paying jobs and millions in investment,” Munson said.

“Governor Kasich has an opportunity to show that Ohio’s energy policy is not for sale to utility lobbyists by vetoing HB 554 and unfreezing clean energy in the Buckeye State,” Anderson concluded.