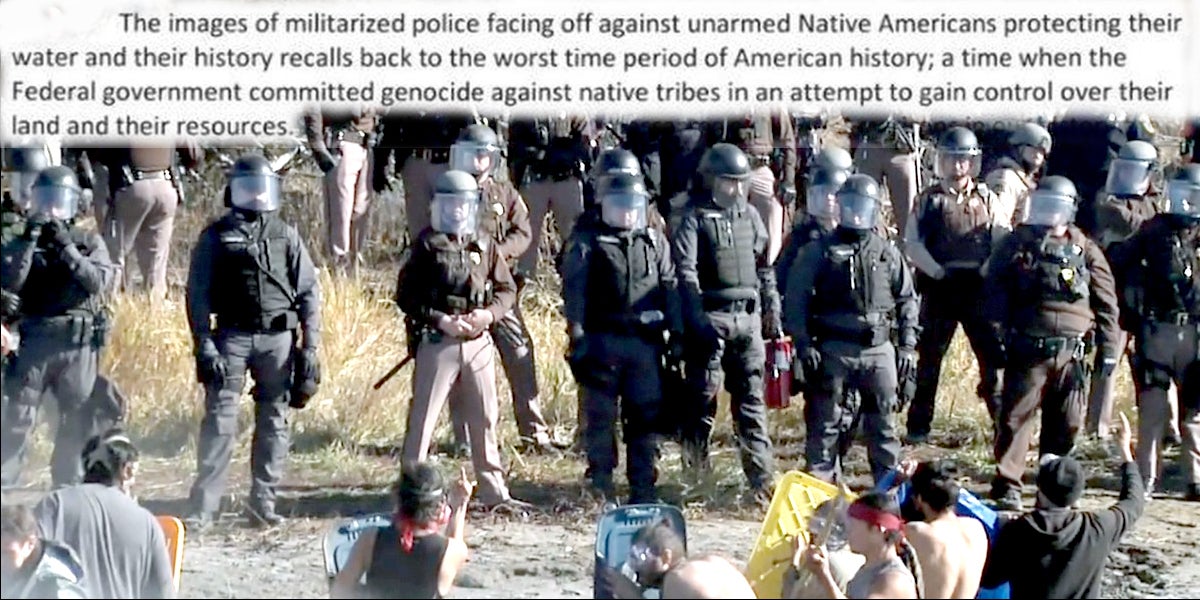 “The images of militarized police facing off against unarmed Native Americans protecting their water and their history recalls back to the worst time period of American history; a time when the Federal government committed genocide against native tribes in an attempt to gain control over their land and their resources,” the letter states.

“As you know, this pipeline was originally routed near Bismarck, ND, but changed after residents of Bismarck opposed the pipeline coming near their homes,” the letter continues. “Instead, the pipeline was routed from mostly white Bismarck, to native lands bordering a reservation. This is a sensitive and delicate situation that Ohio voters have not taken a position on.”

Yes, we were peppersprayed/maced/shot at here at #StandingRock. @EcoWatch shares latest, including my story. #NoDAPL https://t.co/ncG5Um5ADc

The 37 Ohio State Highway Patrol troopers were sent to the Standing Rock protests on Saturday. The letter urges state troopers to come home so they can focus on Ohio issues, such as the heroin epidemic, increased traffic fatalities and other issues that “need greater attention within our state.”

“We are going there to support the people of North Dakota,” Sellers told Cincinnati.com. “More specifically, to provide safety and protect everyone’s rights.”

Besides Ohio, many other states have deployed reinforcements to North Dakota after Gov. Jack Dalrymple
declared a state of emergency surrounding the ongoing protests. Wisconsin, Indiana, South Dakota, Minnesota, Wyoming and Nebraska have all sent personnel, according to an Oct. 23 release from the Morton County Sheriff’s Department.

The protests against the construction of the Dakota Access Pipeline near the Standing Rock Sioux Reservation started in April and has since entered the national conversation. More than 1.6 million Facebook users have “checked in” at the
Standing Rock Indian Reservation page on Facebook to show solidarity with those on the front lines.

Native American communities and their supporters have been battling the construction of the controversial $3.7 billion, 1,168-mile pipeline that will transfer up to 570,00 barrels of crude oil per day from the Bakken oilfield in North Dakota to a refinery near Chicago, crossing the Missouri River less than a mile away from the Standing Rock Reservation.

The people of Standing Rock, often called Sioux, warn that a potential spill into the river would threaten their drinking water, desecrate sacred sites and risk the health of their reservation.

What started off as a peaceful protest has, at times, turned violent. Many
reports have emerged of police cracking down on the protestors, from the releasing of dogs to firing mace. Hundreds of arrests have been made.

Josh Fox, the founder and producing artistic director of the International WOW Company, recorded footage of the protests and wrote, “there were many eyewitnesses to these events, including myself and
Erin Schrode, a 25-year old journalist who recently became the youngest person to run for Congress in California. Erin was shot yesterday by police at point-blank range with rubber bullets.”

This morning, roughly 100 protesters will gather at the Ohio Statehouse in Columbus to deliver a petition to Gov. Kasich, demanding that he recall state troopers from the protest site.

The
Change.org petition has collected more than 30,000 signatures and is one of the fastest-growing environmental campaigns on the site since it was first posted a week ago, a Change.org representative told EcoWatch. 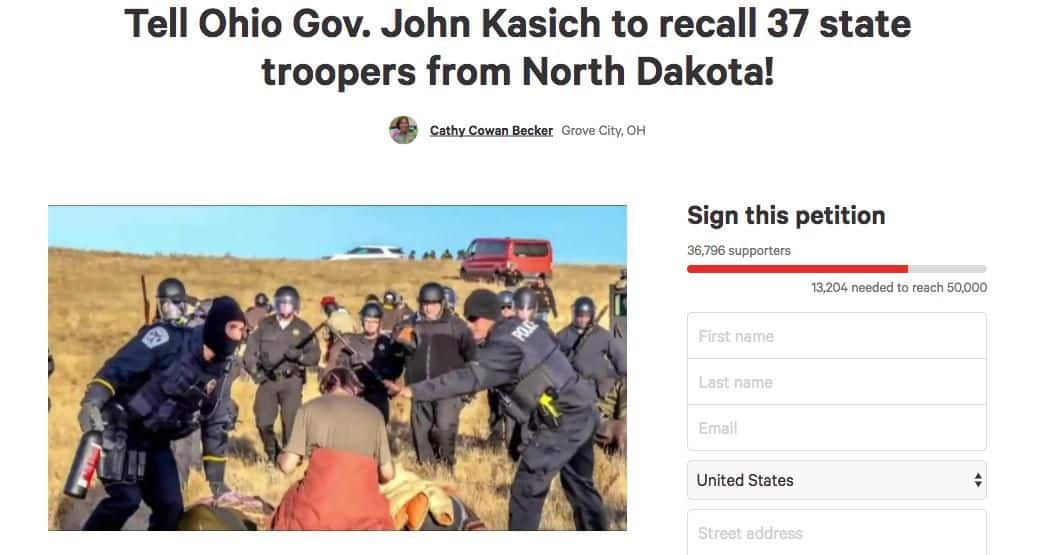 “Ohio taxpayers do not want 37 of their highway patrol officers to participate in this unconstitutional and unethical violation of Native American people’s rights.”Change.org

“Ohio taxpayers do not want 37 of their highway patrol officers to participate in this unconstitutional and unethical violation of Native American people’s rights. We demand that Gov. John Kasich bring these state troopers back home now,” Grove City, Ohio resident Cathy Becker, who started the petition, said.

Becker and other organizers involved in Ohio’s movement against the Dakota Access Pipeline will be speaking at today’s gathering. You can watch the event on
Facebook Live.