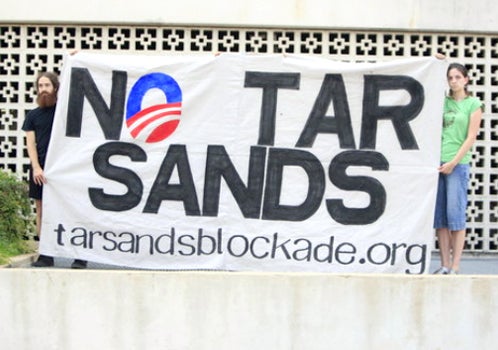 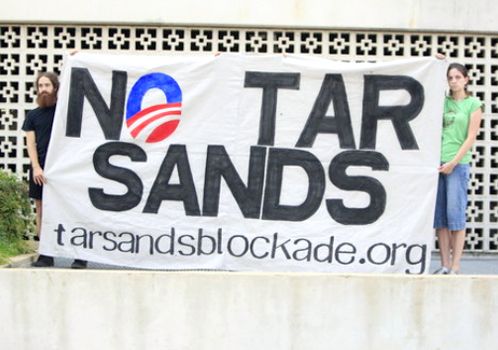 Two years ago today, a tar sands pipeline operated by Enbridge Inc. dumped approximately 1.2 million gallons of raw tar sands, or diluted bitumen (dilbit), into a wetland that overflowed into Michigan’s Kalamazoo River, contaminating nearly 40 miles of the watershed. The spill, which is still being cleaned up today, was the largest and costliest spill in Midwest history.

In the week surrounding the anniversary, citizens across North America are standing in solidarity with their neighbors affected by the Kalamazoo River spill and telling companies, like Enbridge and TransCanada, “We don’t want your dirty tar sands.” The planned actions by local groups will call attention to at-risk communities along the network of existing and proposed tar sands pipeline routes. The geographical diversity brings home the message that a spill like the one in Michigan could occur anywhere.

Susan Connolly, who was directly impacted by the Enbridge spill, is taking part in the Kalamazoo River Walk and had this to say, “My family was directly impacted by the spill. The toxic fumes gave us rashes, nausea and headaches. By taking a stand against tar sands we are fighting for people’s rights and health.” Connolly continued, “Our River will never fully recover, but we can educate the country about the dangers of tar sands and the disastrous impact this type of spill can have so the same thing doesn’t happen to you.”

The nature of diluted tar sands bitumen made the Kalamazoo spill even more devastating than a conventional oil spill. When this toxic, corrosive substance leaks from pipelines, the chemicals separate and the bitumen sinks in water. Tar sands pipelines also operate under high pressure which increases the volume of spills such as in the case with the Kalamazoo tar sands spill.

Diluted bitumen is already worse than conventional crude on its own, but the threat is compounded by the poor safety standards upheld by pipeline operators, as a recent damning report by the United States’ National Transportation Safety Board (NTSB) pointed out. NTSB Chair Deborah Hersman said, “Learning about Enbridge’s poor handling of the rupture, you can’t help but think of the Keystone Kops, referring to the incompetent policemen in silent films. Why didn’t they recognize what was happening? What took so long?” On July 23, National Wildlife Federation released a report, Importing Disaster: The Anatomy of Enbridge’s Once and Future Oil Spills, profiling just how deep the culture of carelessness runs at Enbridge.

Still, powerful companies like Enbridge and TransCanada are drawing up plans to introduce or increase the volume of tar sands through communities in the Pacific Northwest, the Gulf Coast, New England, Ontario, Quebec and British Columbia. And where there are existing pipelines in Canada and the U.S. Midwest, communities are growing concerned about pipeline spills and proposals to bring even more tar sands through their community.

“Increased capacity for tar sands oil is not what we need in the face of dangerous climate change. Tar sands does not fit in the new energy economy and is the wrong direction for America,” said Anthony Swift, an attorney for NRDC’s International Program. “The proliferation of tar sands pipeline projects only means more chances of toxic tar sands oil spills happening more frequently and we certainly don’t want a bunch of bumbling ‘Keystone Kops’ in charge of keeping our drinking water clean.”

More than 24 We Are the Kalamazoo are being held across North America throughout the week, including the kick-off “human oil spill” at the state capitol in Lansing, Mich. that took place on July 18 and a Tar Sands Blockade demonstration coinciding with President Obama’s recent visit to Austin, Texas. Other human oil spills, actions and demonstrations will be held in Vermont, Maine, Delaware, Montana, Nebraska, Oklahoma, Washington state, and Wisconsin in the U.S. and Quebec, British Columbia, and Ontario in Canada, among others.

Activists will also commemorate the anniversary of the Kalamazoo spill at a rally at the annual Conference of New England Governors and Eastern Canadian Premiers to oppose tar sands expansion in Burlington, Vt. starting on July 29. Bill McKibben, founder of 350.org, will be on hand to fight proposed tar sands pipelines in the northeast.

To learn more about We Are the Kalamazoo visit the website and join us for a telepresser today: