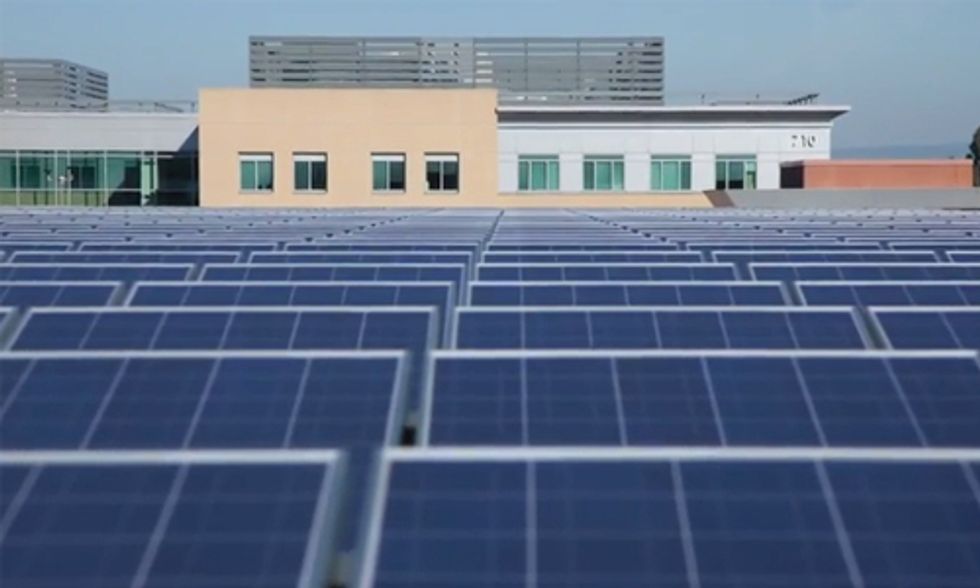 Saying that it was "concerned about climate change and its threat to human health," major health care provider Kaiser Permanente announced yesterday that it's doubling down on its commitment to renewable energy. The Oakland-based company, which runs hospitals and clinics across the country, detailed plans to purchase enough renewable energy to provide for half its energy needs in California and reduce its greenhouse gas emissions nationally by 30 percent.

Kaiser has contracted to purchase electricity from a solar farm, as well as to install solar photovoltaic panels at many of its California facilities. Image credit: Kaiser Permanente

“Climate change isn’t a distant threat," said Kathy Gerwig, Kaiser Permanente’s environmental stewardship officer. “The health impacts of a changing climate can be felt today in the form of increasing rates of asthma and other respiratory ailments, spread of infectious diseases, heat stress and injuries from severe weather events. By addressing climate change for the future, we are improving the health of communities today.”

Kaiser committed to supporting three major projects that will come online in 2016 and generate 590 million kilowatt hours of power a year. First, it has signed an agreement to buy electricity from Golden Hills wind farm at Altamont Pass in Southern California, where Florida-based NextEra Energy is replacing older turbines with new, more efficient ones. That's the same wind farm Google announced last week it would purchase energy from. Both companies signed 20-year deals to support the construction of the project.

Then, it signed another deal with NextEra to buy 110 megawatts from the Blythe solar plant, which is being developed in Riverside County. Finally, it signed a deal with Texas/New Jersey-based NRG Energy to install solar photovoltaic (PV) arrays—both rooftop and ground-mounted—at as many as 170 of its California facilities. NRG will finance, build, own and operate the arrays with Kaiser buying the energy at a fixed cost over 20 years, protecting Kaiser from energy price escalation

"Pursuing renewable energy opportunities is not only the right thing to do for our communities, it makes good business sense,” said Kaiser's chief energy officer Ramé Hemstreet.

But it is definitely the right thing to do, he said.

“The energy we use to run our medical centers and other buildings produces the majority of our greenhouse gas emissions,” said Hemstreet. “Replacing fossil fuels as an energy source with green power is the most important action we can take to address the impacts of climate change on health and to reduce pollutants that can lead to disease.”

In 2012, Kaiser announced its longterm goal to reduce its greenhouse gas emissions by 30 percent by 2020 compared to 2008. The new deals will allow it to meet its goal three years early.

Kaiser registered about 819,000 metric tons of greenhouse gas emissions during its 2008 baseline year across all its facilities nationwide. It is aiming for a reduction of 264,000 metric tons to achieve its target. And with health care-related activities generating eight percent of the greenhouse gases emissions in the U.S., it would like to see others follow its lead. It's partnering with other organizations like Health Care Without Harm and the Business Renewables Center to help move more businesses to clean energy.

"We are working with many partners to influence the marketplace," says Gerwig. "We want to move the entire health care sector to energy that is not causing harm through climate change or air pollution."

Tim Cook: New Solar Farm Will Be Apple's 'Biggest, Boldest and Most Ambitious Project Ever'