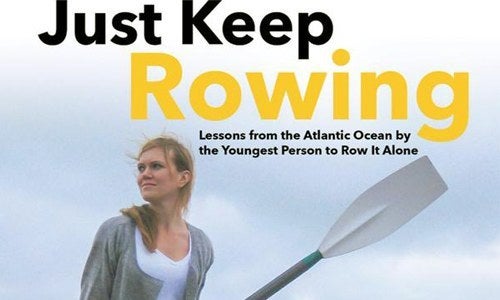 How often have I heard conversations like this at the local coffee shop? One person, let’s call him James, says to his friend while reading the news on his tablet: “More global warming and climate change? When will organizations become responsible?”

Still not done with his exasperation he says, “And look at these water crisis statistics with children dying from diarrhea. The world is drying up and what water we have left is making people sick. What is our government doing?”

I often want to politely suggest that while yes, he is exactly right to be concerned, we should not simply place the burden onto governments or big business to solve it. Indeed, keeping pressure on entities to change their ecologically harmful practices is important, but we all must accept some responsibility, and following that realization, take action.

Confession time. I was once like James, less aware of the global environmental dangers than I should have been, and casually believing that it was not my problem. Let people with power do something, I thought. I have since completely reversed my opinion on this. Sometimes it takes a hard hammer to get my thinking straight. In this case, it took an extreme athlete. How extreme? Well, she was the youngest person to ever row across an ocean entirely alone. I am speaking of Katie Spotz. I said I require big hammers! 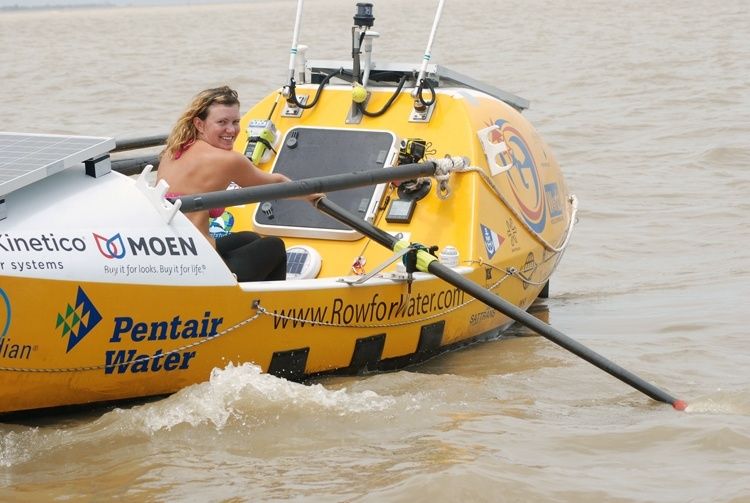 Katie Spotz completed the 3,000 mile, 70 day journey from Africa to South America in 2010, and five years later, she remains the youngest person to have ever accomplished this.

Katie is notable for many reasons, but the cause for our first meeting was to discuss writing a book about her 2010 solo row across the Atlantic Ocean. She completed the 3,000 mile, 70 day journey from Africa to South America in 2010, and five years later, she remains the youngest person to have ever accomplished this. Katie made this journey not only because she excels at extreme challenges. Her goal was to raise funding and awareness about the global water crisis. She has now raised close to $275,000 for charitable projects, and has travelled to Kenya to see her clean water projects in action.

The two of us agreed at our first meeting to team up to write her story, and I am pleased to say the book is now done, and we call it Just Keep Rowing. The official book launch was Sept. 19, in Cleveland, Ohio at the Head of the Cuyahoga Regatta. There were more than 2,000 rowers competing that day, and in our tent near the finish line Katie and I signed books, and also shared information about the global water crisis. 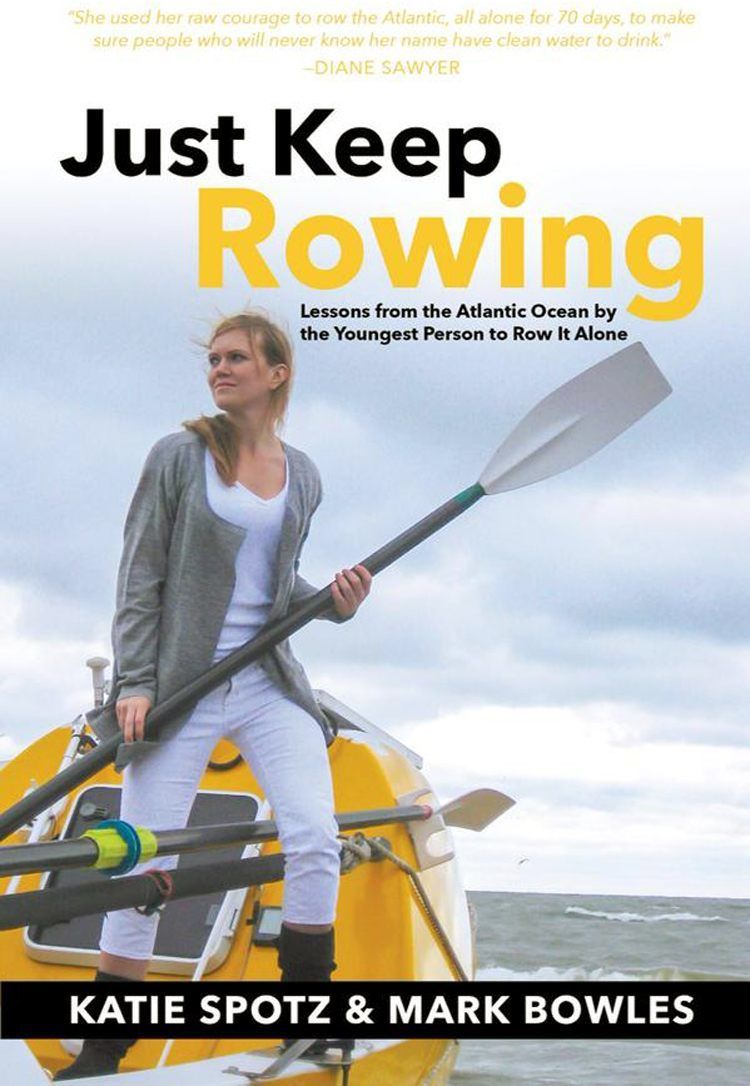 We are donating a portion of the proceeds of our book to the non-profit group, H2O for Life. And we are currently two-thirds of the way towards raising funds for a clean water educational project in the Dominican Republic.

Now let me tell you about our book! Just Keep Rowing is divided into 70 short chapters, each associated with a day that Katie spent on the ocean. We group the days into four main parts. While the ocean rowing narrative is present in all of them, each of the parts emphasizes an essential life-changing idea. The first is to “Propel Yourself.” Here we talk about believing in our human potential and having faith that we can accomplish the impossible. Katie is the example of course, but we all have the inherent capability to grow the confidence we need to propel ourselves towards achieving our goals. Find your ocean and cross it!

We call part two “Russian Roulette,” which is a cryptic title, we know, but it is a harsh image that symbolizes the severe global water crisis. Here we emphasize that awareness and action are essential. With the high prevalence of waterborne disease in developing nations, taking a sip of water becomes much more like playing Russian Roulette than simply quenching a thirst. Water is essential to all of our lives, second only to air. It is also a finite resource, and currently we are not good stewards of our water supply. And that is putting it quite mildly.

In part three, “Our Bioluminescence,” we recount key moments when Katie’s interaction with the Atlantic Ocean fundamentally changed her in terms of seeing the beauty of the world. Ironically, being alone at sea helped her in understanding the intrinsic worth of every human being on this planet. We are all beacons of light, shining like the sun, and as a human race we can only become stronger if we take care of each other. We risk losing the race if we fail to do so. We have the power, within each of us, to make the world a better place.

Each of these three themes represents three weeks of Katie’s life on the Atlantic. The final part, “Climbing the Ladder,” covers her last week. It describes the end of her journey with fire, deadly storms, broken equipment and hundreds of extra miles of rowing before the shores of South America appeared before her. The final challenge was an unexpected ladder from her boat up to the pier. From that moment on, “just keep rowing” and “climbing the ladder” became her metaphors for life and guides for success. 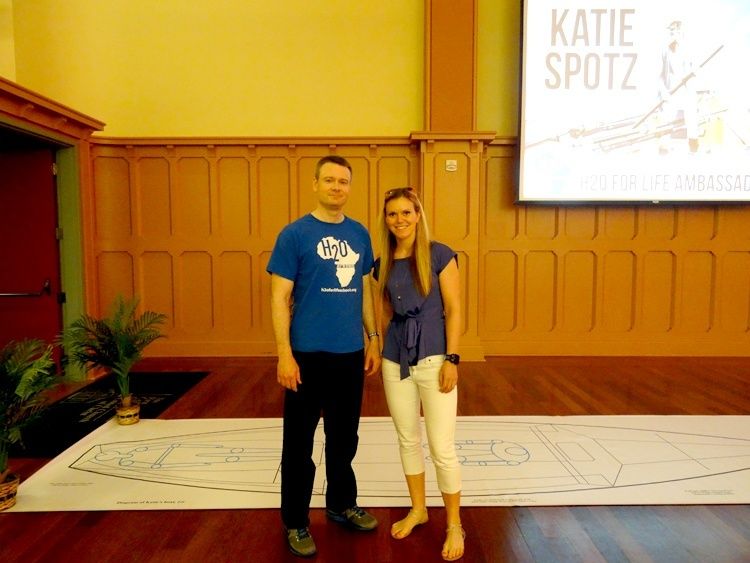 Mark Bowles and Katie Spotz at a local event promoting their book.

Even though our book is published, Katie and I are not done with our collaboration. We have decided to form a company, and we call it One Drop Matters. The mission is to encourage everyone to feel empowered to make a positive change in the world. Big gestures are great, like rowing an ocean. But anyone can make a difference. Even a child.

Let me put on my bragging father hat for a moment. After hearing me talk (incessantly) about my work with Katie, my three daughters, Isabelle (age 15), and twins Emma and Sarah (age 6), decided to have a lemonade stand this past summer. Though they planned to raise one million dollars, they settled for $111, and they donated all of the profits to H2O for Life.

Seeing the pride in their faces, I realized one drop matters in more ways than one. While they raised a small amount of money, a flame to see the world outside themselves ignited. Like pebbles dropped onto a calm lake, their ripples of impact will hopefully continue throughout their lives.

We believe that Mother Teresa best articulated the message that drives our company. She said, “We ourselves feel that what we are doing is just a drop in the ocean. But the ocean would be less because of that missing drop.” A single drop of water has the power to create great change. And at the same time, our water is in grave danger. Katie and I simply suggest that we all Just Keep Rowing to promote the health and preserve the resources of our planet.

Mark Bowles, Ph.D. is a professor of history at American Military University and co-founder of One Drop Matters. You can learn more about Katie and Mark’s book at JustKeepRowing.com.

Cleveland: A Green City on a Blue Lake