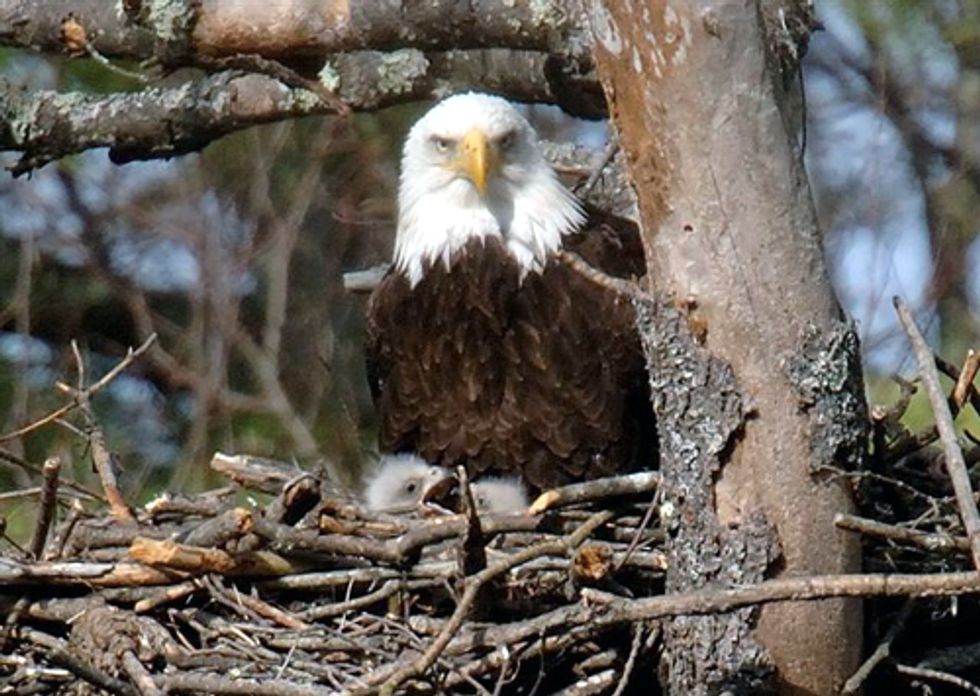 This bald eagle is one of many that live in the Upper Delaware National Scenic and Recreational River that will be at risk if natural gas drilling is allowed in the park. Photo courtesy of the National Park Service.

The U.S. District Court in Brooklyn, New York ruled that a lawsuit against the Army Corps of Engineers (Corps) and the Delaware River Basin Commission (DRBC) is not ready for judicial review. The lawsuit was filed on Aug. 3, 2011 by a coalition including the National Parks Conservation Association (NPCA), Hudson Riverkeeper and Delaware Riverkeeper Network against the Corps and the DRBC for their failure to comply with federal law by proposing gas drilling regulations without first conducting a full environmental review as required under the National Environmental Policy Act (NEPA). The coalition is represented by attorneys from each organization and the Columbia Environmental Law Clinic.

“While we are disappointed that the court has decided for now not to rule on the merits of our case, we remain fully committed to ensuring our national parks on the Delaware River are protected for our children and grandchildren to enjoy,” said Cinda Waldbuesser, Pennsylvania senior program nanager for NPCA.

“We will continue to urge the DRBC to take the reasonable and rational step of fully analyzing how proposed regulations will affect the region’s quality of life before allowing activities that could jeopardize our national parks.”

National parks at immediate risk include the Upper Delaware National Scenic and Recreational River and Delaware Water Gap National Recreation Area, which are among the top ten most-visited national parks in the country and offer outstanding water quality and recreational opportunities.

"The judge's decision recognized and validated the tremendous concerns over threatened gas drilling for the Delaware River, our organizations and communities—that he found he could not render a final judicial opinion at this time does not diminish his acknowledgement that gas drilling is a major threat to this region, and that the actions of the agencies involved should be the subject of judicial review," said Maya van Rossum, the Delaware Riverkeeper.

"Of great importance, the judge did not side with agency efforts to simply and cavalierly set aside the role of the courts or the public in reviewing what the agencies are up to on this precedent setting matter."

“Riverkeeper is disappointed that the court concluded it was premature to decide whether DRBC and the Army Corps are required to conduct an environmental review of its proposed gas drilling regulations before finalizing them,” said Kate Hudson, Hudson Riverkeeper watershed program director.

“However, we are pleased that the court’s decision allows Riverkeeper to challenge these regulations if and when DRBC ends the moratorium and votes to put the regulations in place. The court emphasized that it is available and more than capable of stopping well development before any fracking wastewater is created if DRBC proceeds in a manner contrary to the law. Riverkeeper fully intends to sue again and ask the court to take such action if DRBC puts at risk the drinking water for millions of New Yorkers by opening the Delaware River Basin to drilling without completing a full environmental review.”

In 2010, the DRBC, an agency that includes the governors of New York, New Jersey, Pennsylvania, and Delaware and the Army Corps of Engineers, proposed new regulations for natural gas development without first conducting an environmental impact analysis. The regulations, according to the court documents, neglected to provide sufficient protections for local communities, the environment and nearby national parks. The coalition’s lawsuit alleged that as federal agencies, the Army Corps and DRBC must comply with the NEPA and analyze and inform the public of the environmental impacts of proposed gas drilling regulations as part of their decision-making process. Yesterday, the court ruled that the lawsuit was not ripe, but that if the DRBC takes final action on the regulations, the coalition is authorized to refile the lawsuit.

Covering approximately 48,000 square miles, the geological formation called the Marcellus Shale occurs beneath the states of New York, Pennsylvania, Ohio, Maryland, Virginia, West Virginia and Tennessee. Nearly 36 percent of the Delaware River Watershed is underlain by Marcellus Shale. Based on industrial and academic estimates that trillions of cubic feet of natural gas are theoretically recoverable from the formation, more than 30,000 and as many as 60,000 natural gas wells are anticipated in the Delaware River Basin alone and the impacts to water quality and quantity, air quality, recreation and the wildlife within and near treasured lands could be severe.

Regulations on gas drilling in the basin are not expected to be proposed at any point in the near future. The coalition will continue working to ensure the necessary protections are in place for the Delaware River Basin and that the DRBC conducts the required environmental reviews before considering adoption of drilling regulations.