The Iconic Joshua Tree Is in Trouble 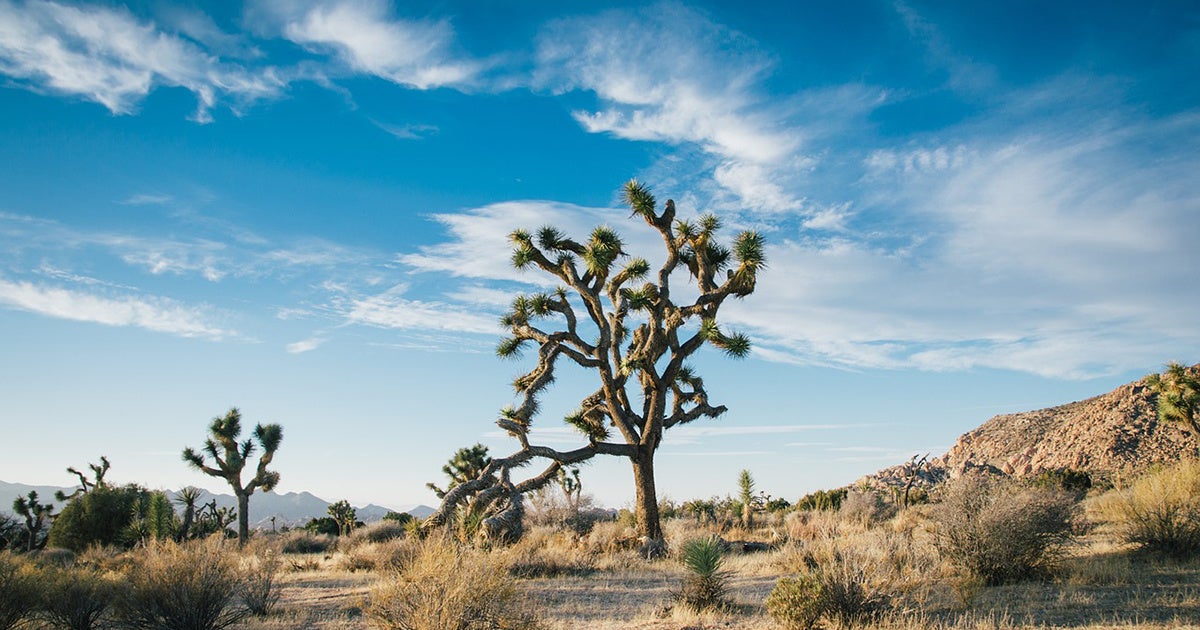 Botanist Lynn Sweet regularly treks through California’s Joshua Tree National Park, nearly 800,000 acres that lie at the intersection of the Mojave and Colorado deserts. She likes to photograph the gnarly, spikey-limbed trees, which look — as some have observed — like a picture from a Dr. Seuss children’s book.

Much as many of the park’s million or more yearly tourists do, she marvels at their strange beauty. “They have an amazing shape,” she said. She said they don’t bloom every year, but when they do it’s very special. “This year, the plants flowered earlier than most people had ever seen. Some plants started flowering in November, and then the number of trees in flower increased until springtime, when nearly every tree was in flower. It was incredible,” she said.

The trees, legend has it, were named after the Biblical figure Joshua by 19th century Mormons who thought their upwardly outstretched limbs resembled arms raised in prayer. The trees have been around since the Pleistocene, which began more than 2 million years ago and concluded at the end of the last ice age. Woolly mammoths, mastodons, giant cave bears and saber-toothed tigers roamed among them. The animals are long gone, but these iconic trees still exist.

But scientists like Sweet fear they might not be here much longer if climate change continues unabated. For many Joshua trees, this century could be their last. They’ve managed to tolerate the assaults of prehistoric times, only to fall prey to industrial advances that are now heating up the planet. 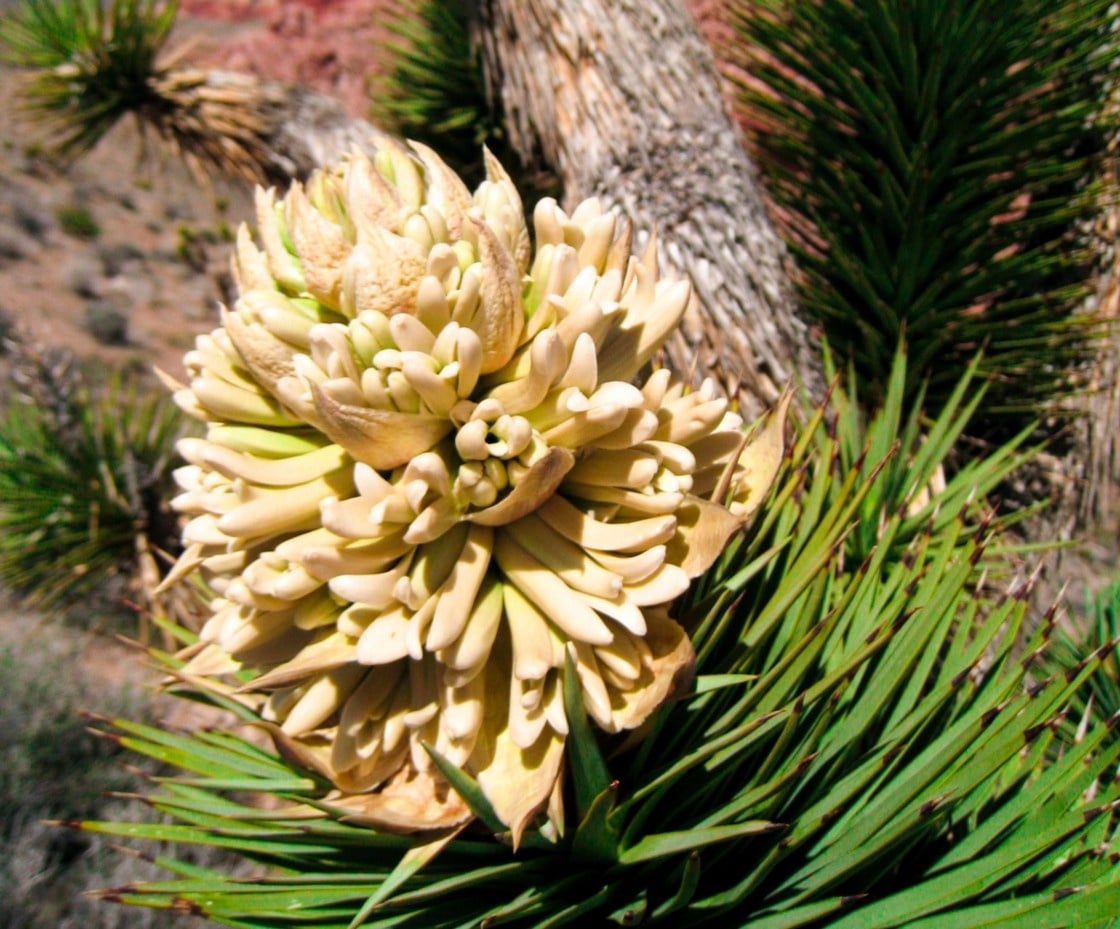 “Whereas shifts in the past may have been major — such as during the Pleistocene — the current shifts are very rapid,” Sweet said. The temperatures are rising so fast, that Joshua trees are little able to migrate to cooler areas. Additionally the species, “now has barriers, such as roads and development to move across,” she said.

Sweet, a plant ecologist at the University of California Riverside’s Center for Conservation Biology, partnering with the Earthwatch Institute, enlisted volunteers to help collect data on about 4,000 trees in the park to determine whether climate change already has had an impact. She mapped out where Joshua trees live in the park to determine which conditions they do best in, and then compared that with projections of what Joshua Tree National Park will like look later this century. 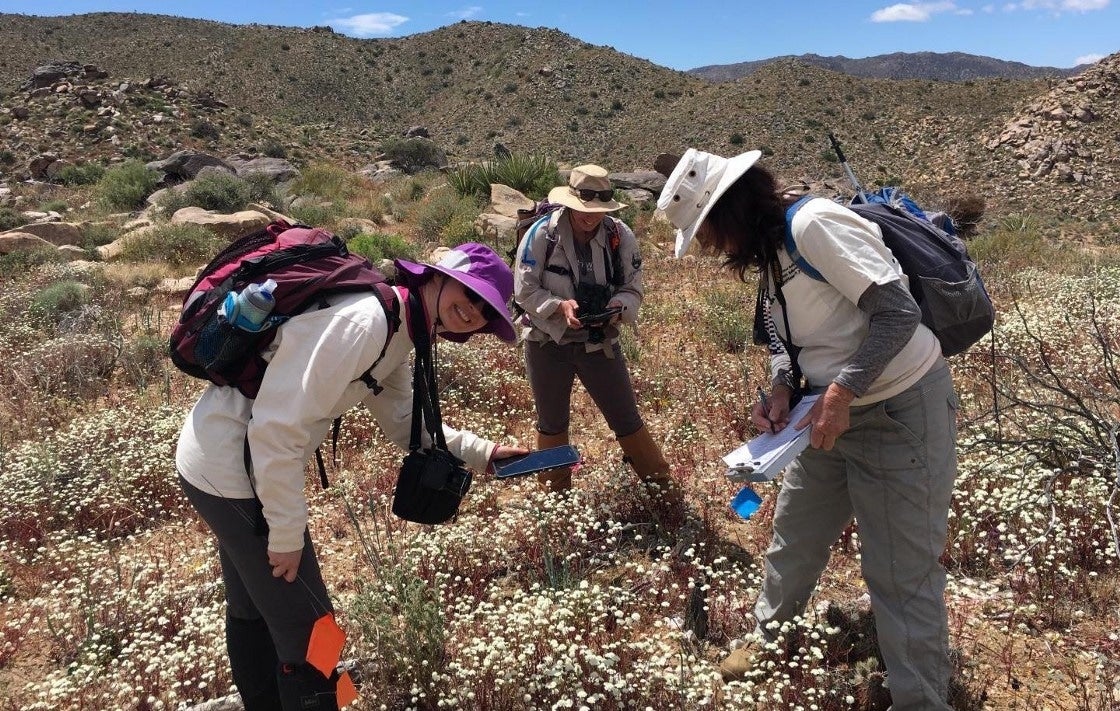 Her calculations suggest that addressing climate change could save 19 percent of the trees after 2070. If nothing is done, however, the park likely only would keep a scant 0.02 percent. The study appears in the journal Ecosphere.

The work builds upon an earlier study in 2012, also by UC Riverside researchers, which found the trees would begin to vanish if temperatures rose 3 degrees C. The newest study considered additional factors, such as soil moisture estimates and precipitation, among others.

The trees already have begun drifting to higher areas in the park, where they might escape the heat and have a better chance at producing younger plants, she said. In hot areas, however, tress reproduce less — and those that do are dying, the study said. Older trees, which can live as long as 300 years, can store large amounts of water, which helps them cope with drought. But younger trees lack this capacity, and are less likely to survive. 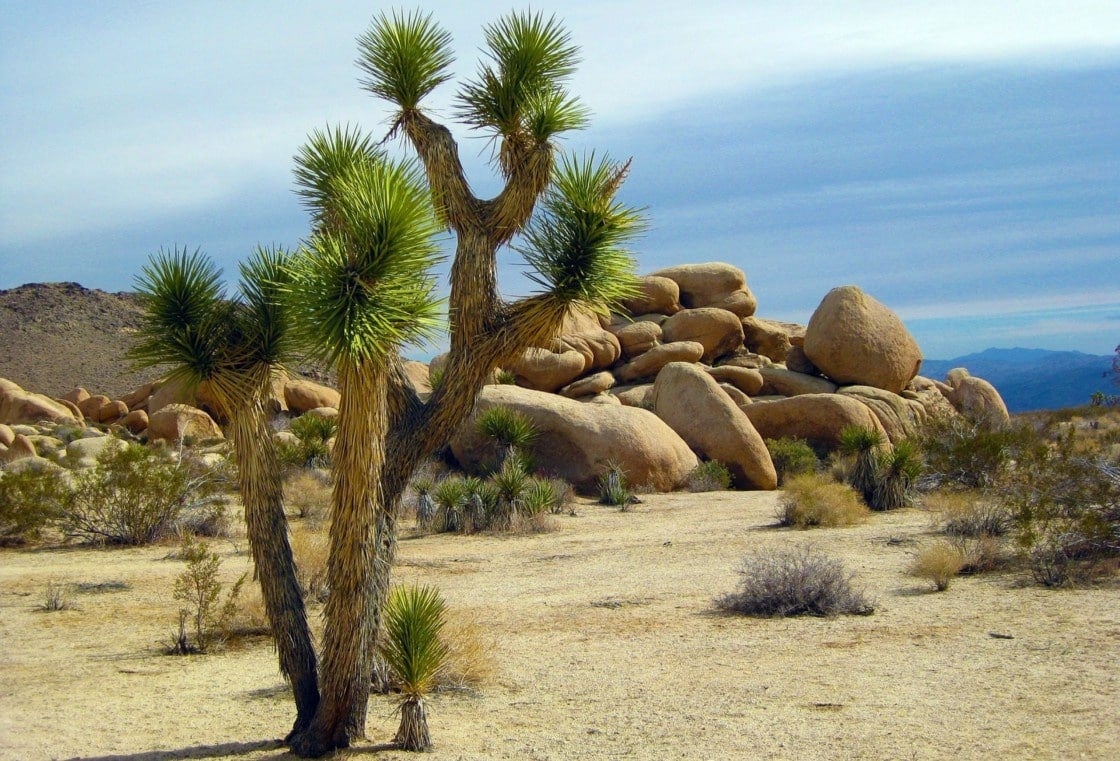 Prolonged droughts make things difficult for animals and plants that need water, prompting many species to relocate to areas that are more hospitable, often cooler, wetter and higher. “For the Joshua tree, on broad, flat areas, this is like outrunning a very wide flash flood,” Sweet said. “Over flat ground, great distances are involved to escape the threat of hotter, drier temperatures. Moving upslope to where it’s cooler is another way to escape the heat, but these areas may or may not be suitable to the root system or growth of the Joshua tree.”

The tree is also missing a key ally that previously helped it migrate to new areas. “The Joshua tree is pretty tough,” she said. “It is built to survive and persist through droughts. In the past, the species as a whole was able to migrate distances using its likely primary disperser, the Shasta ground sloth. Since this species is [now] extinct, the tree can no longer migrate great distances. This is a problem with this new, more rapid shift in climate.”

Also, the trees in the western Mojave differ from those further to the east in Utah and Nevada, facing special challenges, Sweet said. “Joshua trees have a particular pollinator and only this insect, a yucca moth, can pollinate them,” she said. “The relationship is thus really special — there is benefit for both the insect and the moth in the relationship. The moth gets food for its larvae, and the Joshua tree is able to get pollen moved from tree to tree. No other insect can do this. Thus, though common, it’s really a fragile existence. If climate change affects the moth in a different way than the tree, we may be in trouble.” 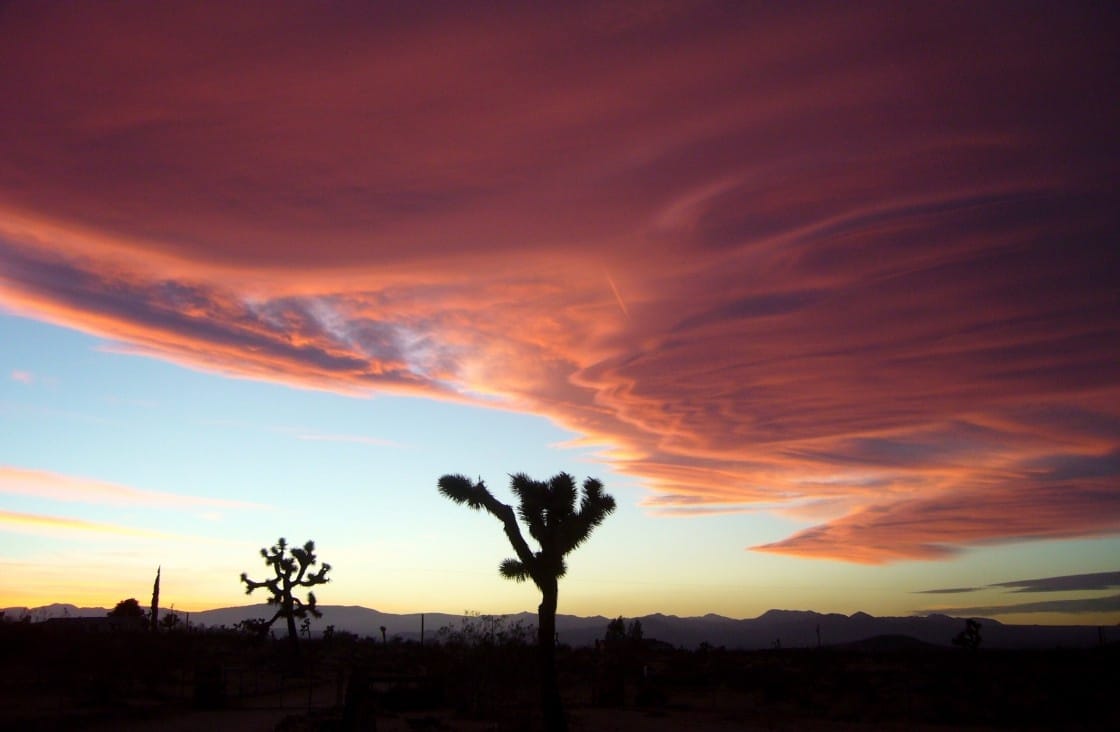 Pink clouds over the Mjoave desert.

The study also found that wildfires pose an additional hazard, as invasive plants and shrubs — fueled by smog and car exhaust — serve as kindling for the blazes. The scientists said that the U.S. Park Service — also a partner in the work — has been trying to reduce the danger by eliminating many of the plants.

As a park visitor, Sweet continues to find the trees inspiring. “I really enjoy watching wildlife use the trees,” she said. “I’ve spent time watching Orioles move in and out of nests on the trees. I’ve seen spiny lizards darting up and down the trunks. It’s just such an important structure in the habitat. It’s not a shy tree. It’s the most noticeable component of the [park] and the Mojave.”

But as a scientist, she believes that only aggressive climate mitigation can save them. “Changes are already occurring on the landscape in terms of where the new trees are occurring, and this supports the predictions about future changes,” she said. “We know things may get worse. The degree to which this happens depends on human action.”