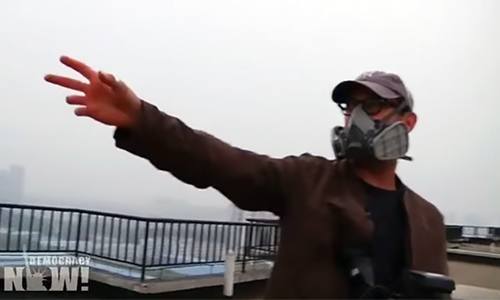 As 2015 goes down as the world’s hottest year on record and the East Coast continues to dig out from one of its worst snowstorms in history, we look at the new documentary by Josh Fox. In How to Let Go of the World (And Love All the Things Climate Can’t Change) Fox travels the globe, from New York City to the Marshall Islands and China, to follow the struggles of communities fighting the impacts of climate change.

In one scene, a group of Pacific Climate Warriors chant, “We are not drowning, we are fighting.” Fox’s new film premiered at the Sundance Film Festival and airs on HBO this summer. His other films include Gasland, the documentary which first exposed the harms of the fracking industry and was nominated for an Academy Award.

Amy Goodman: We’re broadcasting from the Sundance Film Festival in Park City, Utah. The death toll from a record-breaking snowstorm that pummeled the Eastern Seaboard has risen to more than 40. In Washington, DC, federal government offices remain closed again today. The House of Representatives has postponed all votes this week. Snowstorm Jonas was the single biggest snowstorm on record for at least six locations across the East Coast, including Baltimore, Maryland and Harrisburg, Pennsylvania. The highest total snowfall recorded was 42 inches—or three-and-a-half feet—in Glengary, West Virginia. The Weather Channel’s lead meteorologist, Michael Palmer, said, “It’s likely to go down as one of the most impressive blizzards we’ve seen on the Eastern Seaboard in recorded history.”

The record snowstorm in the U.S. came as parts of Asia also experienced record-cold weather. Hong Kong experienced its coldest day in 60 years Sunday. Islands across Japan also experienced their coldest days in decades, with one island, Amami Oshima, receiving snow for the first time in 115 years. In Vietnam, farmers are grappling with the coldest winter in more than 40 years.

Meanwhile, a new study suggests warmer water temperatures are causing the seas to expand twice as fast as previously thought, leading to greater sea level rise. The study in the peer-reviewed Proceedings of the National Academy of Sciences also found sea level rise varied by location, with the Philippines experiencing sea level rise at five times the average global rate.

Well, we turn now to a new film that’s premiered at Sundance—it’s on climate change—from Josh Fox, director of the Academy Award-nominated film Gasland, which exposed the dangers of fracking. This new film is called How to Let Go of the World and Love All the Things Climate Can’t Change.

Josh Fox: Can a person stop a wave? Could you stand on the shore and stop a wave from crashing? What are the things that climate change can’t destroy? What are those parts of us that are so deep that no storm can take them away?

Amy Goodman: That’s the trailer for Josh Fox’s new film, How to Let Go of the World (And Love All the Things Climate Can’t Change). Josh Fox joins us here in Park City, Utah.

We welcome you to Democracy Now!

Amy Goodman: Hey, Josh. It’s great to be with you. So talk about your travels around the world for the last three years.

Josh Fox: Well, this film starts with me in my own backyard having won against the fracking industry—well, not just me, but all the movement—and realizing that even though we could—

Amy Goodman: How did you win?

Josh Fox Well, through a whole lot of creative protest, the threat of civil disobedience en masse, educating the Delaware River Basin Commission about how dangerous and contaminating the fracking process is. And since that’s the watershed for 16 million people, finally, after years and years of campaigning, they relented and took the river basin off the table. So that was a huge victory. As many people watched in Gasland, the fear was that the watershed would start to get drilled.

But then realizing, as I see the ecosystem collapse under the weight of climate change, the hemlock forests being eaten by a parasite that’s advancing because the temperatures are warming, that we could lose everything in our region to climate change and then, just a few months later, New York City getting the same wake-up call with Hurricane Sandy, that these extreme weather events will continue to get worse, as you’re seeing with this incredible, crazy snowstorm, only a few weeks after we had 60-degree temperatures on Christmas. The extremes of weather—

Amy Goodman: And the effect of this snowstorm?

Josh Fox: Yeah and the extremes of weather change with climate, right? So, that led me to a real discovery that we are so late in this game. We’ve already warmed the Earth by one degree. We have another 0.5 degrees already in the pipeline. And at two degrees warming, we’re talking about five to nine meters of sea level rise being engendered. That is lethal for New York City. That’s a—and Philadelphia and Washington, DC, Boston, Florida, San Francisco. So, looking at this from the perspective it’s already so late in the game—many would say too late to avoid some of the most destructive aspects of climate change—that sent me out on the road from this place of really deep despair to find all the things climate can’t change.

And what those are, are civic virtues, courage, democracy, love, human rights, resilience, creativity, innovation. And so that led me all across the world to six continents, 12 countries and places like the Amazon with indigenous environmental monitors or the Pacific Climate Warriors who are blockading the coal ports in Australia to stop their islands from being submerged by sea level rise, people speaking out in China for human rights and against climate change, at peril of being imprisoned. So these were the things that are incredibly emotional, in some cases spiritual, ethical examples of people who never say die, who are the most inspiring individuals I’ve ever met—a couple of them sitting right next to me here on this show, which I’m so excited to hear what they have to say. But that as late as it is, we have to inspire within ourselves a sense of generosity, community, these civic virtues that we’re going to need if we’re going to win any of these climate battles, but we’re going to need them even more if we start losing.

Amy Goodman: Well, Josh, before we go to our other guests in studio, climate activists from around this country, I want to turn to a clip from How to Let Go of the World (And Love All the Things Climate Can’t Change), where that group of Pacific Islanders you describe, from nations including the Marshall Islands, Fiji, Vanuatu, the Solomon Islands, set out in hand-carved canoes to blockade one of the world’s largest coal ports in Newcastle, Australia. This clip is narrated by Josh Fox. It begins with the Pacific Climate Warriors chanting, “We are not drowning, we are fighting.”

Josh Fox: Before I say anything else about this sequence, you should probably know that the downside of what we’re about to do was, you know—this is the short list: drowning, arrest, run over by boats, all kinds of sharks, jellyfish, getting punched, sea creatures, drifting away in currents out into the Pacific Ocean, cultural disrespect, big waves. Well, you get the idea. I’ll just say, this was the closest I’ve ever been to feeling like I was in that last scene in Star Wars. We didn’t know what would happen, but a massive coal tanker entered the port, to be greeted by seven hand-carved canoes from the Pacific Island nations and by dozens of Australian kayaking protesters flooding the channel. Nothing like this had ever happened before, tiny canoes like little X-wing fighters up against the Death Star, Australian police swarming in jet skis, intentionally trying to capsize boaters. The first confrontation was upon us: A huge coal ship was leaving port.

I mean, this is amazing. This has actually worked. They’ve actually stopped the coal ship.

I can’t really describe the feeling of watching people in hand-carved canoes, threatened to be sucked under by giant tugboats pulling these ships out to sea. It was true bravery.

Amy Goodman: A clip from Josh Fox’s new film, How to Let Go of the World and Love All the Things Climate Can’t Change. Josh?

Josh Fox: “We are not drowning, we are fighting.” This could be an anthem for New Yorkers, for Philadelphians, for people in San Francisco. And I think a lot of times when you talk about climate change, you don’t know how to fight. But what we’re going to do with this film, before it goes on HBO in the summertime, is tour it all across America to a hundred of the hotspots, like you see in the Port of Newcastle, but in America, where people are fighting pipelines and power plants, compressor stations, LNG terminals, mountaintop removal, fracking, tar sands—all the places where the fossil fuel industry is invading America. That’s called the Let Go and Love Tour, where we work directly with communities to provide them with renewable energy alternatives on the ground and also mobilize. So, you can learn more about that at our Facebook page or we actually are running a Kickstarter campaign to help us get all across America.

Amy Goodman: … the 100-city tour and about the activism that our guests today are involved with, whether we’re talking about the connections between—well, how climate change affects people differently depending on their socioeconomic status or learning about people, environmentalists on trial and what’s happening to them in this country. We’ll be joined by Aria Doe and Tim DeChristopher in addition to filmmaker Josh Fox in a minute.