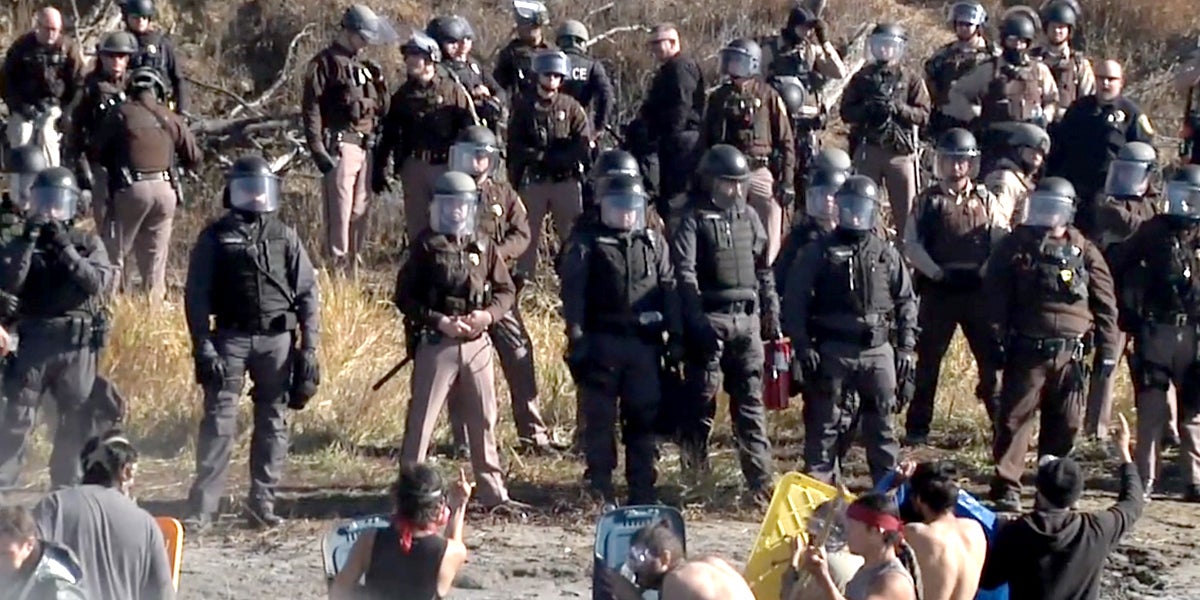 Police
violently cracked down on a peaceful protest led by the Standing Rock Sioux against the Dakota Access Pipeline Wednesday in Cannonball, North Dakota, firing mace, pepper spray and rubber bullets at point-blank range at “water protectors” standing and praying harmlessly in the water.

There were many eyewitnesses to these events, including myself and
Erin Schrode, a 25-year old journalist who recently became the youngest person to run for Congress in California. Erin was shot yesterday by police at point-blank range with rubber bullets.

Here’s my video footage from yesterday:

We witnessed a very brutal police repression of a very peaceful protest. A line of about 300 peaceful water protectors standing in river water up to their waists, were confronted by about 100 police with shotguns, riot gear, mace and pepper spray. I have never seen anything like it. It was like witnessing Gandhi’s Salt March, then suddenly I am watching people being maced, and I hear a pop and see that they shot Erin with a rubber bullet. How is it possible that from 10 feet away, they are shooting at peaceful protesters, journalists, bystanders, medics?

Erin posted a statement about her experience on Facebook:

We’re told that people were dragged from their sweat lodges and prayer circles, their peace pipes broken, thrown into chain link fence enclosures like dog kennels, and numbers put on their arms. It’s dehumanizing and unconstitutional. You cannot have a legitimate government that defends an oil company on treaty land against its own people and shoots at them with rubber bullets and maces them in the face, when the people are simply saying, we are here to pray, we are here to be in our own watershed.

This is an emergency situation. Not only do we need more people to come here, but we also need our government to step up. President Obama
said, wait two to three more weeks and then they’ll make a decision about moving the pipeline route. That’s insane. People are being hurt today, civil liberties are getting trampled today, and the kids and elders who are getting arrested are being given harsh felony sentences, and could get locked up for a decade. The president needs to act now.