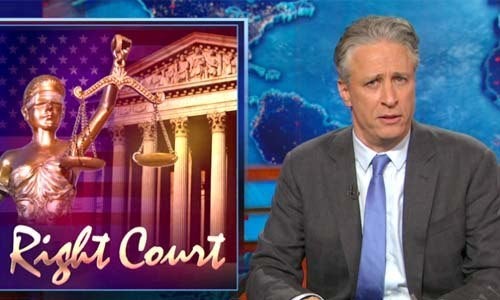 The Supreme Court has been handing down some significant decisions in the last week. Justices ruled in favor of the Affordable Care Act and same-sex marriage and provided hope for proponents of gerrymandering.

They also ruled in favor of Oklahoma’s controversial lethal injection drug and against the U.S. Environmental Protection Agency (EPA), putting roadblocks on its ability to regulate health-damaging pollutants from power plants.

On The Daily Show, Jon Stewart shows clips of conservative pundits lamenting the “Obamacare” and gay marriage rulings and chalking up the lethal injection and EPA rulings as victories for conservatives, which wholeheartedly confuses Stewart.

Fox News, in particular, celebrated the EPA defeat as a “victory for business.” “You seem really giddy about that victory,” says Stewart. “You know the losing team in that game was lungs. You know that, right?”

Stewart turns to his senior correspondent Jason Klepper to bring some clarity to the discussion.

“After a week of redefining what marriage is and doling out health care, the Supreme Court has finally brought justice back to America. Remember America?, Klepper asks rhetorically. “A place where big business always wins, where it’s a little hard to breathe and where we get to decide how super painful to make your death. I mean that’s the country I’m proud to fly my confederate flag over,” says Klepper.

Watch the full segment which is broken up into two parts here: