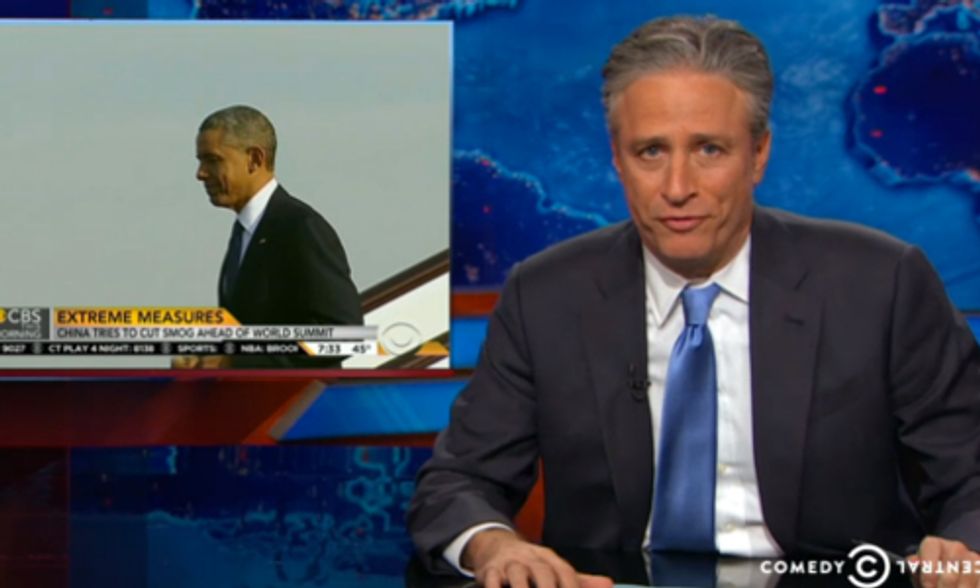 As world leaders gathered in Beijing for the Asian Pacific Economic Cooperation (APEC) conference, the city took aggressive measures to clean up its notoriously smoggy air for the occasion, ordering schools, offices and factories to shut down and giving Beijing residents a rare opportunity to see the sun.

The Daily Show host Jon Stewart had a few things to say about that.

"It takes me back," he false-reminisced. "I'll never forget when I was growing up in China and we used to sit around the radio listening in the morning and hoping we would get out of school for an 'air day.'"

Referring to a CBS news report that said of APEC, "Climate change is on the agenda and a Chinese government official said good air quality is the priority of priorities."

"They think that's what he said," commented Stewart. "It was difficult to hear the official say that through the curtain of sound-dampening smog that passes for air in Beijing."

Stewart cited an editorial in the China Daily headlined "Clear air should be forever" that said "Bejiing residents will no doubt feel uneasy when the city is once again smothered in smog after the APEC meeting but they will get used to it as they did before."

"That must be the worst city slogan ever," he quips. "Welcome to Beijing. You will get used to it as you did before."

On the other hand, given the historic agreement on climate change just announced by President Obama and Chinese President Xi, Beijing residents may have to get used to seeing the sun occasionally.