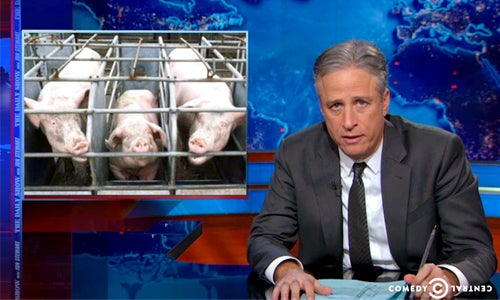 New Jersey Republican Governor Chris Christie vetoed a bill last Friday that would have banned gestation crates for pregnant pigs. The bill would have directed the New Jersey Board of Agriculture to adopt regulations concerning confinement of pregnant sows during gestation, “prohibiting the confinement, in an enclosure, of any sow during gestation in a manner that prevents the sow from turning around freely, lying down, standing up or fully extending the limbs of the animal.”

The bill passed the New Jersey State Assembly 53-13, the New Jersey State Senate 32-1 and was favored by 93 percent of New Jerseyans. “There is literally nothing else in the state that gets that kind of support,” said Jon Stewart in last night’s The Daily Show. “Going for cheese steaks down the shore with Bruce Springsteen, only 86 percent.”

Watch here as Stewart is in perfect form showing the absurdity of Christie’s veto of the bill.