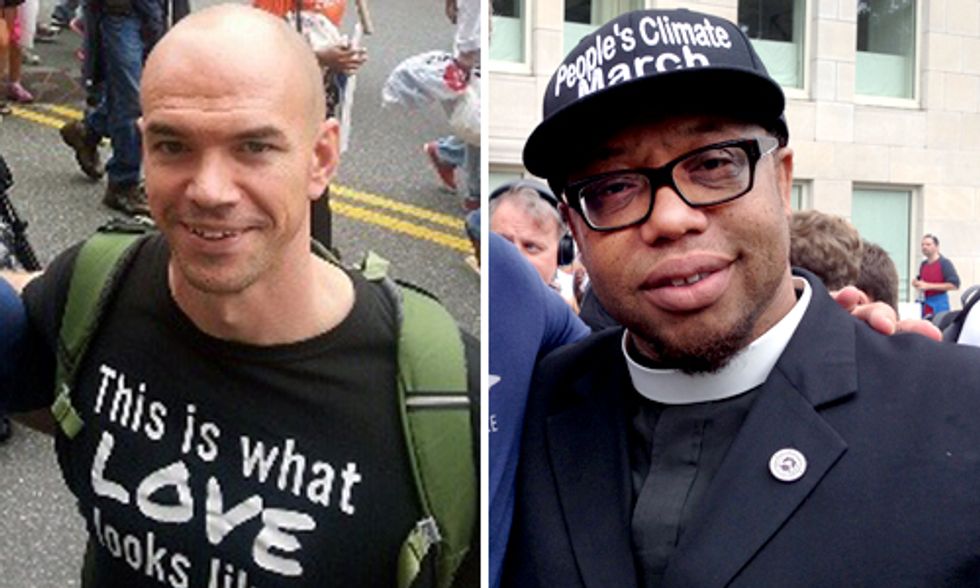 After the historic and inspiring People's Climate March and Flood Wall Street actions showed the potential of our growing movement, discussion is taking place about how to put that power into action. The power demonstrated on the streets of New York was a signal that we are big enough and strong enough to take our government out of the grip of the fossil fuel industry. Without question we need to step it up and organize campaigns and actions that are at the scale and boldness needed, including multi-day direct action at specific targets.

The Great March for Climate Action will arrive in Washington, DC on Nov. 1 after marching 3,000 miles from Los Angeles. Photo credit: Stefanie Spear

We are writing to urge participation by as many people as possible in one such initiative: a week-long series of confrontational activities in Washington, DC, Nov. 1-7—Beyond Extreme Energy.

By taking these actions during election week, we will be sending a message to both parties in Washington that supporting extreme energy extraction is no longer the path of least political resistance. We recognize that party loyalty is incompatible with political power for a social movement, and we have been taken for granted for too long by politicians who are scared to stand up to the fossil fuel industry. It's time to make it clear that a politician who green lights the fossil fuels industry's attempts to poison our communities and ruin our climate will not get our votes under any circumstances.

The week will begin Saturday, Nov. 1, as The Great March for Climate Action concludes its cross-country walk, which began in early March in Los Angeles. These heroic marchers have inspired us with their determined, day-after-day commitment over what will be eight months when they march into DC.

Then, from Nov. 3-7, following a day of meeting, planning and training on Nov. 2, there will be nonviolent direct actions every morning to block the two entrances to Federal Energy Regulatory Commission (FERC). On July 14, 25 people did this action and were successful in disrupting business-as-usual for two hours until they were arrested. That experience will inform the bigger and stronger actions being planned for November.

There will also be demonstrations at other locations—perhaps the Energy Department, Dominion Resources, the White House, American Petroleum Institute, Democratic National Committee headquarters, and neighborhoods in DC impacted by environmental and racial injustices—in the afternoon, challenging the web of denial throughout the government and industry about the seriousness of the emergency we are in.

Our invitation to you is this: Join the Beyond Extreme Energy actions for one or more days in Washington DC, Nov. 1-7. Help sound a call for stepped-up multi-day actions and campaigns that commensurate with the scale of escalating fossil fuel extraction, rampant environmental injustices in low-income and people of color communities throughout the world, and the emergencies inherent in climate change. Help model for others what necessary and effective climate action looks like as atmospheric carbon climbs ever faster on its way past 400 parts per million. Help build a movement that is more committed to climate justice than the fossil fuel industry is to profits.

As Ralph Waldo Emerson said, “Oh my friends, there are resources in us on which we have not drawn." Let's engage those vast resources of people power in our struggle for climate justice so we can keep fossil fuels in the ground. We know we have the power to stop extreme energy extraction, and now is the time to use it.

Tim DeChristopher is a co-founder of Peaceful Uprising. His trial and subsequent two year prison sentence for disrupting a 2008 federal auction of oil and gas leases was the subject of the award winning documentary Bidder 70.

The Reverend Lennox Yearwood is the president and CEO of the Hip Hop Caucus, a national nonprofit organization that equips young people to participate in elections, policy analysis and service project.