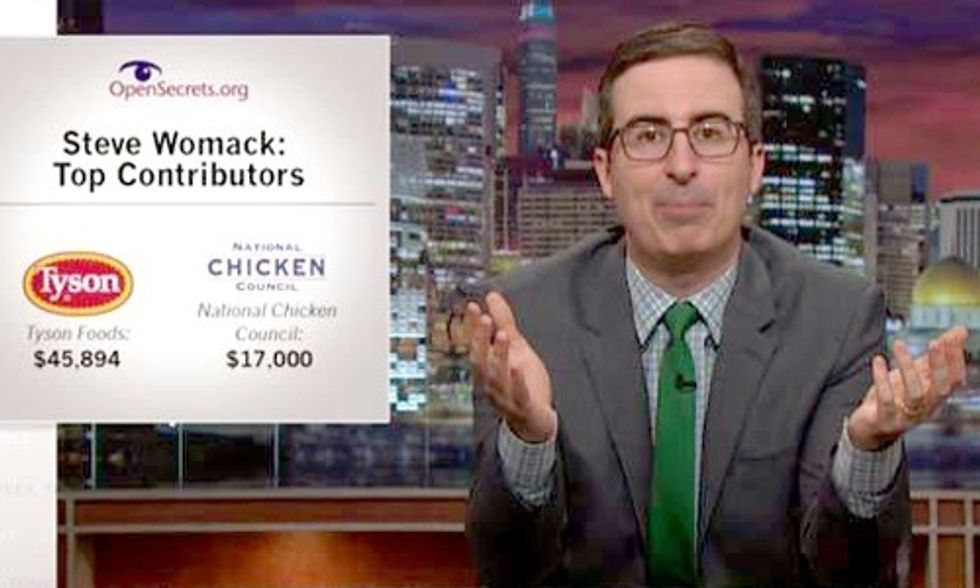 John Oliver, comedic anchorman of HBO show Last Week Tonight, made feathers fly when he took on the poultry industry in a May 2015 episode. Last week, it became clear that his gripe with Big Chicken had echoed all the way to the Capitol.

Oliver used his HBO show to attack the giant poultry processors—Tyson Foods, Perdue Farms, Pilgrim’s Pride and Sanderson Farms—for punishing chicken farmers who speak out against terms dictated by the processors (according to a 2001 study, 71 percent of the farmers live below the poverty line) and pitting them against one another through contract farming.

Oliver noted that each year, a tiny provision—the GIPSA rider (for Grain Inspection, Packers, and Stockyards Administration)—has been inserted into the House Appropriations bill. The rider defunds the Agriculture Department’s effort to finalize rules meant to protect the farmers, which were developed under the terms of a different statute. (Not the first time Congress has twisted itself into a double-negative pretzel).

Two lawmakers, Rep. Marcy Kaptur (D-OH) and Rep. Chellie Pingree (D-ME), have led the charge to torpedo the GIPSA rider, but have been stymied repeatedly by colleagues like Rep. Steve Womack (R-AR). Oliver used our data to note that Womack, a member of the Appropriations Committee from the district where Tyson is headquartered, has received tens of thousands of dollars from individuals associated with Tyson and the National Chicken Council, the industry’s trade group.

But the money flow does not stop there. Kaptur published a press release with the names of representatives who voted against her provision. Of them, in 2014, Reps. Jack Kingston (R-GA), Robert Aderholt (R-AL), and Henry Cuellar (D-TX) received contributions from Tyson. Rep. Andy Harris (R) received contributions from Perdue (both are based in Maryland); Rep. Kay Granger (R-TX) received a donation from Pilgrim’s Pride, and Sanderson gave thousands to the late Rep. Alan Nunnelee (R), who hailed from the Mississippi district where the company is headquartered (he died earlier this year). Each of them received a substantial portion of the National Chicken Council’s $302,900 in 2014 contributions.

Big poultry companies have also spent millions in Washington lobbying on behalf of their interests. The National Chicken Council has spent more than $2.5 million just in the last five years; Tyson goes above and beyond with more than $9 million in recent lobbying expenditures; Perdue has spent hundreds of thousands, as has Pilgrim’s; and Sanderson Farms has spent more than a million dollars in the last three years. They have each lobbied against GIPSA reform in some capacity.

As it turns out, Oliver’s beef with the chicken giants may have made a difference.

As it turns out, Oliver’s beef with the chicken giants may have made a difference.