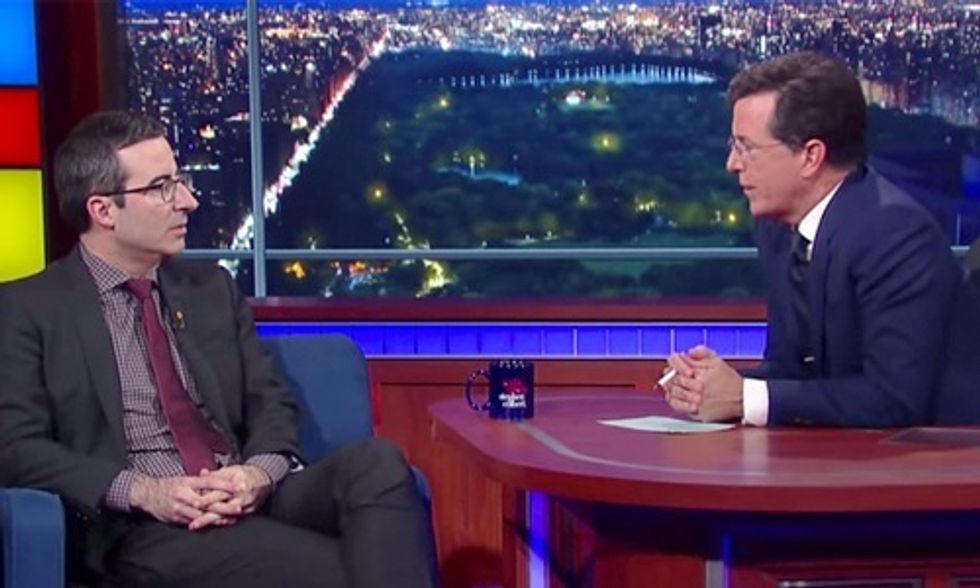 John Oliver was a guest on the Late Show with Stephen Colbert last night. When Colbert asked Oliver what he thinks of Donald Trump, Oliver couldn't express enough how much he didn't care about The Donald. He pointed out how it's only 2015, and yet we are obsessing over the 2016 presidential candidates when there are far more important issues to be covering.

In his years on The Daily Show with Jon Stewart and now hosting his own show Last Week Tonight with John Oliver, Oliver has covered some very pressing issues and he's done it in some really clever and funny ways. From talking about the American Legislative Exchange Council (ALEC) to America's crumbling infrastructure, to the time he sent "suspiciously cheap" food to fashion CEOs selling "shockingly cheap" clothing. He's even teamed up with Bill Nye to call out climate deniers, addressed food waste and exposed the horrors of the chicken industry.

Watch what he has to say about Donald Trump on the Late Show:

Colbert, on the other hand, fears that because Trump is slumping in the polls, he might drop out.

Find out why that has Colbert worried: