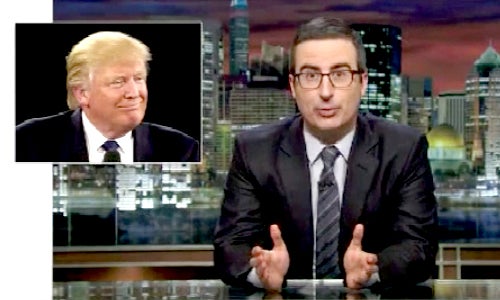 Just two days before the Nuclear Security Summit in Washington, DC, where world leaders gather to reinforce a commitment to secure nuclear materials, “America’s potential next president mentions that he’d be perfectly comfortable with other countries becoming nuclear powers, including Japan and South Korea,” John Oliver said in his quick recap of the week on Last Week Tonight.

Oliver played a clip from CNN’s town hall with Anderson Cooper where Donald Trump said, “We’re better off if Japan protects itself against this maniac in North Korea. We’re better of frankly if South Korea is going to start protecting it self.”

Oliver responded by saying, “He says that with the confidence of a man who could easily find Saudi Arabia on a map if he was given three tries and the map only included countries ending with Arabia.”

Oliver then played a clip of President Obama responding to Trump’s nuclear comments.