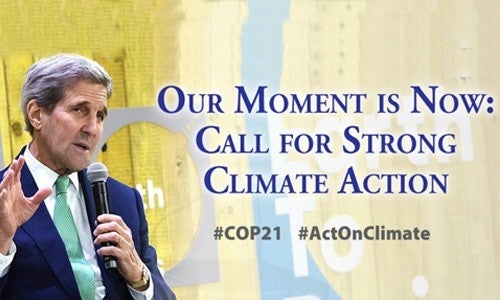 This afternoon at the COP21 negotiations at Le Bourget in Paris, Sec. of State John Kerry addressed the conference. Sec. Kerry announced he would double the U.S. commitment to support efforts in nations and communities to more than $800 million.

Sec. Kerry’s important announcement is another example of American leadership helping bring nations around the world together to tackle the climate crisis.

.@JohnKerry: Clean energy is solution to #climatechange, also 1 of greatest econ opportunities we have ever known. https://t.co/TBjmXrrGGW

This support helps fulfill the moral obligation we have to aid those directly affected by the carbon pollution disproportionately created in developed countries that is disproportionately affecting developing countries. It is both the right thing to do and the smart thing to do, as extreme weather generates instability and insecurity in communities at home and abroad. We’ve seen that in our backyards, with thousands of American families displaced by extreme storms like Katrina and Sandy.

The American people have made it clear that they have the Obama Administration’s back as they lead the way to secure an agreement in Paris, so Sec.Kerry and our negotiating team are absolutely right to ignore the pointless posturing of Congressional Republicans and their fossil fuel industry allies. The Obama Administration’s leadership on climate is growing more steadfast by the day and we are confident that this pledge will be delivered. That’s what the American people have made clear that they want and what the world needs.