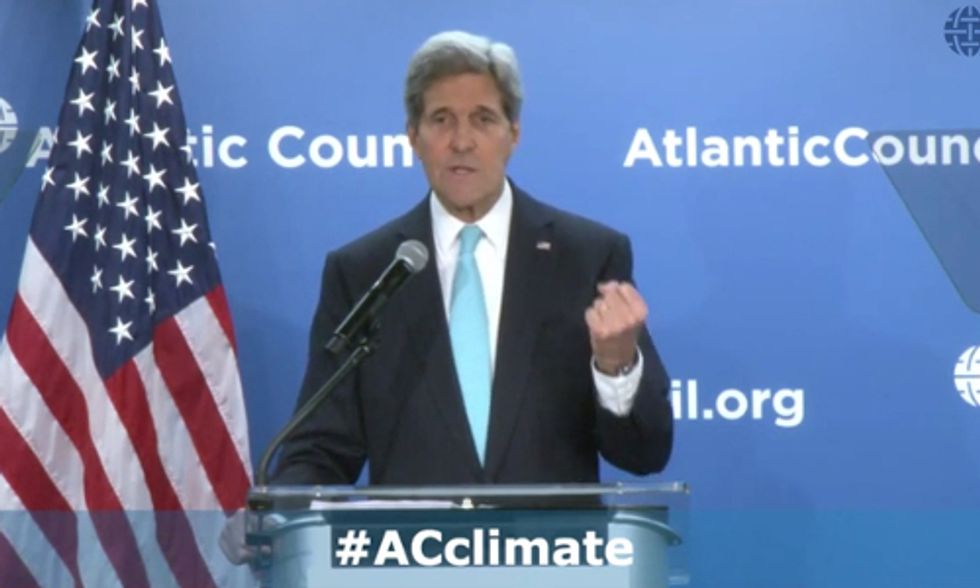 John Kerry has been a long-time proponent for aggressive action on climate issues, first as a U.S. Senator and currently as President Obama's Secretary of State. This morning he spoke to the Washington D.C.-based international affairs think tank the Atlantic Council on the significance of the Paris climate conference (COP21) taking place in nine months. Kerry's speech was part of a series of programs hosted by the Atlantic Council called the The Road to Paris.

Kerry forcefully reiterated the message he's been putting out for years: that climate change is real, that it must be addressed and that even if you don't believe it's real, only good can come from acting as if it were.

He recalled his own history of engagement with climate-related issues, saying, "Climate change is an issue that is personal to me, and it has been since the 1980s, when we were organizing the very first climate hearings in the Senate. In fact, it really predates that, going back to Earth Day when I’d come back from Vietnam. It was the first political thing I began to organize in Massachusetts, when citizens started to make a solid statement in this country. It all came out of that kind of citizen movement. And that’s what we have to be involved in now. And the reason for that is simple: For decades now, the science has been screaming at us, warning us, trying to compel us to act."

He recalled the earliest Senate hearings he helped organize with former Senators Al Gore, Tim Wirth and others, at which retired NASA scientist James Hansen testified about global warming and expressed his incredulity that it was still being debated as a "two sides" issue.

.@johnkerry: "We literally do not have the time to waste debating whether we can say the word 'climate change.'" #ActOnClimate #ACclimate

"When an apple falls from a tree, it will drop toward the ground," sad Kerry. "We know that because of the basic laws of physics. Science tells us that gravity exists, and no one disputes that. Science also tells us that when the water temperature drops below 32 degrees Fahrenheit, it turns to ice. No one disputes that. So when science tells us that our climate is changing and humans beings are largely causing that change, by what right do people stand up and just say, 'Well, I dispute that' or 'I deny that elementary truth?' And yet, there are those who do so. Literally a couple of days ago, I read about some state officials who are actually trying to ban the use of the term 'climate change' in public documents because they’re not willing to face the facts. Now folks, we literally do not have the time to waste debating whether we can say 'climate change.'"

That was a reference to the revelation that the administration of Florida Governor Rick Scott mandated that the term "climate change" be removed from all official documents.

But, he said, no matter how much Gov. Scott and other climate deniers "want to bury their heads in the sand, it will not alter the fact that 97 percent of peer-reviewed climate studies confirm that climate change is happening and that human activity is largely responsible. It is rare, rare, rare to get a super majority of studies to agree on anything. But 97 percent, over 20-plus years—that’s a dramatic statement of fact that no one of good conscience has a right to ignore."

Kerry took an oblique dig at the deniers' favorite line "I'm not a scientist but ...," saying "You don’t need to be a scientist to see that the world is already changing and feeling the impacts of global climate change and significantly. Many of the things I mentioned a moment ago are already beginning to unfold before our eyes. Just look around you. Everything is changing. It’s happening before our eyes. There is no excuse for ignoring this problem."

You don't have to be a scientist to see that the world is already experiencing #climatechange - @JohnKerry #ACClimate pic.twitter.com/moDBcFsknq — AtlanticCouncil (@AtlanticCouncil) March 12, 2015

This is a critical year and the upcoming talks in Paris are critical as well, Kerry told his audience. He pointed out that that any agreement that came out of the Paris talks would not be a solution but just a first step—and that it was essential to take that first step to make countries around the globe aware of the need to keep working on solutions. Those solutions, he said, lay in focusing on clean energy.

"If we think more creatively about how we power our cars, heat our homes, operate our businesses, then we still have time to prevent the worst consequences of climate change," he said. He went on to tout President Obama's Climate Action Plan, talking about how it targets emissions in power plants and transportation, increases vehicle fuel efficiency. But, he said, it's essential also to strongly support the development of clean energy sources.

And while he said that no country, including the U.S., could make an impact on its own, industrialized countries, which contribute a bulk of the climate-changing greenhouse gas emissions, have to be leaders in reducing them.

He also admitted that liquified natural gas (LNG) and so-called "clean coal" were not real solutions. "While LNG is 50 percent less carbon-intensive than oil, it’s nevertheless carbon, and it has its impact," he said, adding that there is "no such thing in the end as clean coal."

Kerry refuted those who say we can't afford to address climate change, saying we can't afford not to, given that it will increase food insecurity, damage from extreme weather events and sickness from pollution, all of which have big costs. And he added that addressing climate change is "one of the greatest economic opportunities of all time," saying "This is the way you put people to work." He referred to a report released this morning by the Department of Energy which detailed how wind power could increase its share of the energy market to 35 percent by 2050 and create hundreds of thousands of jobs in the process.

Sec Kerry: if we don't change paths the world will be transformed for the worse #climate #ACclimate pic.twitter.com/nszFo0UItk

He also suggested that even if by some long-shot chance 97 percent of the scientists who say climate change is happening were wrong, we'd still be better off for making the changes.

"You’ll create an extraordinary number of jobs, you’ll kick our economies into gear all around the world, because we’ll be taking advantage of one of the biggest business opportunities the world has ever known," said Kerry. "We’ll have healthier people. Those billions of dollars of costs in the summer and at hospitals and for emphysema, lung disease, particulate cancer, will be reduced because we’ll be eliminating a lot of the toxic pollution coming from smoke stacks and tall pipes. Air will be cleaner. We’ll have a more secure world because it’ll be far easier for countries to attain the long-lasting energy independence and security they need to thrive."

"What’s the other side of that question?" Kerry concluded. "What will happen if we do nothing and the climate skeptics are wrong and the delayers are wrong and the people who calculate cost without taking everything into account are wrong? The answer to that is pretty straightforward: utter catastrophe."

"Secretary Kerry's powerful speech lays out the case that when we make energy choices, taking into account the health of our climate, community, and survival as a species is simply the right thing to do," Sierra Club executive director Michael Brune said in response to the speech.

"Secretary Kerry is absolutely correct: keeping our economy tied to outdated coal, oil, and gas is too risky on every front—we need to support innovation, prosperity, and the health of our communities through clean energy.”