John Kerry: 'Climate Change Is Not Just About Bambi,' It Threatens All of Humanity 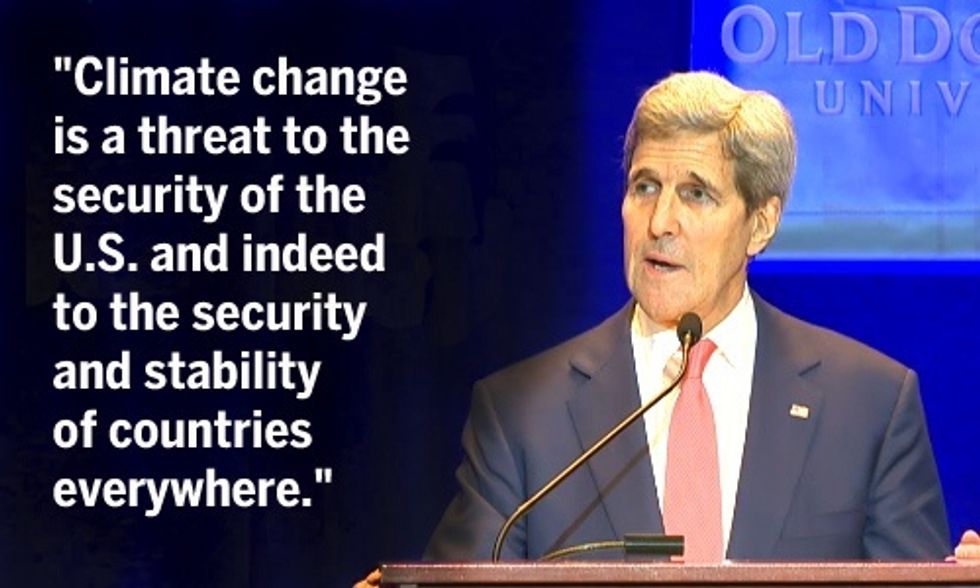 U.S. Sec. of State John Kerry delivered a speech on Climate Change and National Security this morning at Old Dominion University in Norfolk, Virginia. Old Dominion and the city of Norfolk are in a strategic location for mitigating and adapting to climate change. Norfolk is a coastal community that is already dealing with the consequences of sea level rise, and it's home to the largest Navy base in the world—Naval Station Norfolk.

Kerry, a former member of the Navy, said the future of coastal communities—and indeed all communities—will depend on whether or not we as a global community can come together to address climate change. In his time as Secretary of State, Kerry has repeatedly emphasized the threat of climate change.

Citing impacts of extreme weather events, including flooding, drought and rapid sea level rise, Sec. Kerry said climate change will affect people in dramatic ways. He was deeply critical of those who deny climate science and challenge climate change policies by invoking the "I'm not a scientist" argument. "Those who continue to make climate change a political fight put us all at risk," he warned.

"Three decades in a row—19 of the 20 warmest years in recorded history—have occurred in the past two decades," said Kerry. "This year is on track to be the warmest of all."

But the Secretary of State was not all doom and gloom. "The worst impacts" of climate change "are not inevitable," says Kerry. "We still have time to transition to a global clean energy economy and put the world on a much safer, much more sustainable path. And believe me, if we let the opportunity to do so pass us by, it may be the primary thing that our generation is remembered for."