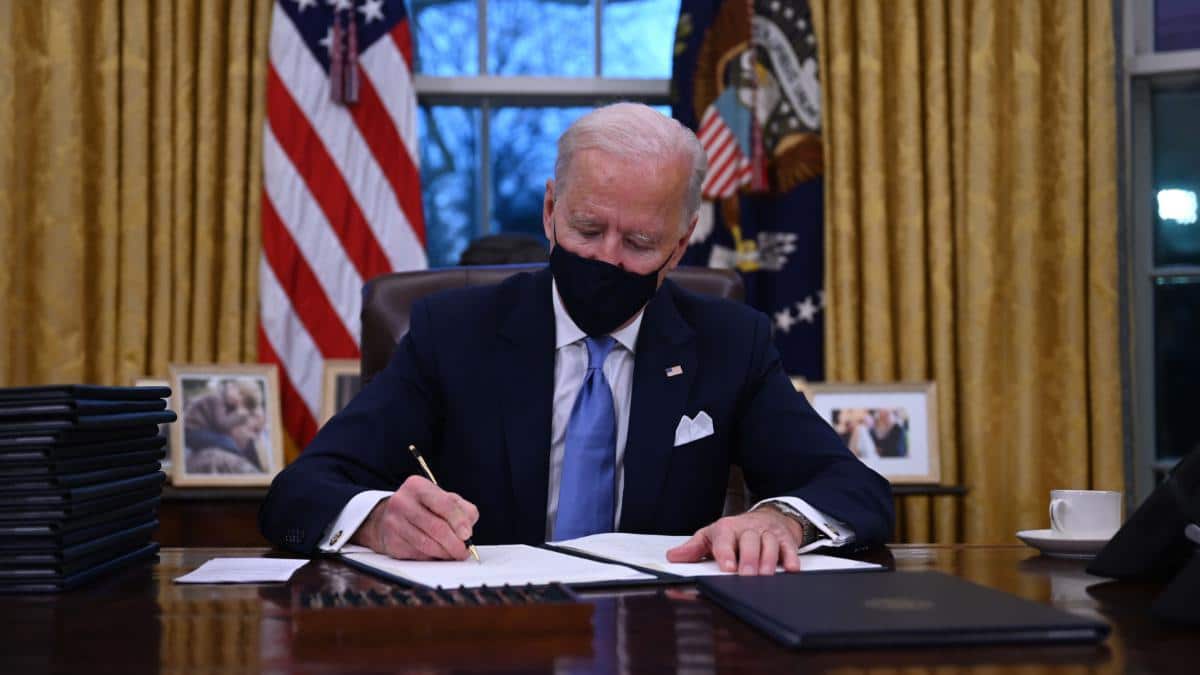 U.S. President Joe Biden sits in the Oval Office as he signs a series of orders at the White House in Washington, D.C. on January 20, 2021. Jim Watson / AFP / Getty Images

As he did on his campaign and transition website, Biden emphasized the climate crisis as one of the major challenges facing his administration, along with the coronavirus pandemic and systemic racism.

“A cry for survival comes from the planet itself,” Biden said in his inaugural address. “A cry that can’t be any more desperate or any more clear.”

Hours after his inauguration, Biden signed a total of 17 executive orders, memorandums and proclamations, The New York Times reported. Some of these orders had important implications for the climate and environment.

Biden honored a campaign promise by rejoining the Paris Agreement on his first day in office.

The agreement recommits the U.S. to reducing greenhouse gas emissions enough to limit global warming to well below two degrees Celsius above pre-industrial levels. Under Trump, the U.S. officially exited in November 2020.

Biden’s reversal means the U.S. will now rejoin the agreement 30 days from Jan. 20.

The 1,700-mile pipeline would have carried around 800,000 barrels of oil a day from Alberta, Canada to the Texas Gulf Coast, The Associated Press reported. The Obama administration revoked the permit in 2015, but the Trump administration reversed course.

Construction on the controversial project halted Wednesday in light of Biden’s action, The Associated Press reported.

The order specifically highlighted four rollbacks to be halted, altered or revoked: methane emissions in the oil and gas sector, fuel efficiency standards for cars and light trucks, energy efficiency standards for appliances and buildings, and air pollution controls, including the decision to limit certain scientific studies for setting public health policies.

Further, Biden called for a review of the shrinking of Bears Ears and Grand Staircase Escalante National Monuments and the opening the Northeast Canyons and Seamounts Marine National Monument to commercial fishing. Biden also paused oil and gas leasing in the Arctic National Wildlife Refuge.

Biden also signed an executive order stopping construction of the wall along the U.S. border with Mexico.

While the order did not mention the environment, several conservation groups have opposed the wall for its impacts on wildlife and ecosystems. One study found that wall construction could threaten eight species with extinction. It also imperils the National Butterfly Center in Texas, home to important pollinators.

However, everyone, including Biden, acknowledged that more work remained.

“They are just executive actions. They are important but we’re going to need legislation for a lot of the things we’re going to do,” Biden said according to The New York Times.

Biden’s climate plan calls for a zero-emissions electricity sector by 2035, and zero emissions across the board by 2050. The plan will likely require approval from Congress, and some Republicans are already fighting Biden’s actions. Montana Senator Steve Daines said he would introduce legislation requiring the president to get Senate approval for rejoining the Paris agreement. Daines also plans to introduce legislation that would approve the Keystone XL pipeline.

Meanwhile, Indigenous groups praised Biden’s action on Keystone XL but called for him to revoke the permits of other pipelines.

“It is imperative that we keep the pressure on President Biden to put an end to ALL fossil fuel infrastructure and projects, making the ones that are near or on Indigenous territories of top priority,” Tasina Sapa Win Smith, co-founder of Cheyenne River Grassroots Collective, said in a statement from the Indigenous Environmental Network.