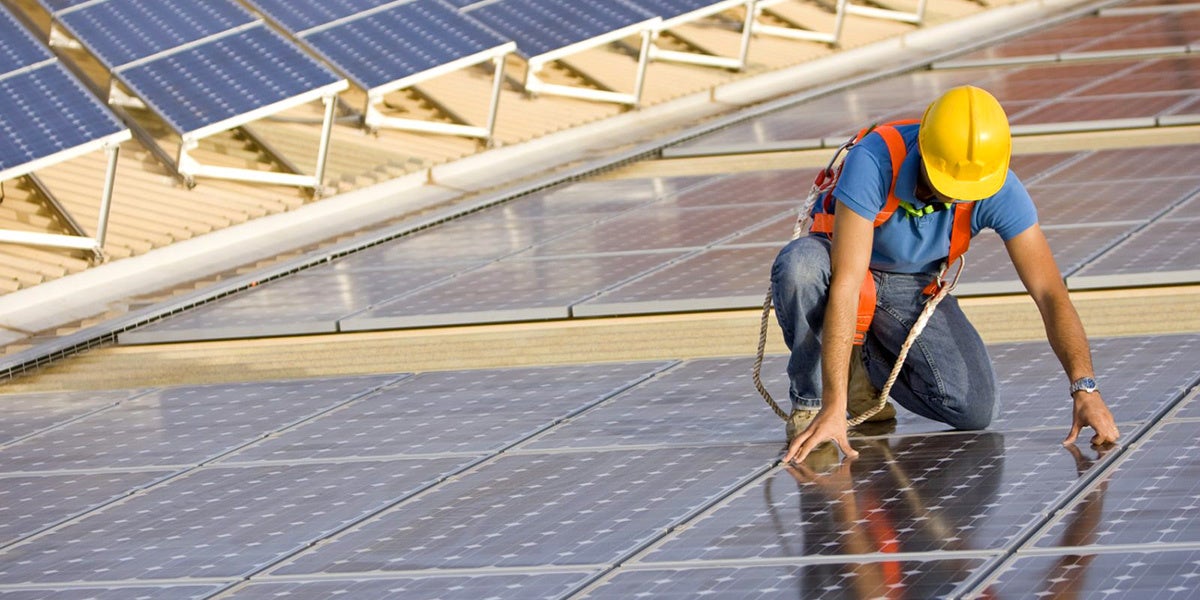 In March 2017, I testified before the House Energy and Commerce Committee on how federal tax credits for renewable energy have been a key driver for the recent growth in the U.S. wind and solar industries, creating new jobs, income and tax revenues for local communities. They have also helped drive down the cost of wind and solar power by more than two-thirds since 2009, making renewable energy more affordable for consumers.

Originally enacted as part of the Energy Policy Act of 1992, Congress has extended the Production Tax Credit (PTC) seven times and has allowed it to expire on six occasions. This “on-again/off-again” status resulted in a boom-bust cycle of development in the wind industry. In the years following expiration, installations dropped between 76 and 93 percent, with corresponding job losses. Congress has also extended the Investment Tax Credit (ITC) for solar several times.

Finally, after many years of this policy uncertainty, Congress passed a five-year extension and phase-down of the PTC and the ITC for wind and solar in December 2015. The legislation also removed the longstanding U.S. oil export ban, as part of a compromise deal with the oil industry.

Unfortunately, the Senate and House tax bills would renege on this deal and change the rules midstream, resulting in major job losses across the U.S. renewable energy industry. They would also jeopardize tens of billions in investments in renewable energy projects and manufacturing facilities in rural communities across America—many of which are in districts and states held by Republicans and that voted for President Trump.

The renewable energy industry initially praised an earlier version of the Senate tax bill, which honored the 2015 deal and did not make any direct changes to the PTC and ITC. However, the Senate made two last-minute changes to the bill to fill revenue gaps and build support from key Republicans that were concerned about the deficit that would have a significant impact on renewable energy projects.

Alternative Minimum Tax (AMT): One of these last-minute changes was to restore the AMT to fill a $40 billion revenue gap. The proposal in both the Senate and House tax bills to reduce the corporate tax rate to 20 percent would likely move most U.S. corporations from the regular corporate income tax rate to the AMT (which is also set at 20 percent on a broader tax base), according to tax experts.

However, not all tax credits count toward the AMT and depreciation must be calculated at a slower rate. While the ITC for solar projects can count toward the AMT, the PTC for wind projects (and geothermal, biomass, landfill gas and incremental hydro projects) can only count for the first 4 years out of the 10-year window that projects are eligible to receive the tax credits. Not only would this jeopardize investment in new projects, it would have a retroactive impact on existing projects placed in service after 2007 that are still receiving tax credits under the PTC.

Base-Erosion Anti-Abuse Tax (BEAT): The Senate also made a last-minute change to the BEAT provision that could greatly reduce tax equity financing for renewable energy projects. BEAT would impose a tax on large corporations that make cross-border payments by requiring them to add those payments to their taxable income. This amount is then multiplied by 10 percent to determine what they owe to the government (except for banks and security dealers, which the Senate raised to 11 percent). These corporations must also calculate their regular tax liability minus any tax credits they receive, including the PTC and the ITC. If their adjusted tax liability is less than the fraction of their taxable income with the cross-border payments, the company would have to pay the difference to the IRS as a tax.

The more tax credits a company has, the more a company is likely to pay, making banks and other large tax equity investors reluctant to finance renewable energy projects. And like the AMT, the BEAT provision would not only impact financing for new projects but could have a retroactive effect on most existing projects that received tax equity financing.

The Senate tax bill would have a big impact on companies like JPMorgan, Bank of America, GE, US Bank and Citigroup that led tax equity financing in 2016 for both wind and solar projects, as shown in this BNEF chart. 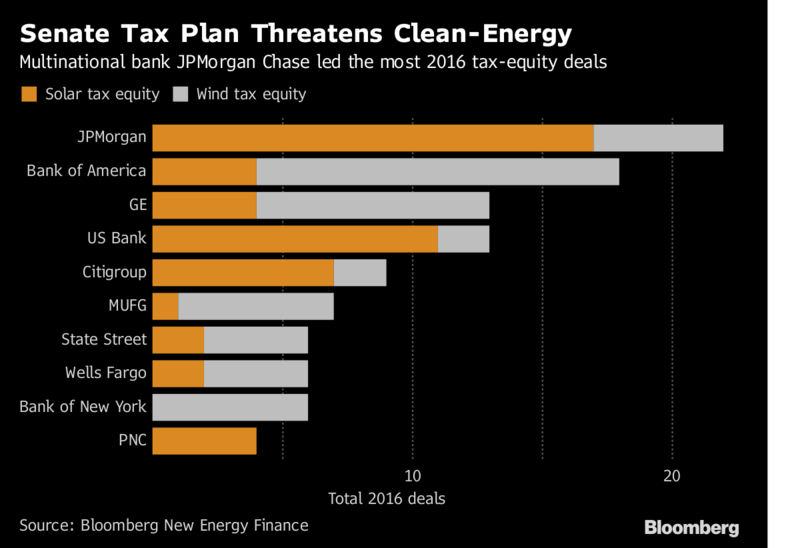 The BEAT provision would also hurt other energy sources that currently receive tax credits such as refined coal facilities placed in service by December 2011. The coal industry is also speaking out against the AMT, which Bob Murray claims will cost his company $50-60 million in increased taxes and eliminate 65,000 jobs.

While the House bill does not include the AMT or BEAT provisions, it makes several direct changes to the PTC and ITC that would undermine investments in new wind and solar projects and have a retroactive impact on existing projects. These changes include:

The House bill would cut new wind development by more than half by 2020, according to both Bloomberg and Goldman Sachs. The American Wind Energy Association estimates that the House bill would put 30,000 MW of new wind projects that are under development in the U.S. worth $50 billion of new private investment at risk, along with 60,000 jobs, as shown in this map. 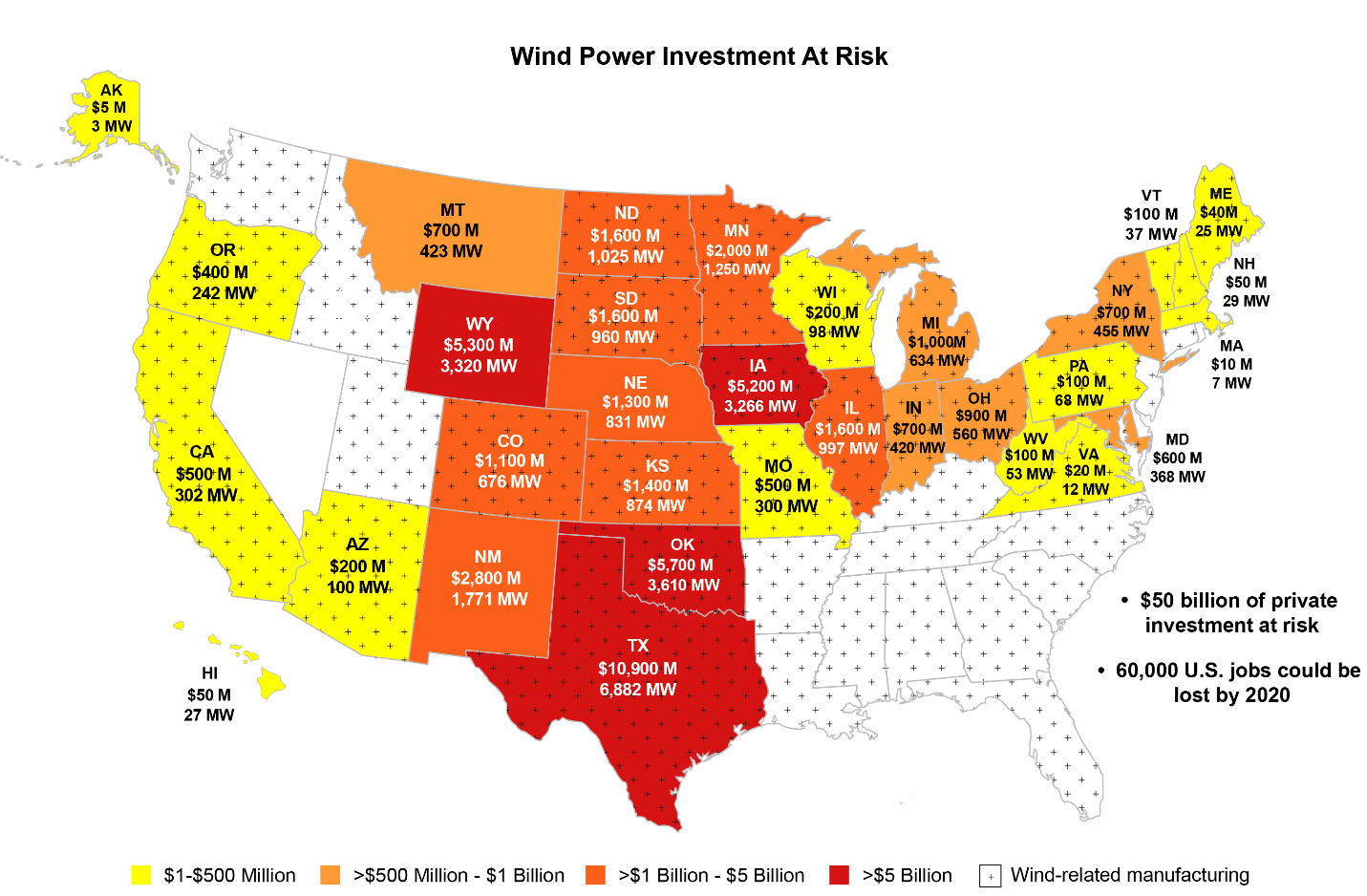 The provisions in the House bill that renege on Congress’ 2015 compromise deal with the oil industry and drastically cut the value of the PTC are completely unacceptable and should be dropped. The AMT and BEAT provisions in the Senate bill should either be dropped (they are not included in the House bill) or renewable energy tax credits should be excluded—similar to how R&D tax credits are currently excluded from the BEAT provision.

House and Senate conferees were named last week. They will meet over the next two weeks to resolve key differences, with the goal of delivering a final bill to President Trump by the end of the year.

It is an ominous sign that Sen. Grassley (R-IA), a senior member of the Senate Finance Committee, was left off the conference committee. As the father of the PTC, who represents a state that ranks second in installed wind capacity, he has been outspoken about honoring the 2015 deal and working to fix the problems in the Senate and House tax bills. “The wind energy production tax credit is already being phased out under a compromise brokered in 2015. It shouldn’t be re-opened,” Grassley said.

Pro-renewables Senators like Grassley and Susan Collins (R-ME) will have a tough vote to make on the Senate floor if these damaging provisions are not addressed in conference. Maine, for example, has more than 900 MW of existing wind capacity and nearly 300 MW of new solar and wind under development that is potentially at risk.

But there are conferees who represent states with large renewable energy industries, and they are in unique position to make the changes necessary to keep that clean energy momentum going.

The U.S. renewable energy industry has a proven track record of creating new jobs and making new investments in states and rural areas across America. Federal tax reform should encourage rather than discourage U.S. investment in this rapidly growing global industry.

Make sure your members of congress know clean energy is important to you. Tell them to fix the AMT and BEAT provisions, and to leave the renewable energy tax credits alone.

Steve Clemmer is the director of energy research and an expert on the economic and environmental benefits of implementing renewable energy technologies and policies.