Jimmy Carter: The U.S. Is an 'Oligarchy With Unlimited Political Bribery' 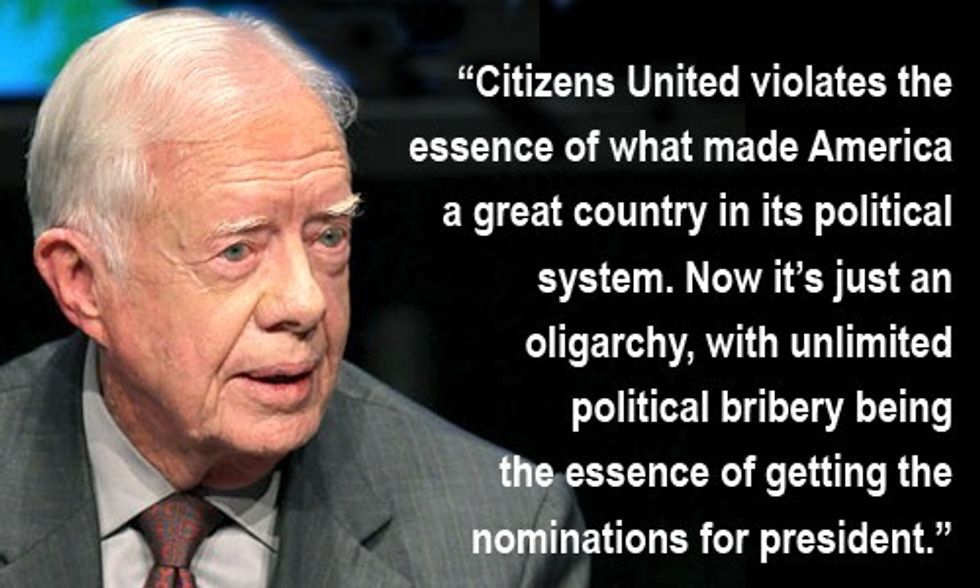 The Merriam-Webster online dictionary defines an "oligarchy" as: "A government in which a small group exercises control especially for corrupt and selfish purposes."

Former President Jimmy Carter had some choice words for our form of government, post-Citizen's United, on my radio program last week. When I asked him his thoughts on the state of American politics since five right-wing justices on the U.S. Supreme Court opened the doors to "unlimited money" in our political discourse via Citizens United, Carter was blunt and to the point.

President Jimmy Carter: The United States is an Oligarchy... http://t.co/IyJAjJa15z

“It violates the essence of what made America a great country in its political system. Now it’s just an oligarchy, with unlimited political bribery being the essence of getting the nominations for president or to elect the president. And the same thing applies to governors and U.S. senators and congress members.

"So now we’ve just seen a complete subversion of our political system as a payoff to major contributors, who want and expect and sometimes get favors for themselves after the election’s over."

I asked him then what might change things and he said it would take a “horrible, disgraceful” corruption scandal (think Nixon) that would "turn the public against it [Citizens United] and maybe even the Congress and the Supreme Court."

Carter added, "The incumbents, Democrats and Republicans, look upon this unlimited money as a great benefit to themselves. Somebody who’s already in Congress has a lot more to sell to an avid contributor than somebody who’s just a challenger, so it benefits both parties.”

Carter's observations validate Justice John Paul Stevens' dissent in the Citizens United case (Ginsberg, Bryer and Sotomayor concurring), when Stevens wrote about what he foresaw as the future of American politics because of the Citizens United decision that was handed down that day:

"In addition to this immediate drowning out of noncorporate voices, there may be deleterious effects that follow soon thereafter [this decision]. Corporate ‘domination’ of electioneering can generate the impression that corporations dominate our democracy."

"When citizens turn on their televisions and radios before an election and hear only corporate electioneering, they may lose faith in their capacity, as citizens, to influence public policy. A government captured by corporate interests, they may come to believe, will be neither responsive to their needs nor willing to give their views a fair hearing."

"The predictable result is cynicism and disenchantment: an increased perception that large spenders ‘call the tune’ and a reduced ‘willingness of voters to take part in democratic governance.’ To the extent that corporations are allowed to exert undue influence in electoral races, the speech of the eventual winners of those races may also be chilled."

"Politicians who fear that a certain corporation can make or break their reelection chances may be cowed into silence about that corporation. On a variety of levels, unregulated corporate electioneering might diminish the ability of citizens to 'hold officials accountable to the people’ and disserve the goal of a public debate that is 'uninhibited, robust and wide-open.' At the least, I stress again, a legislature is entitled to credit these concerns and to take tailored measures in response."

President Carter is right. Corporate interests (oil companies, for example, are why Republicans and a few bought-out Democrats deny climate change) and the billionaires who got rich off their corporations have seized control of most of our government.

One solution is a simple constitutional amendment that makes it clear that corporations are not and don’t have the rights of, human persons and that reverses the 1976 Buckley decision by saying explicitly that spending money on politics is a behavior that can be regulated, not a form of “speech” with broad immunity under the First Amendment.

Politicians are catching on. Senator Bernie Sanders, who aspires to President Carter’s old job, has not only endorsed such an amendment (he’s alone in this among all presidential candidates) but has even introduced a version of it several times into Congress.

President Obama: ‘It’s Time for America and the World to Act on Climate Change’