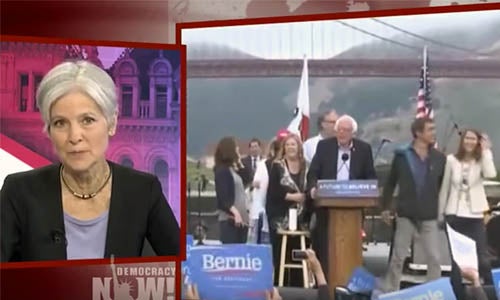 As Bernie Sanders prepares to meet with President Obama, we speak to Green Party presidential candidate Jill Stein, who has also been reaching out to the Vermont senator.

With Hillary Clinton claiming victory in the Democratic race, Stein is attempting to start a dialogue with the Sanders campaign.

In an open letter in April, Stein wrote, “In this hour of unprecedented crisis—with human rights, civilization and life on the planet teetering on the brink—can we explore an historic collaboration to keep building the revolution beyond the reach of corporate party clutches, where the movement can take root and flourish, in the 2016 election and beyond?”

Stein joins us from Albany ahead of this weekend’s New York Green Party convention. Watch here:

Juan Gonzalez: We turn now to the race for the White House. Hillary Clinton has dominated this week’s news after claiming victory in the Democratic contest, setting her on a path to become the first woman to win a major party’s presidential nomination. With only one primary to go in the District of Columbia, Clinton has an insurmountable lead in pledged delegates over her challenger, Bernie Sanders. But Clinton’s pledged delegate count falls short of the 2,383 needed, meaning she will need to rely on the support of unelected superdelegates to officially secure the nomination at next month’s convention in Philadelphia.

But Hillary Clinton isn’t the only woman aiming to be on the ballot in November. Jill Stein is moving closer to securing the Green Party nomination. On Tuesday, Stein won the Green Party’s primary in California. She has so far won 20 of the 21 contests ahead of the party’s national convention in August in Houston.

Amy Goodman: Jill Stein first announced her candidacy on Democracy Now! last June. She also ran for president on the Green Party ticket in 2012. In April, she wrote an open letter to Bernie Sanders urging him to consider joining forces to, quote, “ensure the revolution for people, planet and peace will prevail,” unquote. Jill Stein joins us now from Albany, New York, ahead of Saturday’s nominating convention of the New York Green Party.

Jill Stein, welcome back to Democracy Now! Can you respond to what happened this week, Hillary Clinton clearly saying in the Brooklyn Navy Yard, before thousands of people, that she has secured the Democratic Party’s nomination, she is the presumptive nominee?

Dr. Jill Stein: Yes and good morning, Amy and Juan. It’s great to be with you. You know, this is kind of what many people have foreseen all along. It was kind of in the cards. The Democratic machine has very steeply tilted the playing field, from the beginning, by limiting the debates, limiting the exposure of Bernie Sanders, some very questionable election practices, 100,000 voters disappearing from the rolls in Brooklyn, some very questionable things that happened in the Democratic primary in California where independent voters thought they could just show up at the polls and cast a vote for Bernie Sanders but were unable to, by large numbers and huge discrepancies between the polls in advance and the actual outcome of the elections. So, you know and needless to say, the superdelegates have massively tipped the playing field. And the announcement the night before by major news organizations that Hillary Clinton had already clinched it, you know, hard to call that just a coincidence, seems tailor-made for discouraging people from actually turning out and exercising their right to vote.

So, this is what the Democratic Party has done for decades—many decades, in fact. And after the election of George McGovern in 1972 as a peace candidate—I should say his election to the nomination of the Democratic Party, the party changed the rules to steeply tilt that playing field, creating superdelegates and Super Tuesdays that make it very hard for a grassroots campaign to prevail. And over the years, the party has allowed principled candidates to be seen and heard, but has, at the end of the day, sabotaged them in one way or the other, often through fear campaigns and smear campaigns, in the same way that Bernie is being called a spoiler now and has been for some weeks. Dennis Kucinich was redistricted and basically, you know, taken off the political map. We saw Jesse Jackson the victim of a smear campaign. People remember the Dean scream that was used against Howard Dean as a peace candidate who was doing well. So, in many ways, the Democratic Party creates campaigns that fake left while it moves right and becomes more corporatist, more militarist, more imperialist. This is why we say it’s hard to have a revolutionary campaign inside of a counterrevolutionary party. That’s why we’re here as the Green Party to build a place where a revolutionary movement can truly grow with a political voice.

Juan Gonzalez: Well, Jill Stein, you’ve been trying for months to reach out to Bernie Sanders, because you acknowledge that there are many similarities in your program and his, to join forces. What’s been the response from the Sanders campaign and what are you hopeful for now?

Dr. Jill Stein: Well, the response over the last several weeks has been the same as the response over the last several years. And in fact, the Green Party reached out to Bernie Sanders before the last election to see if he might be interested in running on the Green Party ballot line. And that was in 2011. And basically, we haven’t heard back yet, so I’m not holding my breath that we are going to. And in fact, I think it was just yesterday that Senator Sanders announced that he would be meeting with President Obama to basically stay the course and to essentially move his campaign inside of the Democratic Party, which I think is a mistake and would be essentially an abandonment of the movement that has been built. We’ve seen many very principled and powerful efforts to reform the Democratic Party from within over the course of many years and Democratic Party keeps marching to the right. So, you know, my hope, as Senator Sanders himself said, is that this is a movement, it’s not a man. And my hope is that the movement will continue. And we’ve offered—I’ve offered, basically, to put everything on the table and to see how we can work together and explore the—what it would take in order for that to happen—

Dr. Jill Stein: —to run a joint ticket, for example.

Amy Goodman: So, let’s talk about that for a minute. Let’s go to Bernie Sanders last July speaking at the U.S. Hispanic Chamber of Commerce, when he was asked if he would run on a third-party ticket if he failed to win the Democratic nomination.

Sen. Bernie Sanders: If it happens that I do not win that process, would I run outside of the system? No, I made the promise that I would not and I’ll keep that promise. And let me add to that: And the reason for that is I do not want to be responsible for electing some right-wing Republican to be president of the United States of America.

Amy Goodman: So that is Bernie Sanders last July. You talked about the possibility of a joint ticket. Are you saying that you would—I mean, you are not the presidential nominee of the Green Party yet. You’re running in different state primaries and conventions. But are you suggesting that the Green Party would consider him being the presidential candidate, whether or not he would consider this?

Dr. Jill Stein: It would obviously take a major change of rules for that to happen. But what I’m saying is that if Senator Sanders made the case that now he understood, after the very, you know, disturbing experiences of the last many months and the way that he’s been mistreated and beaten up by the party, perhaps he has a different view of the potential to create revolution inside of a counterrevolutionary party. Maybe he has come to see the necessity for independent third parties to actually move this movement forward. That would be—you know, that would be a game changer if he made the case that he has come to understand the critical need to build the Green Party as the political voice of that revolution. If that were the case, I think many things would become possible at that point for making the rules changes. I can’t change those rules, but I can have those discussions with him and lay the groundwork for it. It would probably have to be taken to the Green Party convention. But in terms of my own view, you know, I’m a physician, not a politician. I don’t have a vested interest in a particular political career or a particular political office. My job is to do everything that I can to create an America and a world that we can live in and that we can survive in. And I would be very interested in having this discussion. I am not holding my breath that it’s going to happen. And I think it’s important that our campaign be plan B, if not for Senator Sanders, then for his supporters.