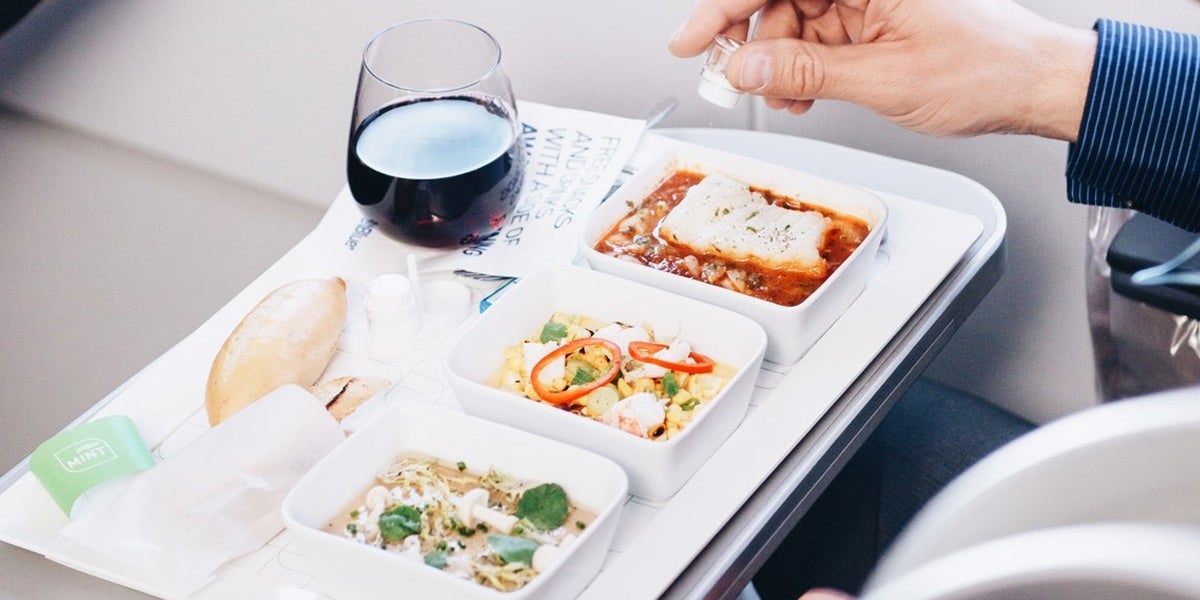 Much has been written about the JetBlue business class menu designed by Brad Farmerie, the executive chef of New York’s Saxon + Parole. “I’m in love!” one blogger gushed over the in-flight meals, which are a departure from the usual airline fare: a deviled egg with house-made sambal, bison meatloaf with blueberry quinoa or grilled avocado salad with salsa verde.

Even in coach and in the airport terminal, JetBlue brings more to the tray table than those (damn tasty) blue corn chips. There is, for example, a flourishing farm growing potatoes, kale, dill and oregano outside Terminal 5 at New York’s John F. Kennedy International Airport.

“Just because you booked an airline ticket doesn’t mean you have a deep love of concrete,” said Sophia Mendelsohn, JetBlue’s head of sustainability, referring to the formerly gray expanse of concrete the airline’s passengers used to look out at while sitting in Terminal 5—the area JetBlue “greenified” with the farm.

JFK reduces food miles after JetBlue open a farm in it's airport! 5000 crates of herbs & veggies ready for take off! pic.twitter.com/hqAeYtlncd

Her newest project operates under a similar ethos: “Just because you bought an airline ticket doesn’t mean you want to eat junk food,” she added. Or forget your social principles.

JetBlue is known for serving products from small, local New York food companies, such as Blue Marble Ice Cream and Brooklyn Roasting Company Coffee. Instead of hopefuls trying to get on board by cold calling the airline and sending samples, companies can apply to JetBlue’s BlueBud business-mentoring program. The airline shares lessons it has learned over 18 years in social responsibility, sustainability and marketing. The program also looks at the challenges of serving food at 30,000 feet. Cabin pressure, altitude and dry air zap about 30 percent of our tasting powers. Then there’s the tiny galley “kitchen.” Farmerie fights against palate atrophy with vinegars, spices and Maldon sea salt and against space constraints with dry ice and sous vide cooking. BlueBud asks food companies to consider how their recipes might need to be adapted or the packaging changed to work in-flight.

“We’ll walk you through how we look at food,” Mendelsohn said, adding that there are plans to expand the program.

At the end of the summer, Bronx Hot Sauce became the next small business invited into JetBlue’s culinary world and the partnership has the potential to lift up people tending community gardens in the Bronx.

A new urban garden begins in the #bronx at 1380 University. Look out 2017 #urbanfarming #g… https://t.co/H048uSArny pic.twitter.com/TKBWOSDGer

John A. Crotty, a Bronx Hot Sauce founder, works as an affordable housing developer by day. Through his work in the Bronx and the conversations he has had with people there, Crotty was struck with the way they told “the Bronx story.”

Crotty and his partners began to undertake projects in their buildings in the Bronx to inspire future thinking. There were education initiatives, arts programs and creative writing classes—but a vacant lot was what captured Crotty’s imagination.

“It was such a shithole, for lack of a better term,” he said. “There’s garbage everywhere. It’s awful. I said, ‘This would be a spectacular place for a garden, right?'”

That garden planted the seeds for Bronx Hot Sauce. Since 2014, the business has distributed free serrano pepper seedlings to any interested community garden. At the end of the season, growers can sell the mature crop back to Bronx Hot Sauce for $4 a pound. This year, more than 40 gardens grew peppers for the hot sauce and Crotty said about one ton of peppers will be purchased from the community.

As Bronx Hot Sauce fans out from fancy little food shops in the city to tristate-area grocery stores—from Whole Foods to the JetBlue University cafeteria to a pop-up store in JFK’s Terminal 5—Crotty thinks it can help people in the borough tell a new story in the future tense.

“When the people who work in the gardens—especially the younger people—see their product in big-time stores, it takes them out of the neighborhood they’re in and puts them on a way bigger platform,” he said. “It expands their universe very quickly.” Even the sky is no limit.