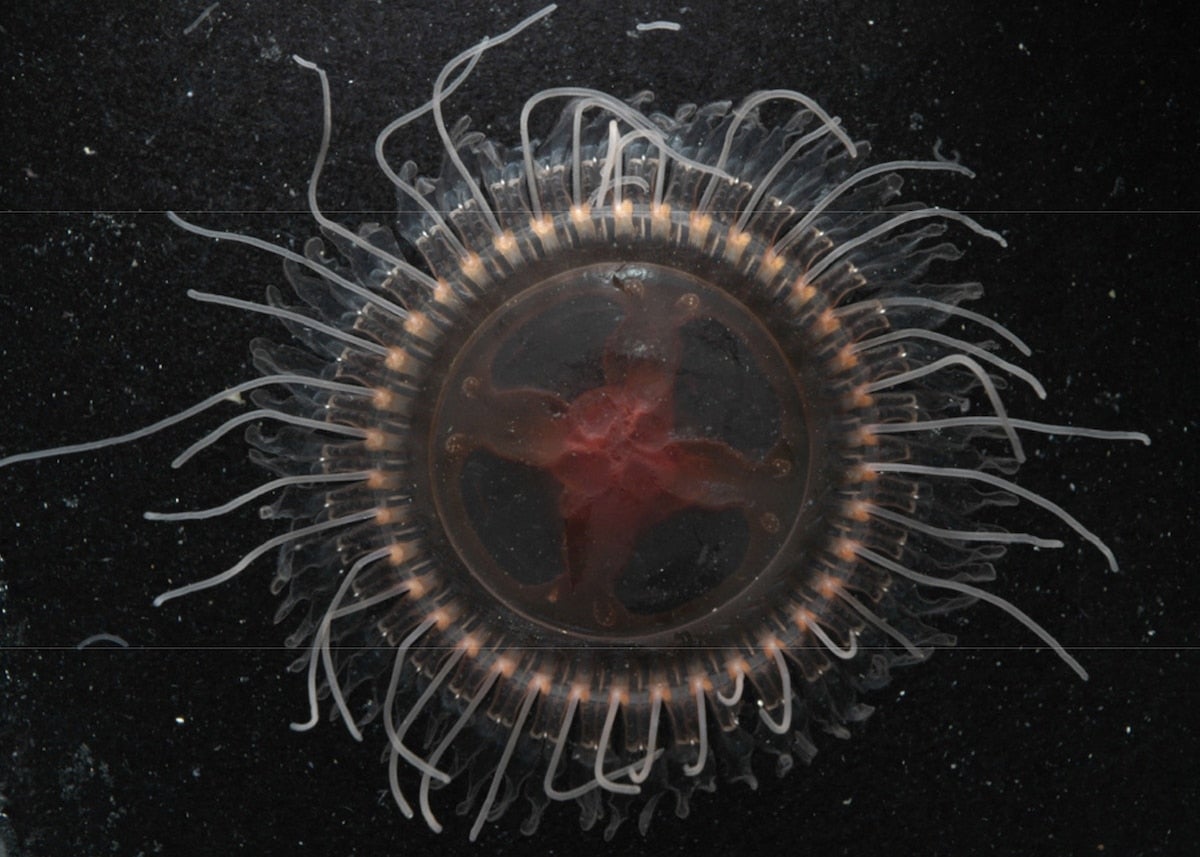 The Atolla is a common deep-sea crown jellyfish with a scarlet red bell and one tentacle that is longer than the others. Scientists have discovered a new species of Atolla that lives in the deep waters of Monterey Bay in a region called the “midnight zone,” where sunlight doesn’t reach.

There are ten recognized species of Atolla jellyfish, found all over the world, reported Phys.org. Fifteen years ago, researchers at the Monterey Bay Aquarium Research Institute (MBARI) noticed an Atolla that didn’t have the signature tentacle, which can elongate to six times the bell’s diameter and scientists believe helps them capture prey.

“We named this stunning new species in honor of Jeff Reynolds in recognition of the 4.3 million hours of service that he and other volunteers have contributed to the Monterey Bay Aquarium over the past 38 years,” said senior education and research specialist Dr. George Matsumoto, who was the lead author of the description of the new Atolla species, as Science News reported. “They have graciously given their time to educate the public about the wonders of the ocean. Aquarium volunteers have been instrumental in raising awareness about the fragility of the ocean and inspiring the public to care about the health of the ocean.”

A. reynoldsi is larger than other Atolla species, with the largest collected measuring 5.1 inches in diameter. Its bell has a large groove resembling a crown, from which crown jellyfish get their name. The crown on A. reynoldsi has spikey ridges and a gut “shaped like a Greek cross,” reported Phys.org.

“We realized that we had found an unusual jelly around 2014 and went back through our records to find a few additional observations,” Matsumoto said, as The Guardian reported. “We also kept an eye out for additional sightings so that we could obtain specimens to examine and deposit at the California Academy of Sciences.”

The number of tentacles varies on individual Atolla species, with A. reynoldsi having from 26 to 39, reported Phys.org. Occupying depths of 3,323 to 10,463 feet, A. reynoldsi are only known to live in Monterey Bay, and only ten have been observed by MBARI researchers between April 2006 and June 2021.

“This is such an honor to have this new species named after me. It also honors all the fantastic Aquarium volunteers over the decades, I was just the lucky one to be there so early on,” Jeff Reynolds said, as Phys.org reported. “Volunteering and working for the Aquarium for 42 years was just such an awesome and rewarding experience… [F]rom vacuuming the floor to caring for stranded sea otter pups to assisting with whale necropsies to building exhibit models.”

Volunteers at the Monterey Bay Aquarium have put in more than 4.3 million service hours since it opened in 1984.

“As an Aquarium volunteer myself, it’s so rewarding to see visitors fall in love with the ocean. We’re privileged to have the Monterey Bay Aquarium as MBARI’s education and conservation partner. Together, we brought the deep sea to land in the new Into the Deep exhibition. It’s my hope that the volunteers in this exhibition can help inspire future generations to care about an environment that’s the largest living space on Earth, but one we still know so little about,” Matsumoto said, as reported by Phys.org.

According to the National Oceanic and Atmospheric Administration (NOAA), more than 80 percent of the ocean remains unobserved, unmapped and unexplored, and it is estimated by scientists that 91 percent of ocean species have not yet been classified.

More than 225 new species have been documented by MBARI researchers in the past 34 years, Phys.org reported.

Plastic pollution, overfishing, habitat destruction and the climate crisis affect the ocean’s depths as well as its coastal areas.

“These remarkable new jellies underscore how much we still have to learn about the deep sea. On just about every dive into the depths of Monterey Bay, we learn something new,” Matsumoto said, as reported by Phys.org. “MBARI’s work to understand the ocean is more urgent than ever as the deep sea and the animals that live there face a growing number of threats. We cannot protect life in the deep sea unless we understand it first.”