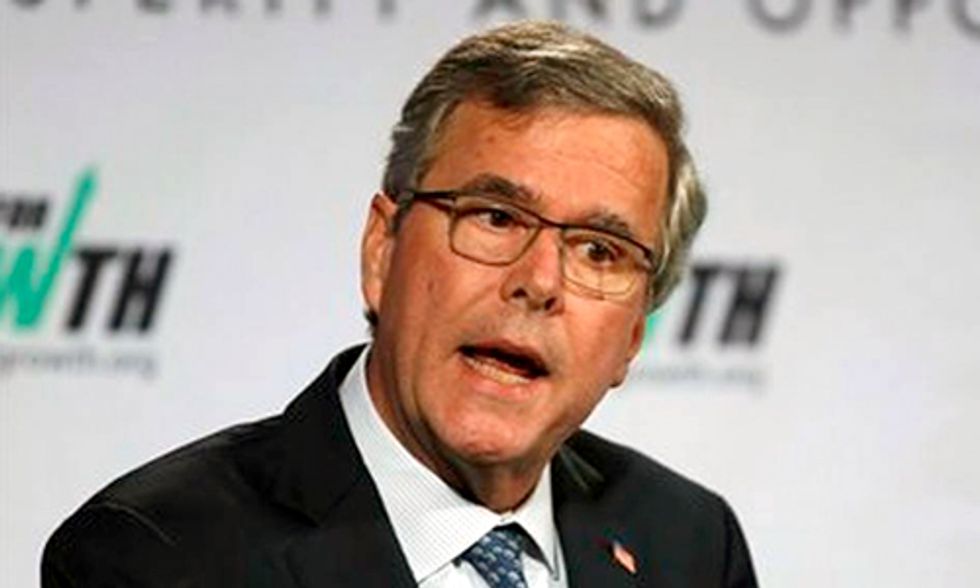 Jeb Bush trashed the Clean Air Act last week. He was speaking to the far right-wing Club for Growth, notorious for mounting mostly unsuccessful challenges from the right against Republican candidates during congressional primaries.

So Jeb Bush thinks the Clean Air Act “stifled the ability for people to rise up.” Does he mean polluting corporations that a 5-4 Supreme Court says are people?

Or does he mean that loud clamor for "rising up" by ordinary Americans, who consistently voice very strong support for the Clean Air Act and clean air safeguards, with large majorities across the political spectrum Bob Marley, Mr. Bush ain’t.

Jeb Bush’s father, President George H.W. Bush, signed the Clean Air Act Amendments of 1990 after 89 Senators and 401 House members (including 154 Republicans, all but 16) voted for the law.

President Bush’s signing statement said he took “great pleasure in signing [the Clean Air Act] as a demonstration to the American people of my determination that each and every American shall breathe clean air.”

Newspapers at the time called the president’s signing of the Clean Air Act Amendments of 1990 “the single most distinguished policy achievement of the Bush administration.”

The Clean Air Act is estimated to achieve almost $2 trillion in yearly benefits to the American people by 2020. These vast benefits are delivered in the form of “significant reductions in air pollution” related premature death and illness, improved economic welfare of Americans, and better environmental conditions.” The estimated annual costs to achieve these benefits will be about $65 billion by 2020.

So this staggering Bush senior achievement is one that Bush junior singles out for condemnation. It’s bewildering. One might even say it takes one’s breath away.

Does Jeb Bush know of any federal law that accomplishes greater benefits for Americans relative to the cost? Would a law personally acceptable to him need to achieve $3 trillion in benefits compared to an even tinier fraction of costs? Mr. Bush’s applause line for the extreme right does not yield those answers.

Clean Air Act benefits vastly outweighs costs over the entire study period in this exhibit. But what about any impacts to economic growth due to Clean Air Act implementation?

This chart shows that over the period from 1990 through 2008, primarily due to the Clean Air Act Amendments of 1990 signed by President Bush, U.S. Gross Domestic Product increased by more than 64 percent while the six most common air pollutants regulated by the Act decreased 41 percent.

I cannot help but wonder whether a related clean air benefit prompted Jeb Bush’s condemnation of airline regulations. Does he mean another law signed by his father, one that “banned smoking on all domestic flights of less than six hours?”

I cannot tell you how many flights I have been on since then where stifled passengers were loudly demanding the right to rise up and fill airplane cabins with choking tobacco smoke.

Jeb Bush tells Club for Growth that "the first priority for the conservative cause" should be "growth at all cost."

It makes you wonder what Bush would have said if he were speaking to the Hair Club for Men.

That “growth at all cost” mentality reminded me of an article I had read: “To Tackle Pollution, China to Drop Pursuit of Growth at All Costs.” The “growth at all cost” vision thing espoused by Bush has resulted in China having some of the most despoiled and deadly air pollution in the world.

The Chinese people are rising up alright—against dangerous air pollution.

“But, but,” Bush would protest, “that’s an unfair comparison. America’s air quality is nowhere near as bad as China’s.”

Exactly. Thanks to the Clean Air Act that Jeb Bush’s father called “the most significant air pollution legislation in our nation’s history,” a law that “restores America’s place as the global leader in environmental protection.”

Watch Sen. Inhofe Throw a Snowball on Senate Floor to Prove Climate Change Is a ‘Hoax’