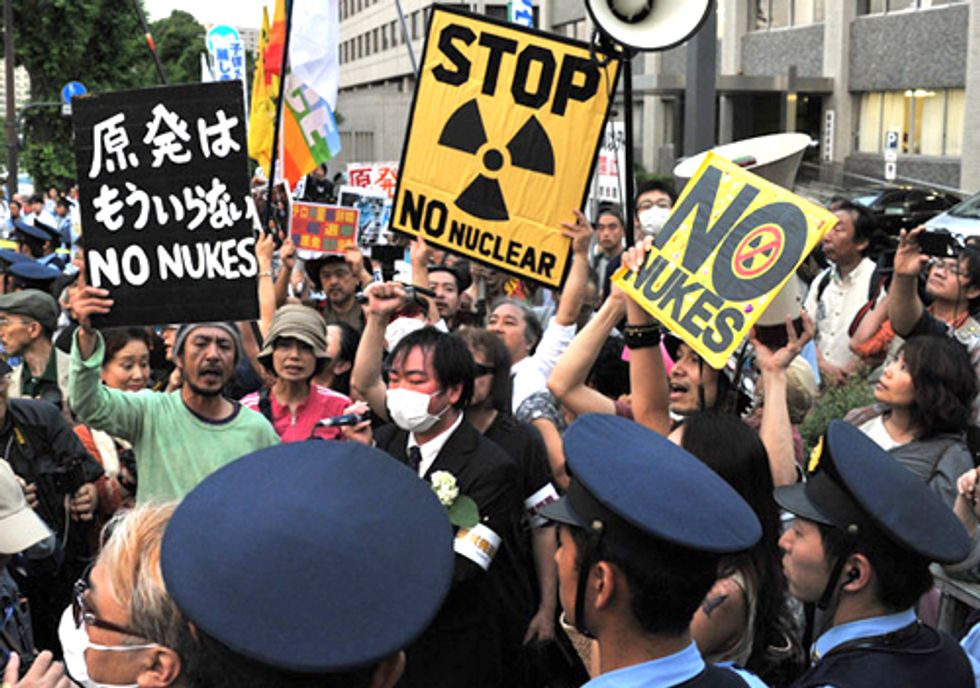 As demonstrators from the Coalition Against Nukes prepare to descend on Washington, DC and the Nuclear Regulatory Commission, the world's third-largest economy has taken a landmark step toward Solartopia.

A pro-nuclear Japanese government has announced it will phase out all commercial reactors by 2040.

It comes as atomic power continues to plummet and reactors go dark in Germany, France, Quebec, California and elsewhere.

Japan's announcement has gotten mixed domestic reviews. Powerful industrial leaders say it's unrealistic. Some reports indicate the government intends to proceed with new reactors already on order. But a burgeoning grassroots No Nukes movement is demanding a faster phase-out of existing reactors and is sure to put up fierce resistance to any new ones being built, whether they're on the books now or not.

In any event, this latest announcement, coming from an intensely pro-nuclear administration, virtually rules out Japan's long-standing vision of building a new generation of large commercial reactors. So much for the Japanese edition of the "nuclear renaissance."

In principle, Japan has joined Germany in moving to end the nuclear age. The world's fourth-largest economy—the biggest in Europe—Germany has shut 8 of its 19 reactors and will have the rest down by 2022. Like Japan, Germany has been at the core of the global reactor industry, and once harbored plans for many more. Now it has plunged deep into the business of renewables, with heavy emphasis on wind and solar.

All but two of Japan's fifty-plus reactors remain shut. Its No Nukes movement has soared since Fukushima, with mass marches frequently in the tens of thousands. Despite dire industry predictions, Japan survived a nuke-free summer without major blackouts.

The aggressively pro-nuclear administration of Noda Yoshihiko has met fierce grassroots resistance against forcing open two reactors, and is expected to lose upcoming elections. Its advocacy of a long phase-out was meant to placate both industrial and No Nukes interests, but has angered both.

Japan remains at the center of the global industry. Key heavy components are still manufactured there. But bitter debate about the health impacts of Fukushima has escalated. New reports cast serious doubt on the integrity of safety regulations, and on the wisdom of siting so many reactors near earthquake faults and in coastal areas threatened by tsunamis.

The industry's decline has been accelerated in France, where the new Socialist Prime Minister Francois Hollande says he'll shut an embattled reactor at Fessenheim "as soon as possible." Public opinion polls show substantial support for a shift to renewables.

A new government in Quebec will shut Gentilly II. In California, new reports on the cold San Onofre 2 & 3 indicate deep problems that make a re-start more doubtful than ever. And a whistleblower has warned that flood damage at Nebraska's Ft. Calhoun reactor may be more serious than previously believed.

Riding the wave of anti-nuclear news is a Sept. 20-22 series of DC events organized by the Coalition Against Nukes. The action starts Thursday with a rally on the Capitol Mall, a Congressional briefing and an evening gathering and concert. Friday opens with a ceremony at the Native American Museum, followed by a demonstration at the Nuclear Regulatory Commission in Rockville, Maryland, and evening film showings at DC's Letelier Theater. Saturday concludes with a day-long strategy session. With activists convening from around the US and Japan, the gathering promises to lend the No Nukes movement new focus.

They'll be dissecting an industry in steep decline. Germany and Japan's phase-out decisions mean two of the industry's key players will build no more nukes. The four reactors barely under construction in the US are already plagued with structural and financial problems, and are under intense political fire.

China has yet to decide what it will do in the wake of Fukushima. India is being rocked by huge demonstrations at the Koodankulam complex. Russia and South Korea remain in the hunt, but it's unclear how far they can go with a global complex on the brink of implosion.

Then there's Iran. Before 1979 the U.S. and France wanted the Shah to build 36 reactors. Now there's talk of war over a "Peaceful Atom" that many believe could lead to an Iranian Bomb.

All-in-all, the "nuclear renaissance" is in serious relapse. General Electric's Jeffrey Immelt has portrayed atomic energy as an obsolete, uneconomic alternative despite his company being one of its major pioneers.

As Germany, Japan, France, Quebec and so many others leap toward Solartopia, the future of wind, solar and a green-powered future looks ever more promising.